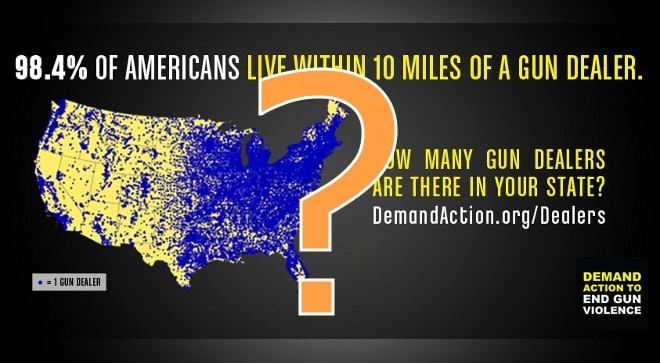 Whether or not you realize it, you probably live in walking distance from a Federal Firearms Licensee. A recent map of the U.S. by Mayors Against Illegal Guns shows just how much of the country — 98.4 percent — lives within 10 miles of a Type 1 or 2 FFL, an agency capable of performing a background check.

Their argument is that it is not an inconvenience to mandate background checks for all gun transfers, including personal sales. We get it, we don’t want the wrong people to get a hold of guns, either. But what MAIG doesn’t get is that the FFL system isn’t tailored for this.

There are nine different kinds of FFL, including types that don’t do background checks. A Type 3 can only deal in Curio & Relic firearms, a Type 8 can only import guns, and so on.

The majority of FFLs are legally allowed to act as dealers, but that doesn’t mean that it is their practice. Many companies, particularly manufacturers, the most common type of FFL, work through distributors who ship products to actual firearm dealers. It’s quite uncommon for manufacturers to also act as dealers and in reality, you might live in a place that is just hopping with FFLs and still be nowhere near a gun store that can or will perform a background check; it’s just not in their business model.

Still, just because someone runs a “gun store” — Type 1 FFLs — many of these include small businesses, online gun stores that don’t have a physical storefront, and headquarters and corporate locations of gun stores, that are FFLs that sell guns through other FFLs and don’t do background checks at all.

In the end, we don’t disagree; given the commonplace nature of gun stores, finding one that’s willing to perform a background check is arguably only inconvenient for a small percentage of the population, people who live, if not off, at least on the very edge of the grid.

But that’s just an inconvenience in a practical way. In truth, mandatory background checks present a serious moral and legal concern.

First of all, FFLs are not allowed to transfer handguns to anyone under the age of 21. Universal background checks would effectively strip an entire division of the population of the right to bear one of the most common classes of firearm.

Even if a legal exception is made for transfers within immediate family, it would still be illegal for a 20-year-old to give a parent money to buy them a handgun, that’s a straw purchase. The only legal way for those between 18 and 20 to practice their Second Amendment rights with a handgun would be if they received one as a gift.

There is the ever-present registration argument against the practice of mandatory background checks as well. While the records are maintained by the gun dealer, the ATF has the ability to audit background check records and keep the information. While gun registries are illegal under the Firearm Owner Protection Act, the audit system is a legal grey area, and can be easily abused as a makeshift gun registry.

Then there’s the money. Background checks aren’t free; for the person dropping $1,000 on a new SIG a $40 background check might not be a big deal, but for the single parent buying a used service revolver for  $100 might mean the difference between getting that gun and going home empty-handed.

But more the point, it’s a tax on a right, which is not Constitutional. You don’t have to pay money to be allowed to practice a religion or buy a license to protect your home from unlawful searches. You don’t have to hire a jury pool for a trial by your peers.

Some argue that there are fees associated with practicing rights, such as filing for a permit for a public event, and that justifies paying for the right to keep and bear arms; but with universal background checks, you pay a tax for every transfer. This is sweeping, all-encompasing. It would make you pay for the most basic element of practicing a right, not one specific type of Second Amendment activity.

Then there’s the matter of what constitutes a transfer. Can you share a gun with a roomate, friend, boyfriend or girlfriend, or even spouse? Can you will a gun to your children? Can you loan your gun to a friend? According to the ATF, not without a background check.

“Neither the GCA nor its implementing regulations define the term ‘transfer.’ The common legal definition of ‘transfer’ broadly encompasses any method of disposing of an asset. A ‘transfer’ includes any change in dominion or control of a firearm, whether temporary or permanent, commercial or noncommercial. A change in dominion or control may occur even when such change does not convey title to the firearm.”

If universal background checks become law, it will be illegal to loan a gun to friend at the range without first stopping by at a gun store and paying for that background check.

After you go shooting, you’ll probably want to stop by that gun store again, if it’s still open, if you want your gun back.

And the right to gun ownership would be the only right that people would be presumed not to have. Unlike every other Constitutional right, mandatory background checks cut to the very core of the Second Amendment. You would not have the right to keep and bear arms. Not without proving otherwise, first.

Universal background checks are noble in a narrow sense. They’re trying to do a good thing. But the way background checks work and the way transfers are considered legally, it’s not a fix; it will make potential felons of gun owners everywhere, and it makes a mockery of the Second Amendment.

Background checks may not be physically inconvenient, but legally and morally, they present a critical inconvenience.