Sikhism is a religion born in Punjab, the part of the world where India and Pakistan meet. It’s thousands of square miles that has been at the heart of many conflicts well before it was conquered by Alexander the Great, and many more since then. It is at the center of not just national, but religious crossroads, home to Hindus, Muslims, Jainists, Christians and Buddhists.

Sikhs have been defined as warrior-saints and in many ways maintain a warrior culture to this day; Sikh men and women wear five articles of faith, including the kirpan, an often ornate sword or dagger.

The weapon is not merely symbolic. It may look decorative, but is a physical means to protect yourself, and dharma — the universal law and order that upholds the universe. The belief that you must seek out justice for all mankind is paramount to Sikhs, by any means necessary.

Sikhs have, over centuries, added new “shastar” —  weapons — to the arms they bear to keep themselves spiritually and physically whole, having incorporated them into martial arts like “gatka” and “shastar vidiya” —  literally “the science of weapons” —  at first with staves and swords and more recently, when the technology came about, firearms.

And that is why a Yuba City, Cali. Sikh has filed suit against the state. He claims that the California “assault weapon” ban is a violation of his First Amendment right of freedom of religion.

“I feel that modern weapons like the assault rifle or the semi-automatic pistols that have magazines with ten or rounds would be essential in today’s society in order to defend ourselves,” argued Gursant Singh Khalsa, in opposition to California’s intense gun control laws. “This is very restrictive of my religious beliefs.” 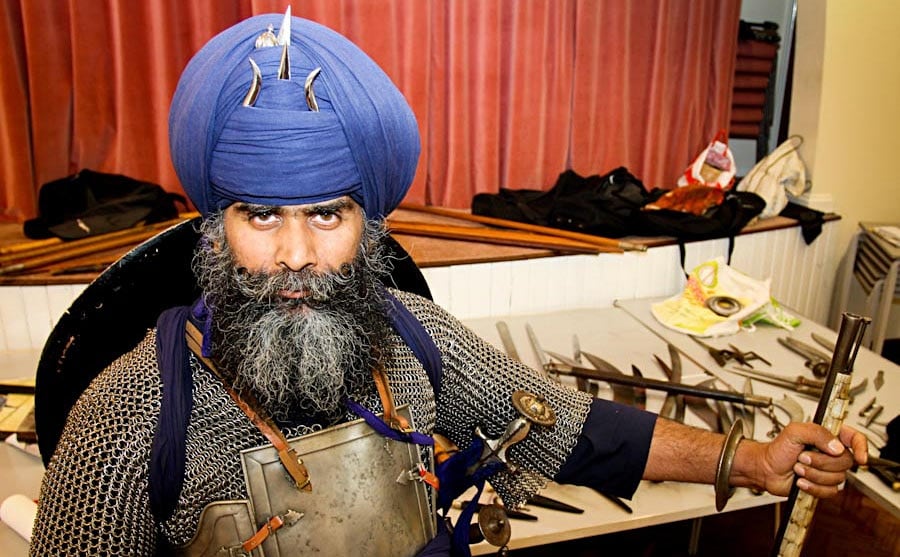 A Sikh (Nidar Singh) and his gun.

Sikhs were very recently the target of a nationally-witnessed act of aggression, when white supremecist Wade Michael Page fatally shot six people and wounded four others in a mass shooting at a Sikh temple preparing for a community dinner in Oak Creek, Wisconsin.

Elder Satwant Singh Kaleka was one of the victims; he died attacking Page with his knife, slowing him down so that others could escape.

Sikhs have been increasingly targeted by violent actors across America following 9/11, often being mistaken for Muslims because of their turbans, another article of Sikh faith.

“We should have all suitable weapons that enable us to defend ourselves and to defend others,” said Khalsa.

John Sims, a Pacific McGeorge Law School professor, believes otherwise, pointing out that Khalsa and other Sikhs do have access to legal firearms, and that they don’t need high-capacity magazines or “assault rifles” in order to protect themselves.

“In religious terms the possession of an assault rifle is absolutely essential, that seems to me to be a pretty dubious argument,” he said.

This isn’t the first time Sikhs have fought to maintain their articles of faith. In the past they’ve fought governments for the right to wear the turban instead of prescribed headgear (or lack thereof) in schools, on motorcycles, on duty and in uniform, and the right to carry their blades in the U.S. and around the world in places where knife control laws would prevent them from doing so.

In the U.S., Sikhs have won court cases that have allowed them to carry the kirpan, to greater or lesser degrees, on the basis of Constitutionality.

This case will rest on whether or not the court will accept the notion that the weapons of Sikhism are not limited to cold steel, deciding whether or not a person has the spiritual right to defend themselves with the best weapons they can use.