In 2013, the firearms carried by the regular soldiers, sailors, airmen, and marines of the US military are among the best in the world. In some cases, these guns represent more than a century of continually evolving designs while others are about as new and visionary as we’ve ever seen.

Although very similar in profile to the Vietnam-era M16 and civilian AR-15, the M4A1 carbine, currently the standard front line rifle of the US military, is something altogether different. Much shorter, its 14.5-inch barrel and collapsible stock gives an overall length of just 29.75-inches, nearly a foot shorter than the M16A4 that it supplemented in 1994 (as the 3-round burst capable M4) and has now largely replaced. 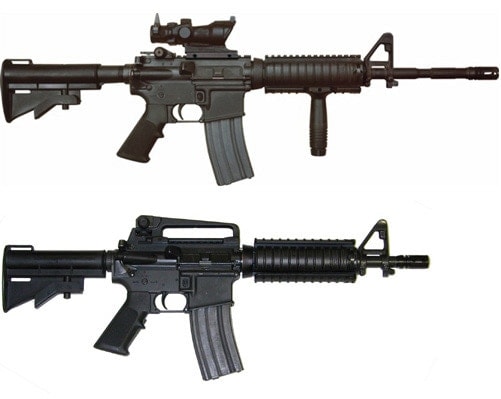 With a loaded 30-round magazine but without optics, it tips the scales at 6.9-pounds, a two-pound weight loss over older rifles. The M4A1, with a profile not much longer than pistol caliber submachine guns, has led to the near elimination of 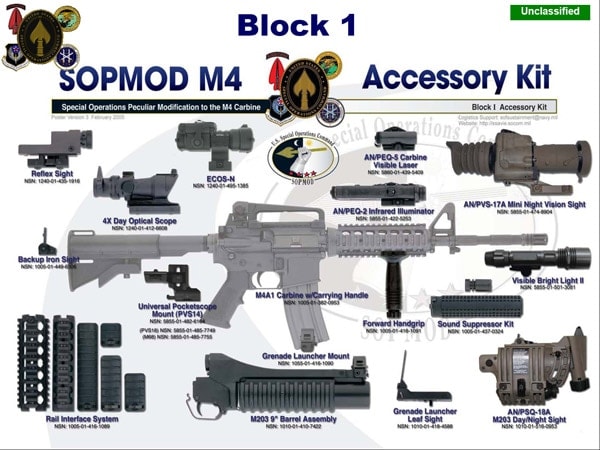 such 1980s and 90s classic room-brooms as the H&K MP5 and S&W M76s in service with special operations units. The “S-1-F” trigger group of the A1 model also returns a true select-fire capability to the average grunt.

One of the biggest advantages of the M4 over older M16 series rifles is the use of a wide range of optics including Trijicon’s ACOG, Eotech and Aimpoint reflex sights, AN/PEQ-2A visible laser/infrared designators, PNV equipment, and other accessories. Many rifles in combat units are modified 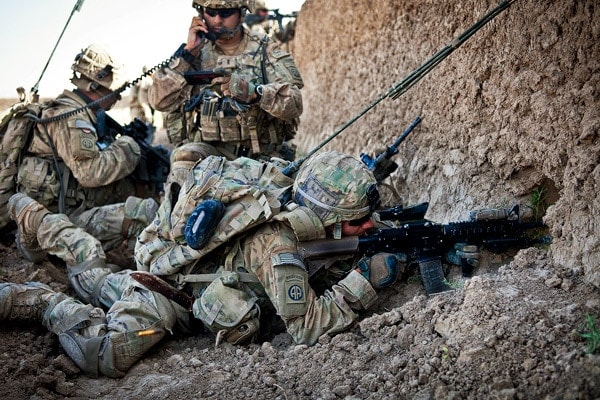 with commercial off the shelf accessories that are not standard issue, often bought with unit funds. This means that for the first time the average soldier frequently carries highly modified rifles into the field, and in some cases, almost no two are identically equipped.

Currently the US Army is testing several 5.56mm designs that include the  FN FNAC, the HK416A5, the Beretta ARX-160, Colt Enhanced (piston equipped) M4, and others in their Individual Carbine program. Up to 550,000 of the winning design will be ordered sometime after 2015 to replace the current M4A1 and remaining legacy M16A2/A4s in service with the big green.

The standard sidearm for most of the US military today is the Beretta-designed and built 9x19mm M9A1 pistol. Based on the company’s Model 92 that was invented in 1975 and first sold to CONSUBIN 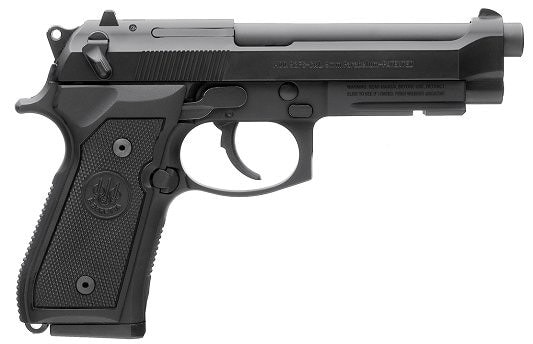 (the Italian Navy “SEAL” teams) and the Brazilian Army, this Beretta in one form or another has been the official issue sidearm of the military since 1985. In the past 27 years some 600,000 have been delivered to the Department of Defense and in September 2012 a contract was signed for up to another 100,000.

The standard M9 was less than popular with the troops in CENTCOM operations due to extensive wear on legacy weapons and poorly constructed magazines supplied by contractors. This led to the M9A1 update, which uses increased capacity (17-round) PVD coated magazines, removable front sight, accessory rail, a captive recoil spring assembly, a rounded trigger guard, and a frame recoil buffer. The 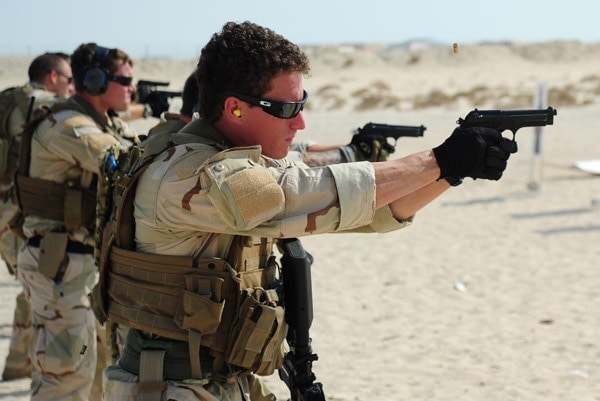 M9 on the practice range.

pistol is 33.9-ounces unloaded, and is 8.5-inches overall with a 4.9-inch barrel, which is almost the exact dimensions of the M1911A1 pistol it was meant to replace.

Speaking of 1911s, the Marines have clung to their .45s for most of the DOD’s Beretta era. First, they used WWII-era frames that were rebuilt by Marine armorers and when these wore out, they issued their own contract for new guns from Colt complete with forward under barrel rails on the frame. Further augmenting the Beretta are large numbers of SIG Sauer P226, 228 (M11), and 229 pistols bought by the Navy Seals, Coast Guard, NCIS, Army CID, and MP units over the past three decades.

While marksmanship across the military, and especially for the trigger pulling grunts, is emphasized, there are a number of sniper weapon’s systems issued to specially trained military snipers.

The use of the word ‘system’ for these weapons is very telling as these devices encompass not only the rifle platform but also top of the line optics, match grade special purpose ammunition, and other 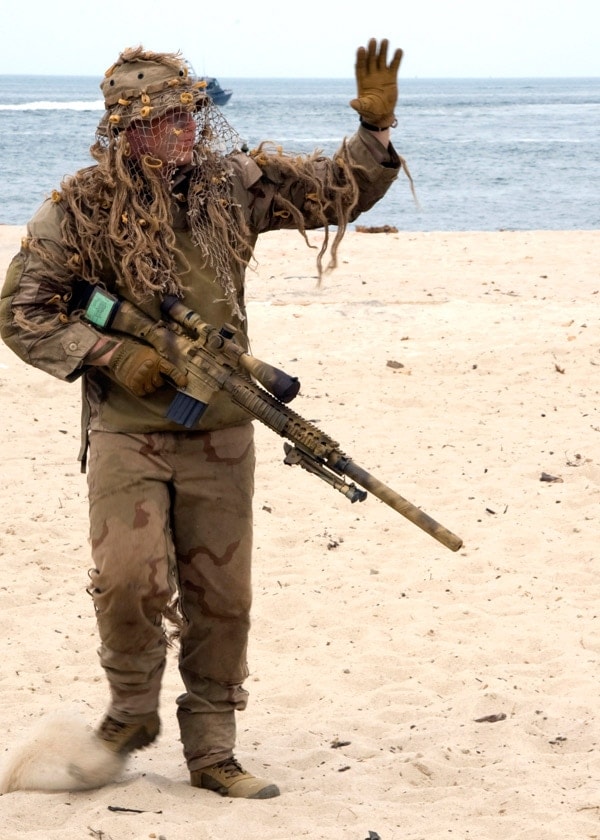 accessories to help the shooter take the perfect shot.  These include the M40A5, based on a short action Remington 700, for the USMC; the M24A2, based on the long action Remington 700, and the AR-style M110 for the Army; all chambered in 7.62x51mm NATO. In .300 Win Mag are the U.S. Navy Mk.13 MOD 5 SWS and US Army M24E1 SWS. The ultra-long range .338 Laupa is being used on the Army’s M24A3 and the Navy’s Mk 13 Mod 2 using an AICS 2.0 stock and a Remington 700 based receiver. With so many variants and sub variants of these specialist’s rifles, further examination is outside the scope of this humble article.

With 12-gauge combat shotguns carried by US troops since for the past century, scatterguns have long been a part of military culture and issue. The M26 Modular Accessory Shotgun System (MASS), in production since 2010, is set to replace many of the legacy Mossberg 500, 590 and Remington 870 pump guns and Benelli M4 gas-operated shotguns currently on hand.

The thinking behind the M26 is radical in and of itself but to put it in perspective, unlike dozens of previous designs used by the military since 1900, it is the first of its type that did not start life as a commercial shotgun.

Neither pump action nor semi-auto, the M26 is a strait-pull bolt-action weapon. Instead of using a under barrel tubular magazine, it has a detachable box magazine. Designed as either a 2.75-pound, 16.5-inch gun that can be mounted under the front barrel of a standard M16A2/M4 rifle, or in a 4-pound, 24-inch standalone weapon, the M26 brings many options to the table. Not designed as a primary weapon for combat use, it is instead to be used by MP and engineer units and as a supplemental gun with the infantry.

Collectability of these firearms

Semi-auto “M4-ery” rifles, tricked out long range precision rifles based on Remington 700s, SIG 226’s with anchors on the slide, Beretta 92s, and any number of shotguns equipped with collapsible stocks and/or heat shields are all on the list of most popular firearms in the country.  Currently, these and the real thing are poised to become even more sought after firearms.

Then of course, there are replicas and airsoft stuff, but we aren’t getting into all that except to say that imitation is the most sincere form of flattery.