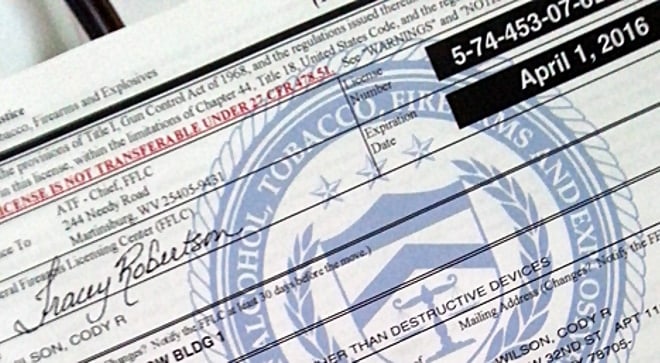 Defense Distributed, the organization behind the Wiki Weapon project — 3D printing guns — has obtained a Federal Firearms License. This allows them to sell their guns and manufacture certain classes of firearm that were previously prohibited to them, including machine guns.

DefDist doesn’t have the capability to print complete firearms, but they have developed a working AR-15 lower receiver, which is technically a firearm, which works with common AR-15 parts kits and uppers. They’ve also developed 3D-printed magazines.

None of this is illegal, no matter how controversial it is. There are some restrictions on what DefDist could do with their Wiki Weapons prior to securing their FFL. Without it, they could not sell their 3D-printed AR lowers and were restricted to making only semi-automatic, non-NFA-regulated guns.

“The big thing it allows me to do is that it makes me manufacture under the law — everything that manufacturers are allowed to do,” said Defense Distributed founder Cody Wilson. “I can sell some of the pieces that we’ve been making. I can do firearms transactions and transport.”

Specifically, their FFL 7 allows them to manufacture machine guns, short-barreled rifles, short-barreled shotguns, destructive devices, silencers and “any other weapons,” a catch-all for exotic and oddball firearms like cane guns and smooth-bore pistols.

We doubt that Defense Distributed is looking to primarily sell guns — at least right now — and that this is largely for the ability to manufacture the types of firearms that really stress their 3D printed parts. They’ll be able to say with confidence that their 3D printed AR-15 lowers and magazines are ready for mainstream use if they can withstand the rigors of sustained fully-automatic machine gun fire. Without an FFL, it wouldn’t be legal for DefDist to test this theory.

DefDist has been working on their designs for nearly a year now, with their early prototypes breaking after just a handful of shots and current receivers standing up to many hundreds of rounds. Shortly, we suspect the world will find out how the Wiki Weapon fares in full-auto.

Also, having an FFL legally protects Defense Distributed if they decide to “crowd-source” lower testing. This opens up the door to printing out a gross of these parts and letting the greater gun world try them out, see what they can take.

Again though, it is possible for DefDist to sell their lowers, and we’re willing to bet that there is a market for them, mainly for people who are looking for a way to financially support the organization and want something physical back in return.

“In a way it’s like we’re just beginning — I’m not going to begin until we have that SOT,” Wilson continued. “[We’re going to] sell some of the stuff we’ve already made, we’ll probably make some stuff to sell and that will be a better way of covering the prototyping.”

Defense Distributed has been running on donations since the beginning, and may want to look at manufacturing as a source of income to prop up their interests as a “subversive” 3D printing developer.

The long-term goals for Defense Distributed aren’t limited to firearms. They want to expand the possibilities of 3D printing many regulated commodities, including patent-regulated goods like drugs and medicine. If they hope to expand on these emerging technologies, they’re going to need a lot more than just donations.

Would you buy a DefDist 3D-printed AR lower? What would it take?