Too often I find that skilled shooters who don’t have an understanding of situational awareness, or don’t think about it or practice it enough, will fail under a little bit of stress at the range.

Failing at the range is fine, but failing during a real world defensive encounter is quite another thing—and something that is often over (sometimes with deadly consequences) before the blissfully unaware even know it has started.

If situational awareness is the skill to identify a threat, then tactical readiness deals with the advantages you’ll need to capitalize on in order to defeat an imminent attack: Things like speed, approach, tactics, and control.  If a firefight cannot be avoided, wouldn’t the best time to prepare for how to act be right now?

Here are five key principles tied to the concept of tactical readiness that you should closely examine in your training sessions, remember and add to your tactical repertoire.

No matter how you look at it, the unifying theme here is speed. If speed was the ruler that the Old West gunslinger was to be judged by, very little has changed today. It all comes down to how quickly you can react and successfully perform all the little ancillary moves conspiring to slow you down. Here are a couple of examples:

How many times have you failed to take your weapon off “safe” before attempting to pull the trigger? Next time you are at the range and this happens to you, take a moment and just say to yourself “I’m dead”.  On an AR style platform, for instance, shooters should rest the thumb of their shooting hand on top of the safety selector switch (yes, even for southpaws who don’t sport an ambidextrous-safety selector). Pistol shooters (who carry with the safety on) need to practice removing the safety with every round they draw and fire to the point that putting the weapon on “fire” becomes an automatic, muscle memory response. 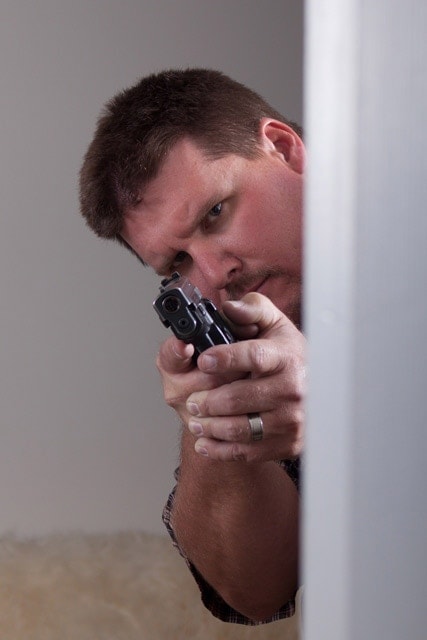 Practicing removing the safety with each draw/shot combo will help make incorporate the motion into your muscle memory.

What about when you have to conduct an immediate action drill in the event of a misfire / failure to feed? Malfunctions need to be dealt with quickly and efficiently to get you back in the gunfight as soon as possible.  Regardless of whether it’s with a semi-auto pistol, a shotgun or an AR-15, the malfunction clearance needs to happen up high, at about shoulder height.

Malfunctions and reloading should take place in the vision of the shooter, where he/she can get back on target quickly.  By dropping your hands (and weapon) down low to deal with the problem, both the gun and your eyes will be taken totally off target. The half-second it takes to raise your gun and acquire the target may be your last.

An action is inherently faster than a reaction, so it stands to reason that being reactive puts self-defense shooters slightly behind the power curve. This presents a bit of a paradox for the defense minded because the law of the land often demands that the victim is the reactive party.  Though overzealousness can lead to serious legal consequences, there are skills that tactically ready shooters can foster that can even the playing field.

The most important of these is to spot the threat as soon as possible and this comes with developing situational awareness—that six sense or warrior’s gift that tells those in tune with their surroundings who and what to watch. But beyond identifying where and who the threat is, it’s almost just as important to have a strong grasp of your terrain and situation.  An understanding of these two elements will dictate your tactics.

In support of this, remember and practice the three-foot rule. If you are facing a threat and you are 3-feet away from cover (not concealment), get there ASAP. If not, engage the threat if necessary. Shooting while moving to cover is a great option here (throwing a little firepower at an assailant will likely force him to seek cover himself) and you definitely don’t want to be OTF — Out There Flapping— all alone without cover when someone has the potential to use a gun against you.

Do not fall victim to the thinking a gunfight will be like a Mexican stand-off (seen far too often in the movies), with you and another guy standing with guns pointed at each other wondering who’ll shoot who first. Gunfights are dynamic so get to cover and know how to use your weapon well.

The guy who succeeds against unbelievable odds has the drive to win, the will to survive and the fighting attitude that believes both. A winning attitude is a symptom of confidence and confidence is paramount to success in battle.

We develop confidence by overcoming obstacles and bad days at the range, proving to ourselves that, through discipline and focus, we can rely on our abilities to get the job done. In kind, real confidence cannot be developed without practicing things you can’t do and skills you don’t yet have.

A confident attitude essentially comes with being mentally prepared for every situation and a lot of being well prepared springs out of first hand experiences. I find this means for a lot of shooters not just shooting at practice static targets from a static position, but engaging in realistic training scenarios with elevated physical activity and the threat of consequences for mistakes.

This type of training can take the form of run n’ gun courses with live rounds but I think some of the best dynamic defense shooting practice for civilians are things like paintball, Airsoft or training with dye-marking rounds.  Training like this can be highly reality based and players receive some physical, though not serious, pain when they make a mistake. As most athletes know well, pain is weakness leaving the body.

A professional baseball player knows how many outs there are and what base to throw the ball to should it come his way. The same goes for those with the warrior mentality. Deciding and drilling what actions to take long before – maybe even years before – an attack could mean the difference between being a victim or a survivor. In fact, the very decision to purchase a handgun, investing in a quality holster, storing a gun in a quick access safe in your den or obtaining a CCW in order to legally carry concealed, are some of the most basic examples of pre-determined tactics.

Moving on to the more tactical level, pre-determined tactics cover things like your approach in different 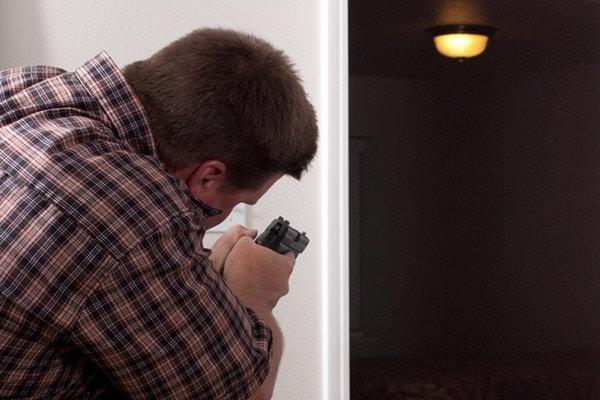 Predetermining the shooting lanes in your house with a good vantage point and a minimal risk of over-penetration.

How about a mall or a high school football game? What would you do if someone started shooting? What if they tackled you? What about a home invasion?  How would you protect your family?

Determining a game plan before violence befalls you is essential tactical readiness and I recommend workshopping all of your domiciles, places of work, etc. and developing basic defense strategies. Consider what you’d do if you were with your family as protecting them first is likely priority.

In crowds, the biggest concern is hitting an innocent by-stander so depending on where you are, the best plan may be to head for cover or leave the area. Situation dependent however, you may have the chance to get close enough to take a kill shot without a fear of crossfire or over penetration and save a lot of lives. Thing is though, you won’t do either of these things if you don’t think about them first.

Techniques may give anybody a basic defense platform but the truth is that in most deadly encounters, violence of action wins. Aggressiveness, even though it may be against our more sensitive natures, is what all shooters need to practice in their defense training but this is not a Dr. Jekyll and Mr. Hyde approach.  The violence needs to be controlled as well; uncontrolled rage is blind and gets people hurt or killed.

Controlling the use of your skills and training one possesses, aside from being a sign of maturity and mental health, is the safest and most effective way to engage any target. Knowing the right move (pre-determined tactics) and acting deliberating with extreme force is an example of controlled violence.  When the switch from civilized and gentle demeanor must occur – and it may occur very rapidly – a calm, rational but aggressive side needs to appear.