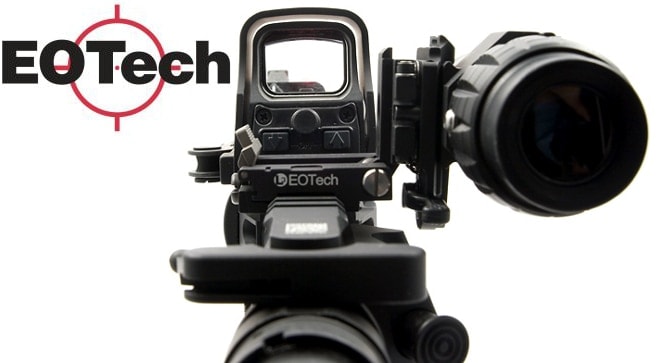 As of March of 2013, EOTech has sold their millionth holographic sight. After 18 years of production, the company has reached a major landmark and is celebrating it in a major way, with a series of giveaways that will run from now until the end of the year.

EOTech is one of the preeminent firearm optic manufacturers in the world, with their hardware on hunting, competition shooting and fighting rifles everywhere.

Ed Schoppman, EOTech vice president stated that “The recognition of this 1 millionth sight milestone is our way to give something back and share our gratitude and appreciation for all the support our various customers have given us throughout the years.”

The giveaways will be posted to their Facebook page, with several slated for every week and Guns.com really likes how they’re determining winners. The rub’s that every holographic weapon sight and magnifier kit will be awarded to the first person to unravel a mini-mystery with each giveaway.

The majority of the giveaways will be  EXPS3-0 and G33 kits, which include both a holo sight and a flip-out magnifier. There are some optics out there that are better for some things, but in our experience few are better for all things than a zero-power optic coupled with a fixed magnifier. The EXPS3 is compact and rugged and gets alright batter life. Unlike early EOTech sights, the EXPS3 has a transverse-mount battery that is not recoil-sensitive. The -0 designation means it has the standard circle-dot crosshair reticle (as in the EOTech logo above).

These are probably EOTech’s most popular optics, and are a personal favorite around here.

EOTech will be posting a new video every week, laden with clues. Participants who guess the location correctly will be rewarded with EOTech swag.

Every commentor who guesses will be entered to win the Grand Prize at the end of the year. The weekly prizes will include:

And the Grand Prize includes:

If you’re aching to get a hold of one of their premium, combat-proven optics, for no money, this should make you happy. And it also says loads about EOTech. So go on, head over to their Facebook page.