With Gov. Martin O’Malley’s gun control bill on the horizon, Marylanders are coming out in droves to buy guns, which isn’t surprising. Everyone who lives in states where their respective legislature is considering bills that would undermine one’s rights to keep and bear arms is doing the same thing: buying a desired gun or gun-related accessory before it’s banned.

Though, in the Free State, one consequence of this increase demand for guns is a flood of firearms applications to the Maryland State Police, the agency responsible for conducting background checks and processing the paperwork for “regulated firearms,” i.e. all handguns and most modern sporting rifles.

Transactions involving other firearms – traditional long guns – are run through the FBI’s National Instant Criminal Background Check System, which is not always reliable but is somewhat functional and reasonably quick — all things considered.

So, in any event, the Maryland State Police are overwhelmed with gun applications, as a result wait times for one to receive his/her regulated firearm has exploded past the usual seven-day window and is now taking more than a month to process, the Associated Press reports.

To meet the demand, the licensing division of the MSP is working 21 hours a day, seven days a week.

“The only reason we aren’t working 24 hours a day is the computer system is down for maintenance three hours a day,” Sgt. Marc Black, MSP spokesman, told DelmarvaNow.com.

Additionally, the MSP is working to increase its manpower in licensing division, pulling about 60 people from other units and training them on how to process the paperwork and conduct the background check.

Yet, these efforts provide little solace for gun purchasers waiting in excess of four weeks for a firearm they just paid for.

“There is no reason for this backlog — it’s ridiculous,” said Bob Arthur, owner of the Shooters Supply in Berlin, Maryland.

“Customers are also getting frustrated,” he added, “especially when the gun they paid for has to be tagged and locked away.” 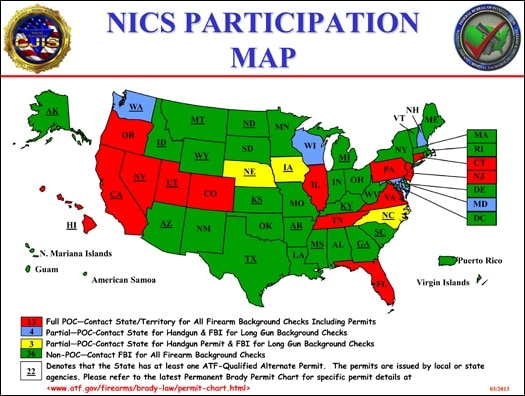 Arthur is right, there is no reason for the backlog. Given the circumstances, many have argued that the MSP should scrap their added and unnecessary rigmarole and simply use NICS for the background checks on all firearms (like many other states, see map). This would definitely speed things up.

However, the state police are not willing to abandon their protocol to make things move more smoothly.

“The Maryland State Police will not sacrifice speed for safety, so each application will be given the dedication and time it deserves to be processed correctly,” Black said. “Our main objective is to make sure a prohibited person is not allowed to possess a firearm.”