Americans have long had a fascination with arming airplanes. In 1912 when the aeroplane was only just 9-years old, a US Army officer brought a Lewis machinegun up for a test flight, zipping rounds at targets on the ground below. An observer at the time asked, “Why would you want to put a machine gun in an airplane?” Well the ultimate evolution of that is the AC-130 Specter gunship.

In 1967, the Air Force was flying a series of converted WWII-era twin-engine C-47 transports around 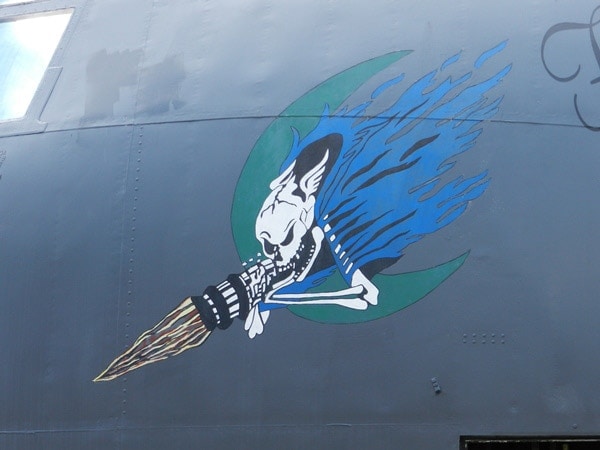 South East Asia on close air support missions. These C-47s, armed with as many as 3 GE miniguns and 10 Browning AN/M2 machine guns fitted to fire from the left hand side of the plane, were dubbed Spooky and Puff the Magic Dragon due to their clouds of smoke when firing. The spookiest of these were great aircraft but still needed heavier armaments.

The Air force turned to the newly developed four-engine C-130 transport as the answer to the call for a larger gunship platform. The C-130 was modern and could carry nearly four times the load of the old Spooky. Several of the new transports were pulled from service, fitted with a myriad of armament, and sent to war. Over a four-year period, these aircraft provided close air support to troops on the ground and fought the War against the Trucks, killing some 10,000 NVA supply trucks along the Ho Chi Min trail. By 1972, North Vietnamese truck drivers were handcuffed to their vehicles to keep them from beating feet from their cargo at the first sign of an AC–130.

These heavily armed but unarmored aircraft fly low and close to the fighting to deliver ordnance on target. Of the 55 AC-130s that have been converted over the years, eight have been shot down. Nonetheless, every time the US has needed to use force for the past 40+ years, Specter gunships have been there.  You can even spot one in the new action film, Olympus has Fallen.

History of the First Lady

Lockheed C-130 USAF tail number 53129 was the first production Hercules aircraft to be accepted by the Air Force. Originally accepted in 1958, she flew transport and test missions for ten years before the war in Vietnam called for her conversion to a gunship. Converted in 1968 with her impressive 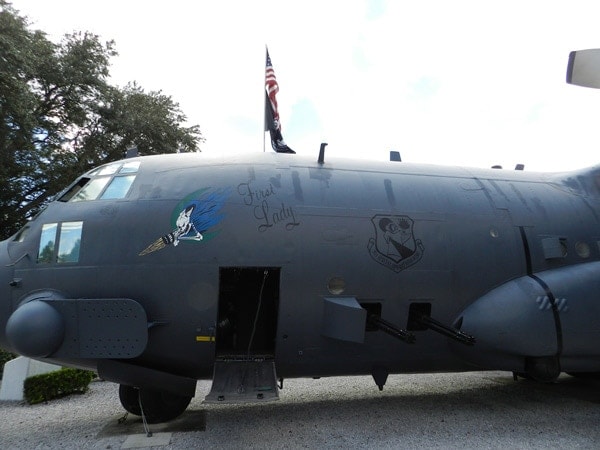 armament, the “First Lady“ was one of the first seven AC-130s to see combat. She flew hundreds of combat missions in South East Asia before returning home.

Still deadly at age 31, she put rounds on target in Panama in 1989 and flew over Haiti in 1994. In 1996 after 13,600 hours in the air around the world, she was gracefully retired and placed on static display at the USAF Armament Museum at Elgin AFB, Florida. Still officially property of the military, she has kept her teeth and Guns.com stopped by to look at them.

In her final configuration, the First Lady carried six guns of various sizes along the left hand side of the 97-foot long aircraft. When firing, the gunship would bank slowly into a left-hand pylon turn, with its left wingtip pointed to the ground. This gave the side of the plane a direct line of sight to the ground and targets below. Low-light TV, FLIR, ground-mapping radar, and other high-tech instrumentation allowed the targeting crew aboard the gunship to zero in on their prey below with pinpoint accuracy even in the dark of night. A crew of 14 flight officers, sensor operators, gunners, and illuminator operators were needed to fight the aircraft. 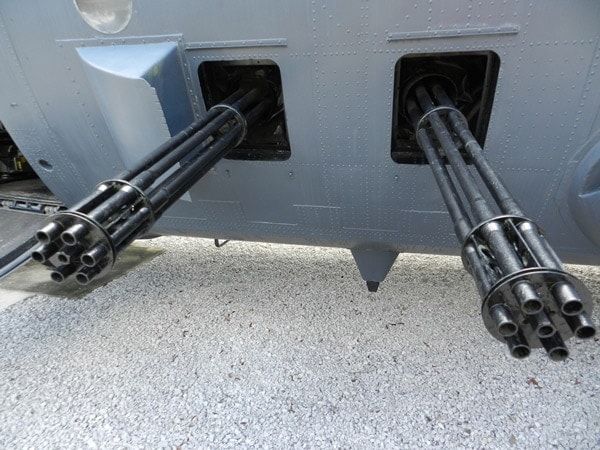 Starting at the front of the cavernous four-engine converted transport, directly behind the cockpit lies a pair of 20mm M-61 six-barreled cannon. These Gatling gun style heavies spit 20mm rounds the size of a Nathan’s jumbo frank out at 100 rounds per second. Behind the guns are cabinets the size of a walk-in closet that holds 3000 rounds of these vehicle-killers in 250-round belts. To clean up the mountains of brass and links left over after a mission, the crew fell back on an old reliable No.9 coal shovel and empty ammo cans.

Mini-guns in the center 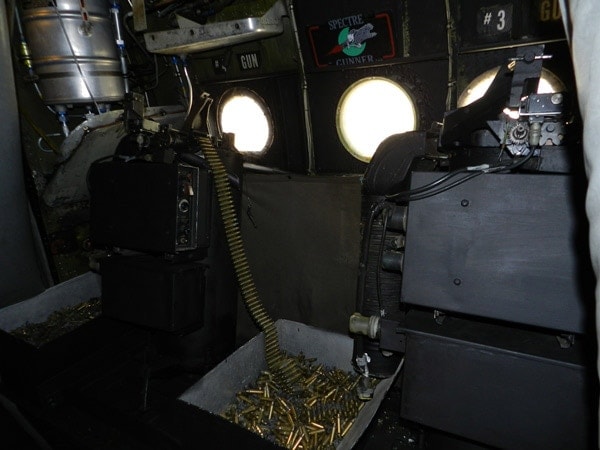 Just behind the 20mm Gatling guns are mounted a pair of 7.62x51mm NATO caliber GE GAU-2B cannon, almost tiny in comparison. Popularly known as mini-guns, these electrically controlled weapons were buzz saws, firing at upto 6000 rounds per minute. The First Lady and other gunships used these for anti-personnel missions and you can see why.

Heavy artillery in the rear 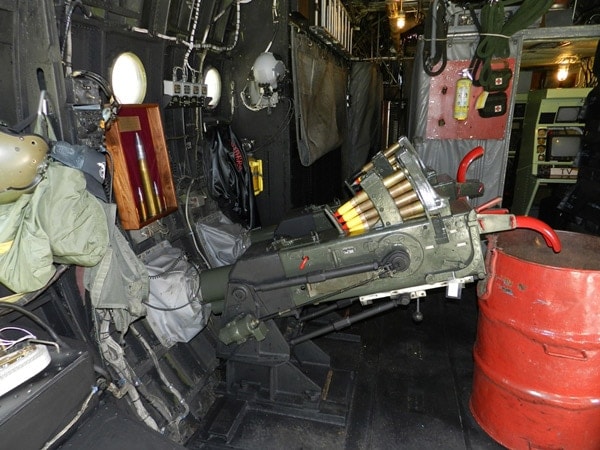 Added to the First Lady in 1971, a pair of 40mm Bofors cannon was installed just before the stern ramp of the aircraft. Dubbed project “Surprise Package,” these are the First Lady’s most powerful guns. These two cannon, weighing more than two tons per mount, were of the same type used by the Navy during World War 2 to shoot down planes—not to shoot down from a plane.

Capable of firing up to 100-rounds per minute if the gunners put the hustle to them, the Bofors fired a two-pound brass cased shell the size of a loaf of French bread capable of penetrating 50 mm of homogeneous armor plate. Across from the guns on the right hand side of the plane racks six feet high and fifteen feet long held as many as 480 of these rounds in four-shot clips. To collect the spent brass, two 55-gallon drums, painted bright red, were positioned under the ejection port of the Bofors. 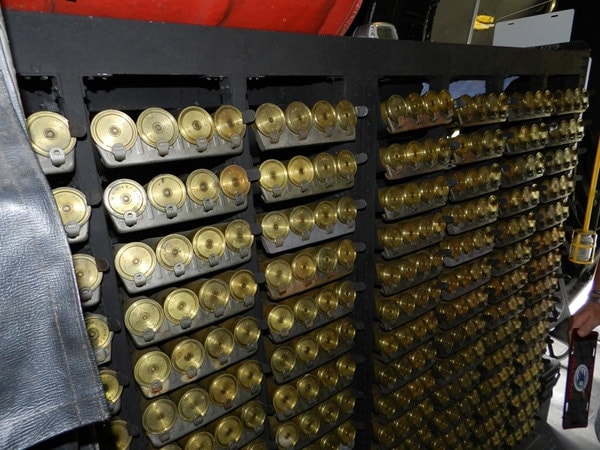 More modern versions of the AC-130 are armed with 25mm cannon in place of the older Vulcans of the First Lady and even carry a full-sized 105mm Army howitzer in place of the classic Bofors. With this much firepower in one place, it’s a good thing the Specters are on our side.