On Saturday night, Shawn T. Moore was out with a friend when he received a text message from his wife instructing him to come home because The Department of Youth and Family Services (now known as the Division of Child Protection and Permanency) was at his home demanding to come inside.

They weren’t alone. They were joined by four local police officers. The reason for the unannounced visit? 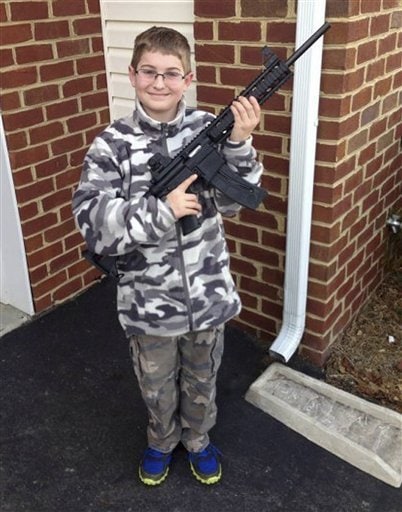 UPDATE: An anonymous source reported to police that Moore’s son, a child, has access to guns and ammo, Carneys Point Police Chief Robert DiGregorio told The Jersey Journal. However, the investigation has since been closed.

Apparently, in the Garden State, that’s grounds for a search of one’s private property because it may be evidence of “child abuse and neglect.”

“Someone called family services about the photo,” Evan Nappen, Moore’s attorney told Fox News. “It led to an incredible, heavy-handed raid on his house. They wanted to see his gun safe, his guns and search his house. They even threatened to take his kids.”

Did they have a search warrant?

Nope. As Moore related in his own words, “They kept trying to pressure me to open my safe. They had no warrant, no charges, nothing. I didn’t budge.”

Moore was smart. He had Nappen, the lawyer, on speakerphone during the entire confrontation. Nappen made things very clear for the officers and the child services agents.

“If you have a warrant, you’re coming in,” Nappen told the officers. “If you don’t, then you’re not. That’s what privacy is all about.”

After threatening to come back with a warrant, the officers and the child services agents left the premises. They never came back.

In the aftermath of the episode, Nappen revealed certain facts about his clients and their training/experience with firearms.

As for the justification of the raid, Nappen said it was way off base.

“New Jersey licenses kids to hunt with a shotgun at 10 years old,” Nappen said. “A minor son possessing a gun under the supervision of his dad is per se legal. This overreaction by government shows how schizophrenic the state is.”

Nevertheless, a spokesperson for the Dept. of Child and Families told Fox News that (a) they could not confirm or deny the investigation at the Moore’s residence and (b) they are required to follow-up on all complaints they receive.

“The department has a child abuse hotline for the state of New Jersey and anybody can make a call to that hotline,” spokeswoman Kristen Brown said. “We are required to follow up on every single allegation that comes into the central registry.”

In other words, they’re just doing their jobs.

“In general, our role is to investigate allegations of child abuse and neglect,” she added.

Here is Moore’s firsthand account of the raid, as posted on a Delaware Open Carry forum:

Last night I was out with a buddy of mine. I got a text from my wife that the cops and [Department of Youth and Family Services] are at the house and they wanna check out my guns and needed me to open my safe.

I’m instantly on my way. I get in contact with Evan Nappen on the way. I explain the situation. I walk in my house and hand the phone to the first cop I see. Then direct all of em outside. DYFS got a call because of a pic on my son holding a gun. They wanted to look around and check all my guns out, make sure they were all registered. Obviously that didn’t go well because I refused. I had Nappen on speaker phone the entire time so they had to deal with both of us. They kept trying to pressure me to open my safe. They had no warrant, no charges, nothing. I didn’t budge. I was told I was being “unreasonable” and that I was acting suspicious because I wouldn’t open my safe. Told me they were gonna get a search warrant. Told them go ahead. Nappen (my lawyer) asked me for the DYFS worker’s name. She wouldn’t give it. I asked for credentials and she wouldn’t show them. I tried to take a pic of her and she turned around real fast and walked away. After a while of them threatening to take my kids, get warrants and intimidation they left. Empty handed and seeing nothing.

People it can happen that fast. Most people wouldn’t have stood up to them like I did.

So, what are your thoughts?  Did child services go too far?  Or were they just ‘following protocol’?  Given the way they reacted (overreacted), what does this say about the future of gun rights in places like New Jersey (California, New York, Illinois, etc.)?

Lastly, put yourself in Moore’s shoes, how would you have responded to the demands?