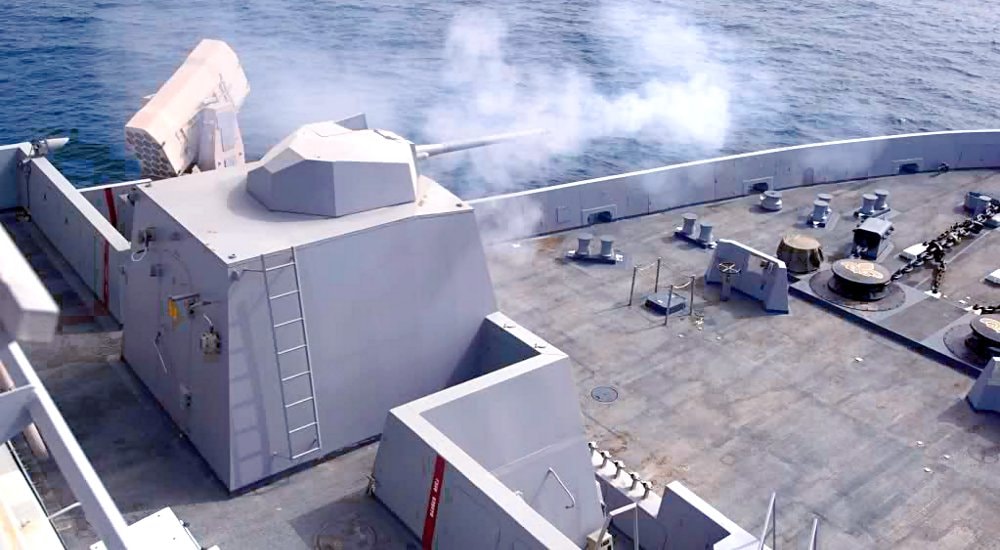 The U.S. Navy has awarded a contract to General Dynamics for a series of autocannon modules for their newest Littoral Combat Ships. These remotely-operated MK46 Mod 2 Gun Weapon Systems make up a core part of the offensive and defensive armaments of the modular littoral ships.

The MK46 Mod 2 module is built around a Mk44 Bushmaster II, a single-barrel dual-fed chain gun, a 30mm×173mm autocannon. Each module can store 400 rounds of ammunition and is fed by 240-round magazines. The most common types of 30mm ammunition are high explosive and armor-piercing. This is the same type of ammunition used by the GAU-8 Avenger, the main weapon of the A10 Warthog.

The way the module is configured the guns can fire at up to 200 rounds per minute. Over land the gun has an effective range just shy of two miles and up to three miles at sea.

A pair of these modules is on order for the Freedom-class USS Milwaukee and USS Detroit and the Independence-class USS Jackson. General Dynamics has until 2014 to complete the manufacture of the gun weapon systems.

These ships pack more than just the two MK46 Mod 2 modules. As kick-ass as they are, littoral ships are also equipped with one AGM-176 Griffin, a modified rocket-powered guided missile platform, a Bofors Mk 110 57 mm gun, one RIM-116 Rolling Airframe Missile system and four Ma Deuces because ‘merica. Depending on what the mission calls for, they can add to that.

In the wake of the 2013 budget sequester, many suggested that the Navy cancel the addition of new LCSes, citing their high cost and new, unconventional multi-purpose nature. This announcement would suggest otherwise, and that in the first five years of service, the LCS is a proven vessel platform.

The vessels have both flight decks and vehicle bays and can transport both land craft and helicopters just about anywhere in the world where the water’s about 13 feet deep, and can be configured to deploy submersible craft as well. Depending on mission requirements, they can deploy small forces of just about any configuration.

They can also extend communications and sensors much further in-land than any other naval vessel, relaying that information between soldiers on land and bigger ships at sea.

In addition to representing a new take on asymmetrical warfare, littoral combat ships’ flexibility may lead them to replacing many different specialized naval vessels, as they can be reconfigured to do reconnaissance, anti-submersible, anti-air, special ops, logistics, command and even mine-sweeping duties.

It’s clear that the Navy likes these small ships. We like them, too. But we like pretty much anything with autocannons.

Here’s are the details of the contract.

General Dynamics Land Systems Inc., Woodbridge, Va., is being awarded a $25,692,736 modification to previously awarded contract (N00024-10-C-5438) to exercise an option for the production of MK46 MOD 2 Gun Weapon Systems, including associated spares and shore based parts.  This option is for the production of two gun weapon systems for the LPD 17 class and six for Littoral Combat Ship (LCS) gun mission modules designated for the LCS 5 through LCS 7.  Work will be performed in Woodbridge, Va. (43 percent); Tallahassee, Fla. (20 percent); Lima, Ohio (14 percent); Westminster, Md. (11 percent); Sterling Heights, Mich. (10 percent); Scranton, Pa. (2 percent), and is expected to be completed by November 2014.  Funding in the amount of $25,692,736 will be obligated at time of award.  Contract funds will not expire at the end of the current fiscal year.  The Naval Sea Systems Command, Washington., D.C., is the contracting activity.