The Trick to Shooting Shotguns through Foliage

The shotgun: I cannot think of a firearm with more misinformed notions about what the gun’s effect will be in the home, in the field and on game. Novice shotgun shooters often start out with this mythical view of a shotgun blast, to them a force capable of sending an attacker flying across the room or bringing down game of nearly any size and regardless of its cover.

Wise shooters on the other hand know that the simplest foliage — a patch of broad oak leaves or a cluster of twigs — can defeat the mighty shotgun under the right circumstances.  Foliage and other obstacles are something all shotgun hunters, regardless of quarry, will have to work around when on the stalk and this can only be done through a combination of choosing the right equipment and taking the right shots. 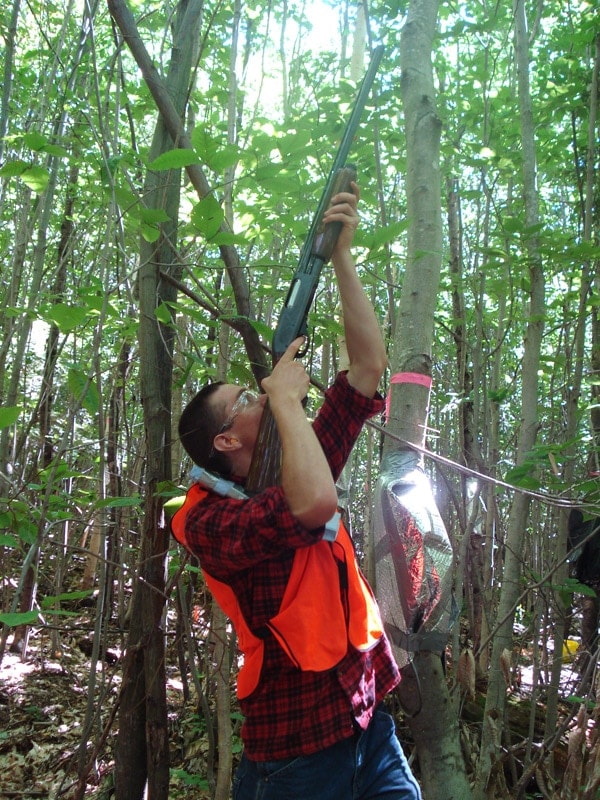 Squirrel hunting in a deciduous forest.

I believe your first consideration when buying any shotgun for hunting should be what type of game you will primarily hunt with it — a gun is a purpose built tool, so consider first the purpose of the gun. Truth is, in many types of hunting the potential for fail inducing foliage in the field is going to be pretty low.  For example, turkey hunters for the most part encounter game birds in an open field or forest, positioned at stands along shooting lanes like deer stand hunters. Foliage could be an issue here, but not really so much if you use bigger bore shotgun (14 gauge, 12 gauge, 10 gauge, slugs or even a rifle) and chose your shots like a pro.  Waterfowl hunters don’t have much to worry about either; you don’t see too many trees over open water.

No, it’s the upland bird and squirrel hunters who need to understand intimately that it does not take much in the way of green to defeat those little pellets.

I cannot fathom there is a grouse hunter on earth who hasn’t lost at least one (if not 50) birds because of shooting through foliage. 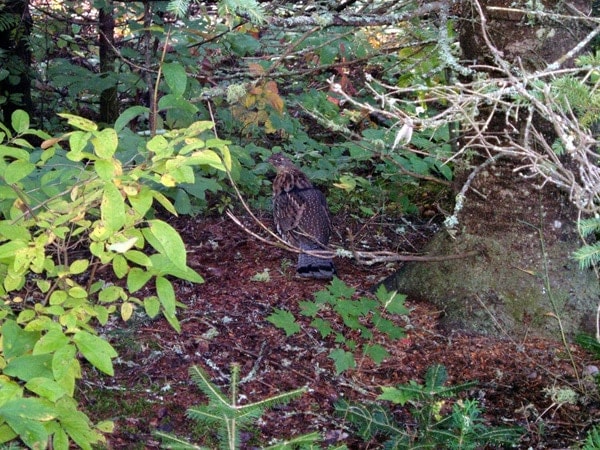 Ruffed grouse, ready to flee into brush. Roughed grouse on the ground are sometimes best distinguished by their shape rather than color.

When I first began grouse hunting I started with a Stevens 311, 20-gauge double barrel shotgun loaded with #7 ½ shot.  I found out quickly that if there was even a small amount of brush between the shot and the bird, a good bit of the pattern would not penetrate and was deflected off for parts unknown.  In the thick stuff that grouse love, this made taking shots at birds fleeing away from me difficult and honestly it was a crapshoot whether my pellets would find their way to any partially obscured targets.

The obvious fix, or so I thought, was to go to a larger shot size, so I shot with #6 shot for a time.  While the birds went down fairly quickly in the open, in even light foliage they may as well have been wearing Kevlar.

I thought about getting going with a more powerful gauge, but I like to eat what I shoot and feared going bigger would mean less meat. For a while I was stumped.

The solution, as counter intuitive as it may have seemed, actually turned out to be more shot, meaning a smaller pellet size.  After tinkering with different combos, I discovered that #8 shot in both 20-gauge and then later 16-gauge cuts through the leafy greens and brings down game birds the best, and my success rate went up dramatically.

Having hunted in the exact same places for many years in a row now with the same foliage, I believe this combo is more effective in the brush because there is simply more shot sent in the bird’s direction.  If it really is a bit of a crapshoot, then more shot increases your odds.

It took me many years of trial and error in the field to hammer out my load/gauge formula when it comes to taking birds and squirrels in brush, but you have to realize that my formula may not be yours.  I live in the northeast where foliage is thick, birds are tough and shots are usually tight.   Birds and forests out west, down south and up in Alaska are all going to have their own idiosyncrasies.

So how do you start figuring out what’s your best brush shotgun? Patterning a shotgun at the range is a fine start, but realize this is only really representative of shots on open targets.  What you really need is to be able to see what your pattern can and will do if brush is in the way.

Try this.  Pattern a shot on a target and then take a pine bough or something similar (we have pine trees to spare up here in the north) and place it in front of your target. Shoot it again and you will immediately see a difference in how many pellets are getting through to the target. Next examine the brush barrier and see how many pellets ended up stuck there or deflected away. Those are the pellets that are not going to get to that squirrel or bird.

If you want to see more shots on target, use a smaller size shot that gives you more pellets. More pellets mean a higher probability of bypassing brush.  However, if you have penetration issues then you might have gone too small. Just find the right balance.

A lesson in limitations

It isn’t just birdshot that can be deflected by a stray branch or brush. Many hunters especially in more developed areas use shotguns either by choice or mandate with slugs or buckshot for whitetail, myself included.

On one fall morning I was on watch when a nice six-point buck came strolling through, his mind clearly on something other than survival.  I hit him hard with a 16-gauge slug, but I didn’t realize it at the time because he remained standing.  When I shot again, I was startled to see a sapling topple over that was no more than an inch in diameter. The deer soon expired, but not because of the second shot; that big slug didn’t touched a hair on that deer. The one that did hit him, my first shot, went straight through and broke his offside shoulder.  With the comparison literally laid out for me to see, it was amazing to see how the little tree defeated that much lead.

Shotguns are perhaps the greatest tool we have for getting game, but like any tool you have to know the limitations it has. Despite its simple, point and shoot usability, it is not the wonder weapon many believe it to be and shooting shotguns can be a much more subtle operation than we give it credit for. You have to match the shot to the animal you are hunting, and the terrain you are going to be hunting in, so if you know you are going to be hunting in thick brush, plan accordingly.

Images: Summer on a shoestring