Since the 1950s, the most common accessory for the well-dressed businessman has been the briefcase. This innocent clamshell box with a handle is so frequently seen that it is hardly noticed and this very familiarity led German firearms innovator HK to design one with a heck of a surprise inside – an MP5.

In many situations, covert concealment of any select fire weapon is an operators’ (and civilians’) trump card and for business persons or VIPs in a high threat area or 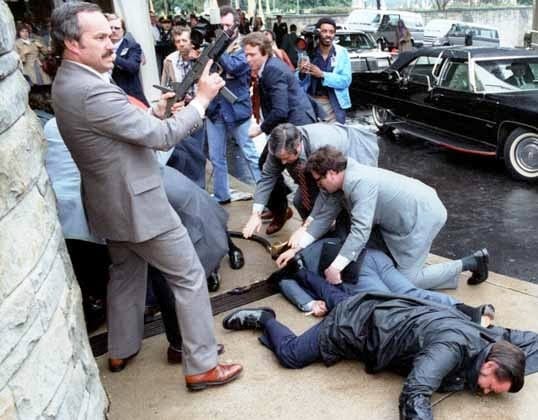 industry, employing a low-key protection specialist may be the best option for this.  Usually, these contractors dress in a manner similar to that of their client in order not to get made as an outsider in the group they are protecting, but there is also the issue of arming these guards discretely without telltale bulges or awkward equipment. Likewise, an otherwise unseen submachine gun capable of ripping out fifteen shots in a second without reaching for a weapon gives everybody peace of mind and this also went for covert operations in an urban environment, where having an instantly deployable weapon when none is readily visible can save lives and catch bad guys by surprise.

For these types of scenarios, the crafty engineers at Heckler and Koch came up with a special briefcase in the late 1970s. So special in fact that it’s designated, the Operational Briefcase.

Build to resemble a briefcase, HK fabricated a solid polymer and aluminum box with a thin plastic lid. Roughly 20x15x5-inches, it was the same general envelope as a technician’s toolbox or a businessperson’s briefcase. The fist that fits inside the glove of the briefcase is the HK MP5K submachine gun held in place by a STANAG claw mount. The ‘K’ is the shorty version of the classic MP5, weighs just 4.4-pounds, and is 12.8-inches long overall with a 4.5-inch barrel. It is much zippier than the standard MPs and has a cyclic rate of 900rpm. This meant it could drain a 15 or 30-round magazine in either one or two seconds respectively. 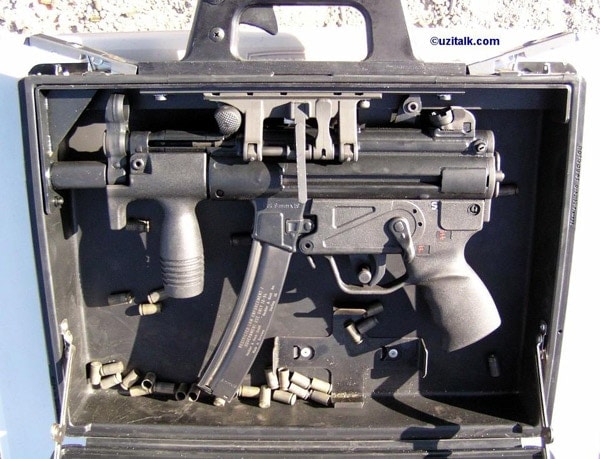 That was all well and good, but the truly neat thing about the MP5K was meant to be fired from inside the case without ever opening it. A linkage travels from a lever inside 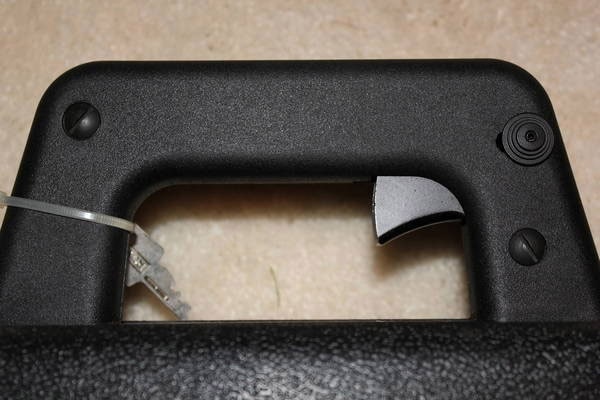 Close up of the trigger in the handle of HK operational briefcase.

the carrying handle of the briefcase that actuates the trigger on the submachine gun. The case was designed to hold the ejected shell cases, which would fall to the dead space at the bottom after being led that way by a shell deflector. A thin plastic plug in the side of the case opposite the muzzle was designed to be shot through and was replaceable. Of course, this small plastic plug also makes the briefcase readily distinguishable from the outside.

Aiming with the case accurately is impossible, but if the gun is being, used odds are it is at bad breath distances. In close-quarters combat, the weapons would be more than enough to react to a threat, lay down withering fire and either end the encounter or keep the bad guy’s head down long enough to break contact and retreat.

If you’re thinking this looks like the ultimate James bond toy, you’re right only this one is 100% real.

Almost as soon as it was introduced, HK distributors had a string of fast sales to dignitary protections groups and special operations forces around the world. While the 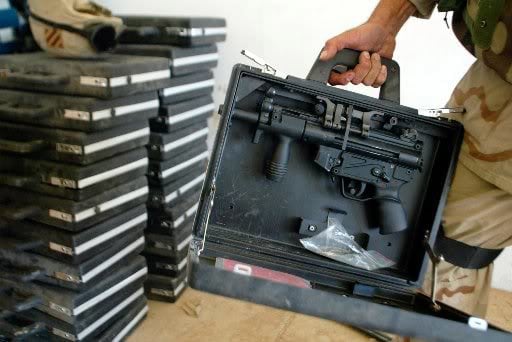 very nature of the gun case is that it remains undetected, they have been positively identified in the hands of GOE, SAS, CO19, SO14, and other special units.  Word is the Secret Service acquired a few back when Reagan was around but they haven’t advertised it. Hey, they are the Secret Service after all.

They have also filtered out into some other hands as well.  On April 14, 2003, U.S 7th Infantry Regiment Soldiers found 22 new in the box (excuse the pun) HK briefcase kits complete with MP5Ks installed in a Baghdad weapons cache. What old Saddam had planned for these or how many got away is anyone’s guess. Operational Briefcases have also turned up in Libyan and Syrian weapons caches during the recent revolutions there.

There were several similar cases made for the MAC10 (firing through a port in the luggage tag), UZI and others, but only the HK seems to have been factory made and sold by the same maker as the firearm designed to fit inside.

Downside of the HK Operational Briefcase

The Operational Briefcase was an interesting design, but not very effective. Besides being hard to aim, it’s easy to wrestle away in a CQC situation and once the magazine has been drained, it’s awkward to reload. 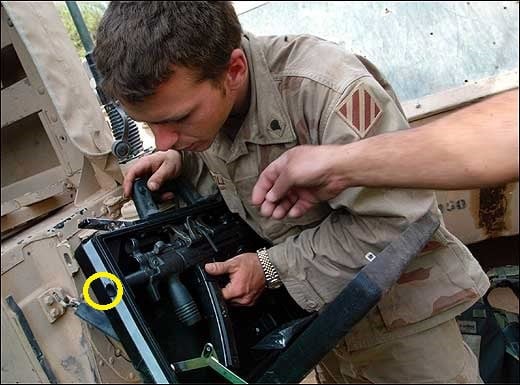 Even though seemingly common, the hard plastic case, with its distinctive gray aluminum side inlays, is actually quite easy to spot and stands out in a world of leather briefcases, particularly to someone educated in weaponry (or even just a nosy businessmen with an eye for luggage). It looks more like the sort of thing a copy machine repairman would carry his tools in, rather than a businessman’s briefcase and kind of how the fanny pack is over for CCW carriers, the Operational Briefcase is dead for exec protect guys.

The concept had been enthusiastically replaced by the HK PDW and super small machine pistols like the Glock 18 and Micro UZI. These guns are concealable, sightable and allow for fast draws and reloads.

Unless you know people who know people in Baghdad, or have a Class III dealer that owes you a kidney, getting the total package Operator Briefcase with a transferable MP5K is going to be expensive. Like about $25K expensive. 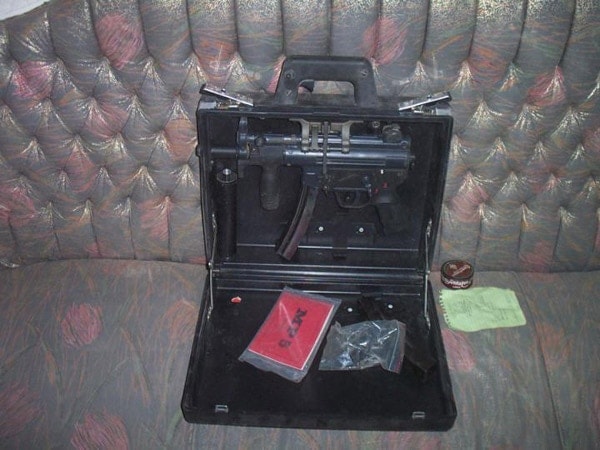 With that being said the (empty) briefcases themselves pop up pretty regularly at auction for about $1500ish. Be sure that they include all of the proper mounts, trigger in the handle, etc. before you buy it. Genuine HK-made Hofbauer GmbH MP5K/SP89 Operational Briefcases will have a plastic carrying handle held on with standard slotted screws. Also, look for German text written on the underside of the mounts inside the case. If you come across cases with aluminum handles or Phillips head screws, it’s probably some sort of knockoff. With the MP5K made under license in both Iran and Turkey, anything is possible.

The case is unregulated in its empty condition unless you happen to own an MP5 or an SP89 (semi-auto MP5 pistol) while you also have said case. In that situation, the gun inside (not the case) becomes an AOW and needs a tax stamp and registration under the NFA to be compliant. This is of course unless the weapon used with the case is already a registered AOW in and of itself. In that case, the briefcase is always just a briefcase.

Clear as mud? Just to be on the safe side be sure to call your local BATFE guy if you are packing your HK case with anything that goes bang to make sure you are legal.

Or else you could just carry your pencils and a sandwich in it. Your call.