For the past three centuries, the primary fighting weapon of the American soldier has been the firearm and we at Guns.com highly anticipate that, despite any advances in military technology, this trend will continue for many more years to come. Why? Because no matter what high-tech remotely piloted drones, battle droids, smart bombs, or cruise missiles there comes to be, there will always be the need at some point in a conflict for a trained and properly equipped foot solider to step into harm’s way and engage the enemy, man to man. In the spirit of this, let’s take a look at what the average soldier may be carrying in 2063.

As Guns.com has featured these past few weeks, if you examine the history of military firearms in fifty-year blocks, you will see a steady and remarkable progression in development and sophistication that is carefully, self-referential. 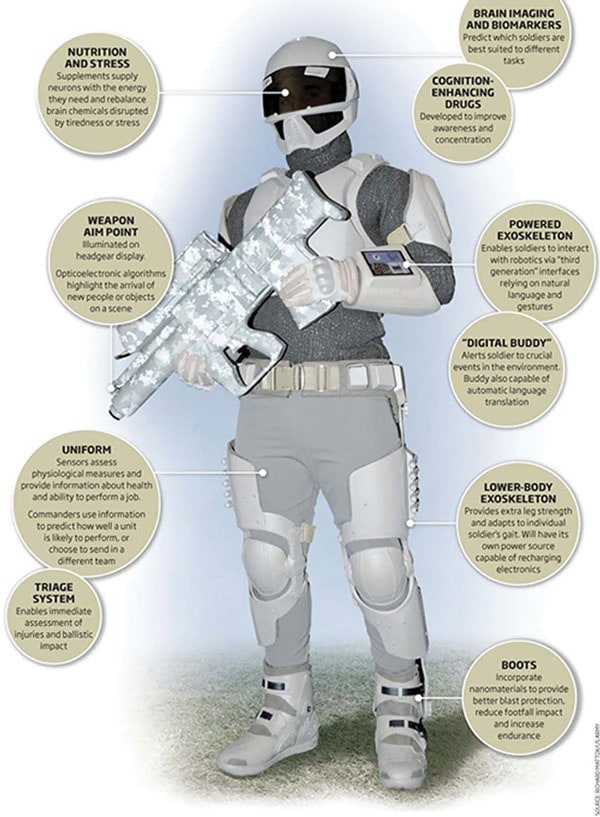 New ideas are often tried, found lacking, and then tested again, sometimes decades later, once the technology has matured to make them work. It was a series of these techniques that brought about the development of the M-55 rifle.

Produced by Strike Face Arms, a conglomerate of companies once assembled like the Freedom Group and then sold off in the Great Gun Scare of 2013, the M-55 was the winner of the 2050 US Army trials to replace the legendary M4A1 carbine and a series of 5.56mm rifles that augmented it in the 2020s.

To meet the Army’s guidelines for a select-fire gun capable of a variable cyclic rate, and weighing in at no more than 5-pounds loaded, the M-55 made extensive use of third generation  high impact polystyrene in the construction of both its upper and lower receiver group. Although some derided it as ‘a Styrofoam gun’, a series of extensive tests from the jungles of Guyana to the dusty Sahara proved its durability.

The IWI Tavor Bullpup is a good baseline for future bullpup carbine designs.

Once adopted, the US became one of the last large military powers to adopt a bull pup layout rifle, China, the UK, Israel, and Russia having long done so. An overall length of 24-inches with a 15-inch barrel meant that US soldiers finally had a truly compact firearm that fired a meaningful round.

Speaking of that round…

To accommodate a loaded fifty-round capacity magazine while both saving weight and allowing for controlled recoil on such a light rifle, the M-55 uses caseless ammunition. 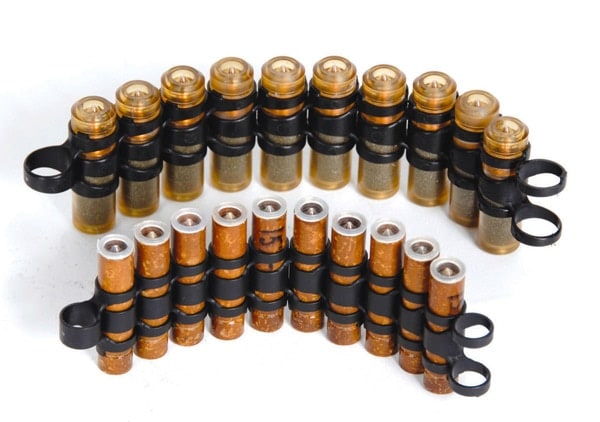 Using these eliminates the need for an ejection port and extractor and when firing, the entire round leaves the barrel as a unit with virtually no felt recoil. With no heavy brass cases to lug around, the weight of a loaded 50-round cassette of 6.5mm EF Caseless comes in at just 9-ounces. This is half as much as the M4A1’s loaded 30 round magazine that it replaced.

Each springless cassette is issued fully loaded and sealed in thick plastic from the factory with a half-life of 40 years before it needs to be evaluated. A simple geared wheel, much like the cassette players of the late 20th century, feeds the rounds into the chamber. A lithium-metal polymer battery (LiPoly) the size of a pencil eraser provides electric ignition of the caseless rounds. The battery life is 5000 rounds at which time the entire rifle is turned in and rebuilt. The soldier in the field does no maintenance as the on-board computer constantly analyzes firing performance and orders a replacement carbine from depot to be delivered by express package service when the rifle is within 10% of its expected service life. 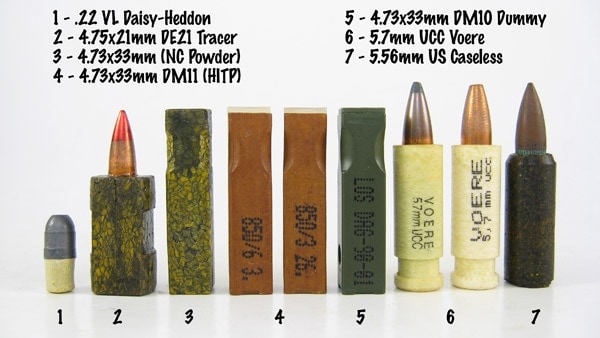 Some caseless ammo is already in existence.

Taking a step back in firearms history, the caliber choice for the caseless ammunition was the 6.5mm (0.264 caliber) bullet weighing some 130-grains. This was roughly the same bullet fired by the 1950s British ordnance board that was recommended for NATO but turned down in favor of the 7.62x51mm. Whereas the two most popular rounds of the early 20th century—the 5.56mm NATO and the Russian 5.45mm—would penetrate 30-40 centimeters in gelatin, 130-grain 6.5mm EF Caseless rockets out at 3000 fps penetrates nearly 100-centemeters of gelatin at 100 yards and 3-inch timbers at 2000 yards.

Optics of the future

The Integrated Modular Sighting Unit (IMSU) developed separately by the Gesellschaft consortium (formed from the merger of the former Trijicon-Eotech and Kahles-Nikon groups in 2040) gave the M-55 the ultimate optics choice. By installing a 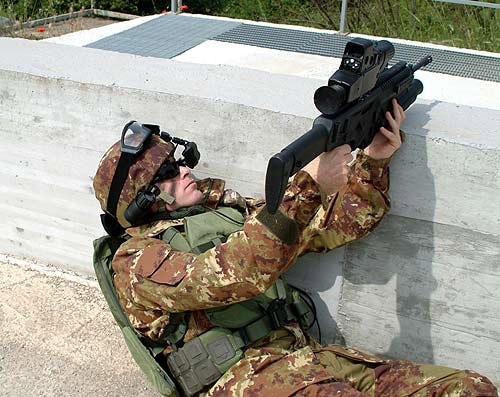 one-piece unit with an advanced sensor package, this standard issue glass eliminates both traditional lenses and mirrors. The size of a domino and mounted on the front MIL-STD-2040 rail, the device features passive night vision, heat sensing FLIR, or cavity searching magnetic resonance sonaric imagery (depending on software version) to view a target of interest.

Powered by an onboard solar cell and transmitting in real time to both the soldiers visor heads up display and to command elements back in the Pentagon, the target can be instantly evaluated by an Army Judge Advocate General’s Corps panel who can release the weapon’s remote safety, allowing the soldier on the ground to take the shot. Provided the rules of engagement are fully met, of course. The IMSU also, of course, sends a streaming video to the U.S. Army Heritage and Education Center, at Carlisle Barracks, PA where it is stored perpetually  for future use by military archivists and historians, often popping up on the tablets across the world in weeks through FOIA requests.

The M-55, due to its size envelope and functionality, replaced not only the M4A1, but 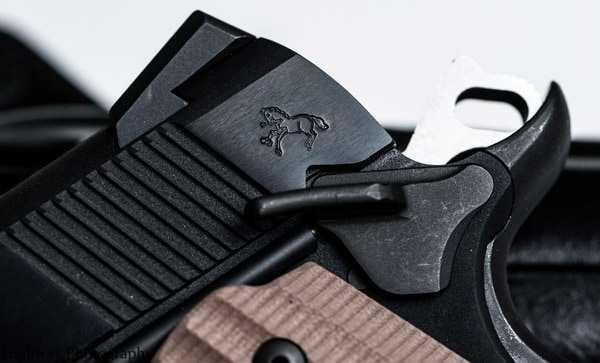 also the Army’s Beretta pistols and the few remaining M249 SAWs still in service. While the Marines adopted the M-55 as well (in a digital splinter camo finish with a snorkel/periscope attachment for firing submerged), they have retained their M1911A1 .45ACP pistols as secondary weapons.

When interviewed about this curious phenomenon, Sergeant Major of the Marine Corps Hubert Joy simply said, “We probably won’t replace the .45 until they make a .46.”

When they do, Guns.com will be here to bring you the story.