What Does it take to Shoot with an Occluded Sight Picture?

Ever go to line up a target with your red dot or reflex optic only to find a blur of water, smudges or the dust cover? In tactical circles, this is what is called an occluded sight picture and if you don’t know how to handle it, it can mean curtains so check out some surprising details about what it takes to shoot an AR-15 or other rifle accurately with something else in your sight picture.

What Causes an occluded sight picture?

An occluded sight picture is an obstructed sight picture. To occlude means to stop or block a passageway. As it’s related to shooting, consider the pathway, tunnel or tube of a red dot or reflex optic or a rifle scope being blocked in the front (the muzzle end). The shooter can see the red dot, for instance, but the target is blacked out –at least from the dominant eye.

The most common reason an occluded sight picture? A flip up dust cover in the way. If a shooter hasn’t prepped his or her optic before hand, the time it takes to remove an obstructing dust cover could mean the difference between winning and losing a gunfight, which is the nice way of saying living or dying.  But it’s also something that can happen regardless of your best laid plans so whether it’s a broken dust cover spring that doesn’t allow the cover to flip open or mud, sweat, rain, blood splatter or a partially shattered optic, in the heat of battle, you should know how to shoot without immediately fixing this problem.

If a shooter has both the front and the rear portion of the optic covered, the most tactical option is to always remove the dust cover nearest the shooter’s eye first. Shooting without seeing any sights can save your life, but it should be avoided at all costs and removing the rear cover will at least give you a nice red dot to reference.

Aimpoint also makes see-through dust covers that can be purchased separately or with their Patrol Rifle Optic (PRO). After getting my eyes and hands on some from Streicher’s, I found them to everything I envisioned the perfect dust cover to be (no pun intended).

In keeping with this, if you want to purchase only one dust cover, buy the one closest to your eye. Also, a word of caution here: I’ve purchased Aimpoint dust covers from another vendor and I found some vendors (or perhaps Aimpoint themselves) sometimes refers to the “rear” dust cover as the one closest to the muzzle end, and the “front” closest to the eye. Though not totally out of left field, this seems a bit counter intuitive to me, so it’s a good idea to double check with the supplier on which is which before purchasing.

Regardless if your optics is a EOtech, Trijicon or some other brand, the portion of the scope nearest the shooter should remain covered and the lens clean. If it’s raining and your muzzle is down (and it should be), you don’t want your optic to get wet or otherwise dirty on the part you need to look through to line up your sights.

Shooting with an Occlusion

Thankfully shooting with an occlusion in your sight picture can be done with consistent accuracy by using the non-dominant eye. With both eyes open, the full obstruction that can’t be seen alone with the dominant eye can be viewed, making for an only partially-obstructed sight picture.

Ever try holding up an empty cardboard paper towel roll and while looking through it with one eye, hold the palm of your hand in front of the eye outside the cardboard tube? If it’s done right, it will look like there’s a hole in the palm of your hand. That’s the same idea behind the occluded sight picture. Keep both eyes open, aim and shoot.

But what kind of difference does it make to shooting accurately? 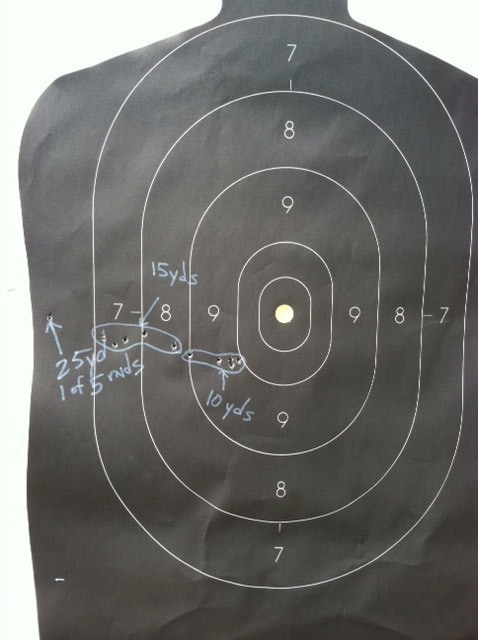 I decided to run a test.  Taking a 16-inch AR, with an Aimpoint optic with no occlusion, 10 shots with good ammo were fired easily within 2 MOA at 25 yards (point of aim/point of impact). In other words, the gun and optic were dead on.

From the prone position, with sand bags for a rest, and no time constraints, five shots were fired at a B-27 human silhouette-sized target.  With the aim-small, hit-small principle, I placed a bright one-inch dot sticker on the “X” in order to line the sights up as best as I could. This time, the front dust cover was closed, presenting an occlusion.  Lining the sights up with both eyes open, I took my time and gently squeezed off five rounds. To my surprise, at 25 yards only one round out of five even hit the target.

The same test was conducted at 15 yards and 10 yards, respectively, all in the prone 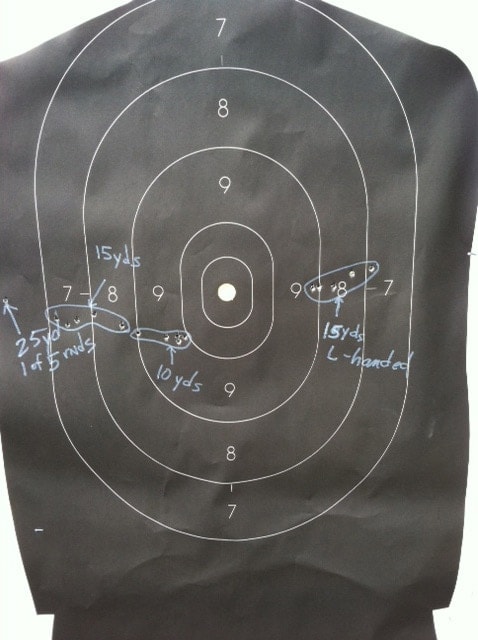 position and taking slow aimed fire. Again, the shots went left. Depending on the distance to the target, there was a significant, varying degree.

Naturally, for testing purposes the decision to shoot rapidly needed to occur.  Shots were fired one at a time from 15 and 25 yards while standing with an occluded sight 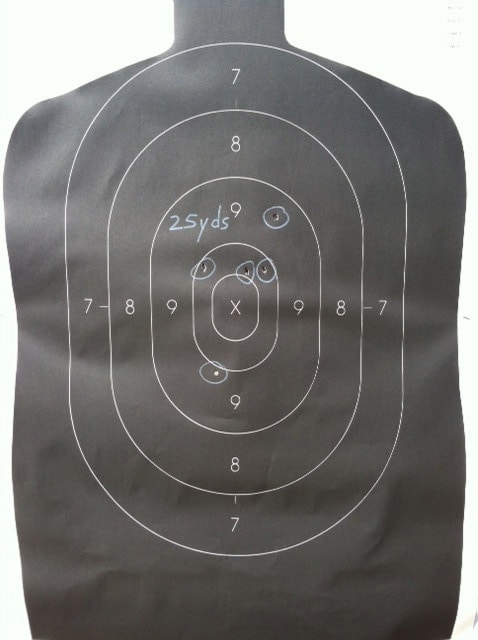 picture on my dominant eye. These were “up” drills; before each shot the gun was in the low ready position and brought up rapidly to get a rapid sight picture/sight alignment. Starting from the low ready, each shot was made between one and a half and two seconds.

The results were a stark difference from the first test and truly surprising. Where as I was all over the place with the ‘well-aimed,’ slow fired shots, rapid target acquisition with an occluded sight picture greatly increased my point shooting accuracy.

If a shooter needs to take a rapid shot at a close distance (10-25 yards) with an occluded sight picture, the results should be good-to-go, to borrow some military jargon.  It’s a technique that should be practiced but practice is easy: just aim and shoot quickly and more than likely you’ll get a good enough hit.

By contrast, if a shooter needs to take a precision shot at a target at a distance of 25 yards or less with an occluded sight picture, I believe it’s likely going to be a miss. Right handed rifle shooters will tend to shoot left of the target and left handed  shooters will shoot right of the target. Extrapolate this to a greater distance (e.g. 75-200 yards or more) and your shots will be off by a very long ways. The tactical lesson here is to fix the occlusion before shooting longer distances, which makes sense because with a threat at a distance, you have more time to react than if a threat is up close and you need to act and shoot fast.