A North Carolina couple faces a slew of charges in connection to an apparent road rage incident that resulted in a fight and ended with gunfire over the weekend and we wanted to share it with you, because we think it brings up some compelling talking points about what constitutes a deadly defense encounter. 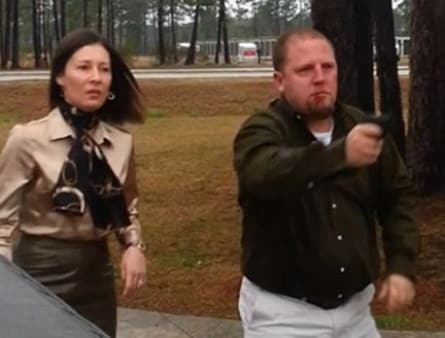 The couple charged in the incident is Bradley Turner, 40, and his wife Christy Turner, 30, of La Grange, North Carolina, the Carteret County Sheriff’s office told the Sun Journal.

What they did, according to Guns.com, is a textbook example of what is NOT a self-defense situation.

The Turners, with their toddler, were driving down Institute Road in Newport, North Carolina, Sunday afternoon. At some point during the drive a young man chauffeuring his buddies pulled in front of them or, from the Turners’ point-of-view, cut them off. Either way, the Turners apparently saw it as an abrasive maneuver and as too many motorists today seem to think, felt the need to punish the perpetrators.

The Turners followed the vehicle to a neighborhood and parked behind it. If you watch the video, which was caught on a passenger’s cell phone camera, you’ll see Bradley Turner aggressively approach the young driver. He curses at him and accuses him of poor driving but ultimately punches him. In response, the young driver and his buddy fight back until they knock Bradley Turner to the ground. At which point they walk away.

What happens next raised the Turners’ behavior to a possible felony level and serves as a serious reminder of the dangers that can occur when emotions (like the kind you might feel after getting cut off on the road and beat up) are permitted to trump sensibility.

Christy Turner stepped out and handed her husband a loaded handgun, who then pointed it at the young driver. The young driver and his friend run away (as they should because a pissed off dude has a gun). While walking toward the young men, Bradley Turner trains the gun on one of the two men (he reportedly fired one shot in the video, but it’s difficult to tell), stops and retreats to his SUV. That’s where the video ends.

According to the Sheriff’s department, Bradley Turner later opened fire on the young men, hitting the back of their truck and a house in the neighborhood before driving off.

Armed only with bullet holes and cell phone video, the young men contacted the authorities. The Carteret County Sheriff’s office leaked the video to the press in hopes of identifying the couple and in less than 24 hours the Turners turned themselves in.

Ladies and gentleman, we as a society need to move past this road rage bullshit. It’s petty, selfish and almost a guaranteed trip to the pokey if you introduce a gun into such a scenario (though if one of the teens had held their attacker back at gun point, we would say different). Then again, that wouldn’t really be road rage.

Turner looks like a vindictive creep in this video because it’s clear he was thinking more about teaching these punk teens a lesson than protecting his family which is to say, he was thinking more about his own ego than worried for his safety. We get it, a lifetime of atrocious drivers, long lines and rude attitudes means people have become hyper sensitive to any perceived flip experienced on the highway. But the only thing that is going to change in this equation is you, so take a moment and listen to these pearls of wisdom. Back off from aggressive drivers and try to avoid being an aggressive driver yourself. That’s an awfully familiar credo.