Back in 1887 John Moses Browning, the Da Vinci of small arms development, was doing some work for Winchester. At the time, that company was primarily known for lever action rifles but, they wanted to break into the shotgun market and approached Browning to design one.  He was allowed to use any action he wanted—as long as it was lever.

Why a lever anyway?

Though today the name Winchester is synonymous with any numbers of firearms and ammunition, in the 1880s the company known as Winchester Repeating Arms was known for pretty much one thing, lever action rifles—of which, they made some of the finest. Oliver Winchester, the company’s founder, was originally a clothing merchant and understood the value of innovative, consumer friendly designs and quality products; when it came to the business of selling guns, he was the money and the brains behind the operation and this meant fostering talented weaponmakers.

The designs of the companies products, including the famous ‘Gun that won the West’, the 1873 Winchester, had all come from the earlier works of gun visionaries Horace Smith (of Smith and Wesson fame) and Benjamin Henry (known for the Henry Rifle).  Both of these men worked for Winchester before striking out on their own. Likewise, in 1886, a 33-year old Browning designed an improved lever action rifle that would replace the weaker toggle-link of Winchester’s old guns with a stronger locking-block action.  Eventually this mechanism would be incorporated into the Model 94 design, but we are getting ahead of ourselves.

For a time, Winchester had wanted his company’s gun library grow and diversify and offering shotguns seemed to be the next logical step. Being the company behind the ‘Gun that won the West’, he also wanted it to be as similar as possible to the Winnies that had made the company famous, despite protests from Browning who believed a slide or pump action would be better for a repeating shotgun.

With ‘lemons out of lemonade attitude’, Browning set to work on his newest creation. 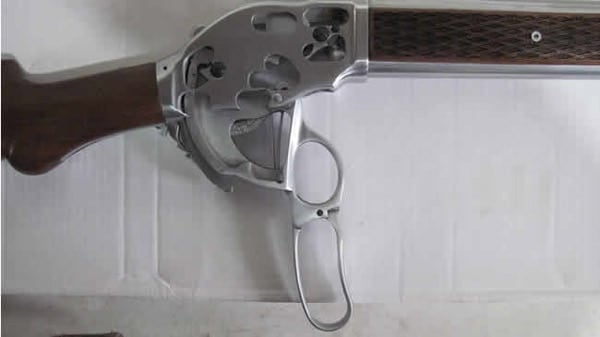 Exposed lever action mechanism on a Winchester 1887 shotgun. The inner workings are similar though hardly identical to those found in Winchester 1871 rifles though share a common lineage with the later Winchester 94

Paying homage to Christopher Miner Spencer, Browning used a five shot tubular magazine that rode under the barrel to facilitate loading. This was similar to the one used on Spencer’s Model 1882 shotgun, the first pump scattergun in production. The bridge between the lever-action loading and ejection system was a breech-loading, rolling block action similar to the one that was used in the Remington rifles of the 1860s. To cycle the rounds, the user simply worked the lever and the spent hull would be ejected while a fresh one was picked from the magazine and fed into the fixed chamber.

The result was an 8-pound scattergun offered in either a 20-inch or 30-inch barrel giving the firearm an overall length of 40-50 inches. Since the design was marketed in 1887, it was offered as the Model (of) 1887. It was tendered in either 10 or 12-gauge calibers.  The only sight was a small front bead—standard for a shotgun as much then as it is now.

As the young and virtually unknown Browning was a Winchester employee at the time, the design became licensed exclusively to the company for a single fee payment.

in 1901. These early guns were made for black-powder paper hulled shells and by the turn of the century were seen as obsolete, replaced by the newfangled smokeless powder shells. Browning beefed up the design and released the Model 1901 that year, though chambered only in 10-gauge.

It seems that Browning succeeded in talking the Winchester execs into a pump action a few years before, the M1897, and the company did not want the old design to steal any lifeblood away from their new 12-gauge baby. It’s one of the few examples of gunmakers realizing the effects of market cannibalization before it was too late. 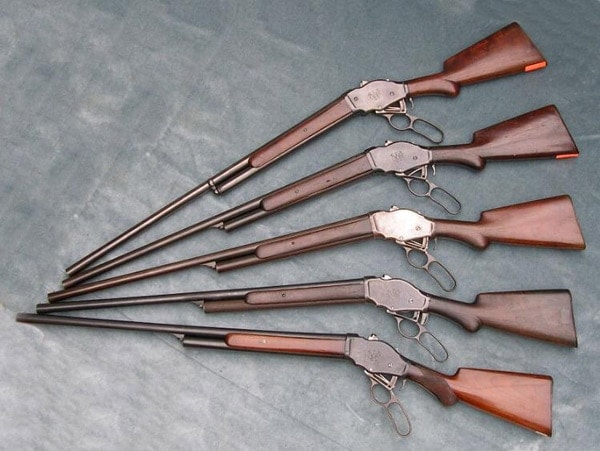 These later models were however offered in many more barrel versions that included different cylinderbore chokes, 32-inch barrels for those long-range waterfowlers, and so forth.  Even with these improvements, just over 14,000 of the 10-gauge only Model 1901 lever shotguns were made by 1920 when the design was finally put to bed.

It seemed Browning was right about people just not wanting a lever action shotgun.

For about sixty years the lever action shotgun was as dead as disco. Then in the late 1980s those lovers of all patents, copyrights, and trademarks China North Industries 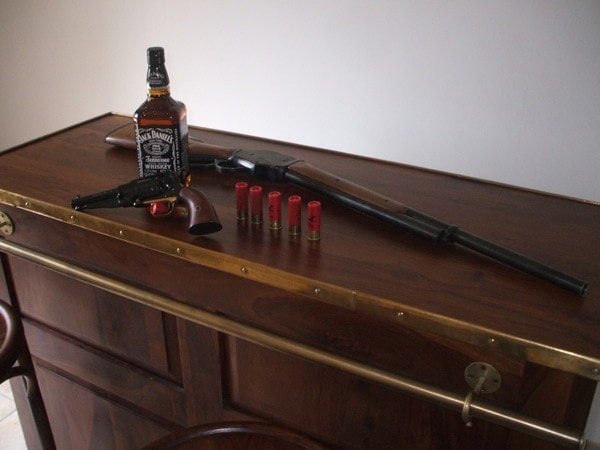 Norinco 1887 hanging out with some friends.

Corporation, better known as Norinco, started to make a near identical production Model 1887 shotgun. Made capable of shooting modern 12-gauge rounds, these Chinese made guns can do something the original Winchesters never could. They were marketed under the IAC name and used a 20-inch barrel chambering 2.75-inch shells for about $400. Original Norincos are hit and miss in the quality department. Don’t ever mistake these guns as actual 1887/1901s. If you see a ‘china’ mark anywhere, I can almost guarantee it’s not a real Winchester. However, these guns are often very fun shooters—something you can’t really say about the real thing.

Coyote Cap Gunworks reworked some of these IAC guns here in the States to improve function reliability.  If you can find one for a good price, they are worth it. 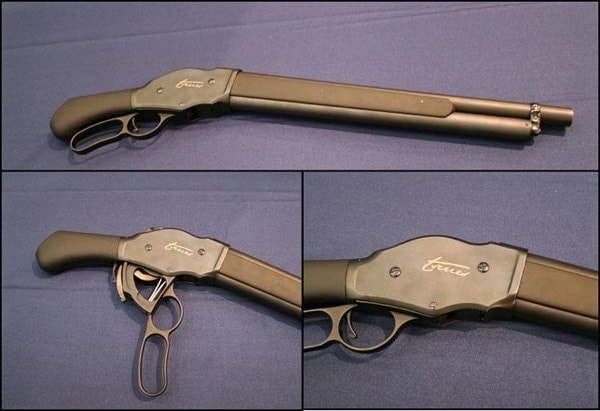 Italian schlock masters Chiappa Firearms has also jumped on this bandwagon by making a 7.9-pound, 27.5-inch overall chopped down shotgun they bill as the 1887 T-Series. With an 18.5-inch barrel, no buttstock, rubber coated pistol grip, and questionable applicability, this gun seems inspired more by the movies than actual shooting applications (Guns.com suggests you watch your wrists/fingers when firing). Nevertheless, it is a close reproduction of the Winchester 1887 other than the above exceptions. Moreover, at a MSRP of one grand, who isn’t lining up to get one?

With less than 80,000 total Winchester lever action shotguns ever made, they are not extremely common today making them about as collectable as any “classic” shotgun and perhaps even more so due to their association with the Old West. They came into play just as the last of the old outlaws were being run to ground and the stagecoach companies were being replaced. Since they were a slow-seller in the 1920s, these sturdy old guns were good cheap weapons for small sheriff’s offices, county constables, railway police, and others. This has ensured that a good amount of these guns lived quiet lives in gunracks, for those ‘just in case’ situations. 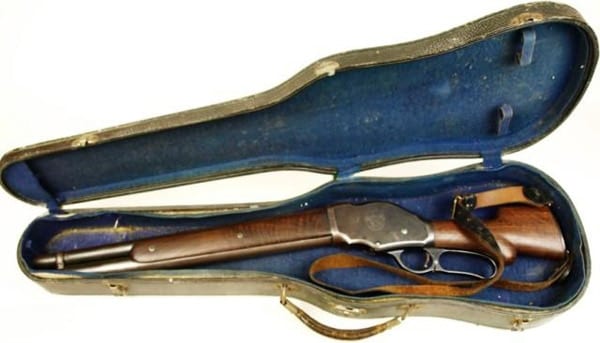 These guns have also been wildly popular on the big screen, showing up everywhere from classic westerns like The Professionals and the Life and Times of Judge Roy Bean, the new Sherlock Holmes movies with stops in flicks like the Mummy Returns, Terminator 2 and Ghost Rider. This has kept them, or at least modern clones of them, high on the list of coveted, ‘too cool for school’ gun designs. 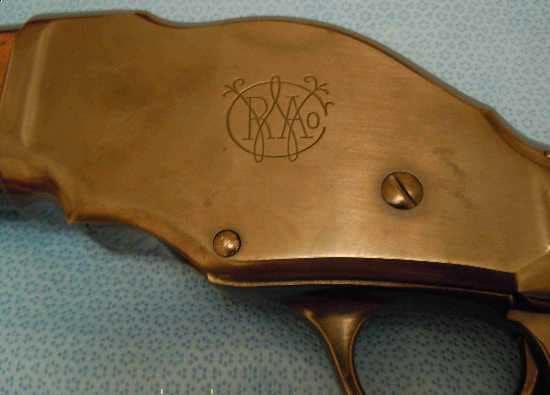 Rich Winchester markings appear on the left side of 1901 models.

judging from a sampling of archived online gun auctions. Some very nicely preserved models can often bring prices as much as $4000 at auction, so always be on the lookout. Most 1887s will be pre-1898 antiques and the others will be C&R eligible. They are easily distinguished not only by their markings but also by their serial numbers, as blackpowder 1887-models run before serial number 64,855 and the more modern 10-gauge 1901s start there and move up. The 1901 models used an updated patent number issued that year, so if you don’t see Aug 20, 1901 patent date on your Winchester, then odds are you have an 1887.

Remember that the older guns should never be fired with anything other than downloaded cowboy action style blackpowder loads. Even the more modern examples of these Winchesters should only be fired after a thorough examination by a competent gunsmith and then only with low-brass loads to preserve their collectability.

Still, I think Winchester should have listened to Browning back in 1886.