Is the mainstream media biased against gun owners?  You bet it is.

Are gun owners aware of this fact?  Yes.  Do we care?  I suspect most of us don’t.  At this point, it’s pretty much expected.

With that said, we do get irked from time to time at the media’s portrayal of gun owners, which frequently hews to the narrative that we’re all a bunch of paranoid zealots, blood-thirsty and pernicious, who horde supplies and hideout in subterranean bunkers awaiting a zombie apocalypse.

Naw, that might be overstating it.  It’s probably more accurate to say that the media propagates or reinforces some version of President Obama’s notorious depiction of Middle America when talking about gun owners:

“It’s not surprising, then, they get bitter, they cling to guns or religion or antipathy to people who aren’t like them or anti-immigrant sentiment or anti-trade sentiment as a way to explain their frustrations.”  – President Obama, 2008.

The implication one often sees in various media outlets is that there’s an unhealthy bond between gun owners and their firearms, that we’re flawed or have some type of character defect for believing that individuals are personally responsible for their safety, that the Constitution protects the right of the people to keep and bear arms, that guns — when placed in the right hands — can save lives.

Below are seven examples that show media bias against gun owners.

Note: I don’t know if they’re the ‘top seven’ per se, but they’re pretty flagrant examples.  Moreover, some are examples of media personalities and journalists who, arguably, go too far with their editorial treatment of gun owners.

Also, I’m sure I’m forgetting some instances of media bias against gun owners, so if you have anything to add, please share it below in the comment section.

Piers Morgan is pro-gun control.  We get that.

But I think many people believe he crossed the line when said to Larry Pratt, the Executive Director of Gun Owners of America, “You’re unbelievably stupid man, aren’t you?” during an interview on CNN’s Piers Morgan Tonight, while the two were debating the merits of gun control and crime rates in the U.S. and abroad.

Morgan, who at times claims to have some semblance of a journalistic pedigree, certainly showed his true colors during the exchange.

On a side note, one could argue that Morgan’s continuous unfair treatment of gun owners is part of the reason he’s dead last in the cable news ratings.

New Yorker contributor Adam Gopnik is a great writer and essayist.  There’s no doubt about that.  His prose is elegant and clear and he makes writing look easy.  I really enjoy(ed) reading his work.  But, I lost a lot of respect for the man when he said, in a New Yorker article, “The people who fight and lobby and legislate to make guns regularly available are complicit in the murder of those children.”

For someone so smart and so expressive to say something so inane was troubling.  It underscores the fact that the debate over gun control isn’t grounded in common sense and reason, but rather, it’s rooted in ideology, an irrational fear of firearms and agenda-driven politics.  Facts don’t matter to gun control advocates.

Gopnik doubled down on his specious accusations a week later:

As I wrote last week, those who oppose it have made a moral choice: that they would rather have gun massacres of children continue rather than surrender whatever idea of freedom or pleasure they find wrapped up in owning guns or seeing guns owned — just as the faith healers would rather watch the children die than accept the reality of scientific medicine.

Those who fight against gun control, actively or passively, with a shrug of helplessness, are dooming more kids to horrible deaths and more parents to unspeakable grief just as surely as are those who fight against pediatric medicine or childhood vaccination. It’s really, and inarguably, just as simple as that.

In Gopnik’s view, gun owners are tantamount to child killers.  How does this go unchecked and unchallenged by New Yorker editors?

When renowned playwright and Pulitzer-Prize winning author David Mamet wrote a powerful essay defending the Second Amendment, the mainstream media universally chided him, dismissing his rather insightful observations and resorted to cheap insults.  Some examples:

“Sure David Mamet is incredibly ignorant,” said Geoff Berg of the Houston Chronicle, “but what a hero he is for condemning government racism that doesn’t exist.”

And Michael Tomasky of the The Daily Beast called it a “bizarre rant,” and concluded, that “It’s basically kind of boring; another rich white man yelping about his taxes and so on.”

However, I don’t find anything “bizarre” or “ignorant” about the central conclusion in Mamet’s piece:

The individual is not only best qualified to provide his own personal defense, he is the only one qualified to do so: and his right to do so is guaranteed by the Constitution.

President Obama seems to understand the Constitution as a “set of suggestions.” I cannot endorse his performance in office, but he wins my respect for taking those steps he deems necessary to ensure the safety of his family. Why would he want to prohibit me from doing the same?

Also, it’s worth reporting that the majority of The Daily Beast readers felt the same way: 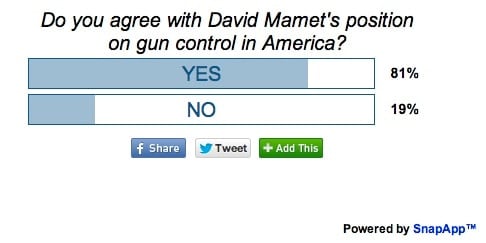 I’ll leave this to the experts at the Media Research Center, who track media reporting on an aggregate scale.

According to a study they conducted, in the wake of the Newtown tragedy, the three major networks (ABC, CBS, NBC) skewed their coverage in favor of President Obama’s push for tougher gun laws, airing pro-gun control stories at an alarming rate when compared with pro-gun stories.

■ Stories advocating more gun control outnumbered stories opposing gun control by 99 to 12, or a ratio of 8 to 1.

■ Anti-gun soundbites were aired almost twice as frequently than pro-gun ones (228 to 134). 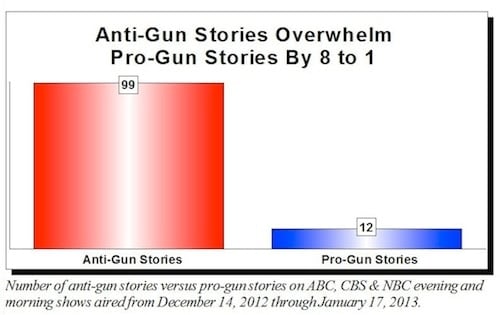 Media Reporting in the Wake of Newtown (Photo credit: MRC)

When Neil Heslin, the father of a slain Sandy Hook student, testified before a gun violence task force in the Connecticut legislature, he asked the audience during his testimony “why anybody in this room needs to have one of these assault-style weapons or military weapons or high-capacity clips.”

At first, no one in the crowd replied. Heslin followed up by asking the question one more time, appearing to solicit a response, “Not one person can answer that question,” which prompted a member of the audience to say, “The right to bear arms shall not be infringed.”

The distraught father then said, “We’re all entitled to our own opinion, and I respect their opinions and their thoughts.”

Again, the professionals at the Media Research Center did a wonderful job pointing out MSNBC’s biased reporting:

After receiving a bunch of flak for the edited video, MSNBC did not apologize, but had guest-host Ari Melber, who was sitting in for Martin Bashir, say the following:

On Monday on our program, we aired a portion of a hearing where we heard from Neil Heslin, whose 6-year-old son Jesse was killed at Sandy Hook Elementary School. We have received a number of comments over the past two days, so we are going to play the relevant portion of that testimony in full.

6.  What exactly is an ‘assault’ weapon?

Here are some questions to ponder: How many journalists and media pundits who cover the gun control debate actually know what an ‘assault’ weapon is?  How many know the difference between a fully auto and a semiautomatic firearm?  How many know what a pistol grip is or a telescoping stock or a barrel shroud?

Judging by the coverage, not that many.

In January we saw a great example of traditional media outlets struggling to answer those questions. The Chicago Tribune attempted to define for its readership what an ‘assault’ weapon was and in the process made at least one big error, i.e. they mistakenly labeled an AR sling loop as a “Mount for a bayonet, grenade launcher.”

To their credit, once the error was brought to their attention they corrected it and issued the following apology:

Guns are a sensitive topic, especially now, and a graphic we ran on Page 18 of the Friday, Jan. 18, paper failed to account properly for that sensitivity.

That’s the thing about errors — making an obvious one, as we did here, automatically raises questions about our credibility.

First, we made a blatant and inexcusable labeling error. In an attempt to explain what makes a gun an “assault weapon,” we mistakenly labeled the gun’s sling attachment as a mount for a bayonet or grenade launcher. We apologize for the error and have published a correction.

As all gun owners know, these mistakes happen all too often.  And not everyone is as forthright and as honest as The Chicago Tribune when they make a mistake.  Sure, while these errors are not always deliberate, they do have an effect on the non-gun owning public.  That is, they confuse the hell out of people, which of course doesn’t bode well for gun rights.

If you ask me, it’s a valid question: Why does the media always side with gun control advocates and how they choose to label firearms?

7. Anti-Semitism is the reason why gun owners dislike Bloomberg

Well, all that’s true if you believe MSNBC contributors Mike Barnicle and Al Sharpton, who discussed the matter on MSNBC’s Morning Joe the other day.

“Let’s get down to it, Mike Bloomberg, mayor of New York City, there’s a level of anti-Semitism in this thing directed towards Bloomberg,” Barnicle argued.

“No doubt about that,” Sharpton added.  “If he was not a big-city Jewish man and was from another ethnic group, in some parts, I think it would be different.”

As I said above, this list is incomplete.  I know I’m overlooking or forgetting something, so please chime in with your recommendations below.

I’d like to add an honorable mention, which irks me and the rest of the Guns.com team.  That is, the lazy journalistic standards of websites like Media Matters.  What they do is pirate our content and then neglect to provide a link back to the original Guns.com article so that the reader can easily reference the source material.  In essence, it makes it more difficult for the readers to engage with opposing perspectives.

No, it’s not a huge deal.  But we extend that courtesy to all media outlets, even our competitors and what some may even describe as our adversaries.  We may be pro-gun (we are Guns.com after all), but we firmly believe that you should listen to all sides and voices and come to your own conclusions about the issues.  In the end, censorship benefits no one.