The ATF served a federal search warrant at the Georgia home of the popular Youtuber FPSRussia with the intention of finding explosives on Tuesday. Investigators suspect Kyle Myers, the host of the show, might be violating federal law with what he does, to the delight of many, with explosives on Youtube. 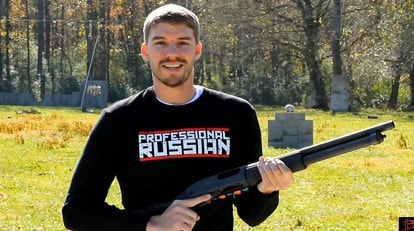 The ATF raided the Georgia home of Kyle Myers, aka FPSRussia, on Tuesday.

Federal agents, accompanied by the Georgia Bureau of Investigation and deputies with surrounding counties, searched Myers’ home along with his father’s 60-acre farm, where the show is filmed, in Carnesville. However, Kitty Wandel, the producer of the show, said that it was just her at the house at the time of the raid since Myers was out of town.

“Both Keith [Ratliff] and Kyle were sticklers for obeying the laws and would not knowingly break any. It is very common for people to use Tannerite in media both on TV and on YouTube.”

“If it ever came to doing something outside of our legal boundaries, we would then work with someone who was legally authorized to do it in an approved location,” she said about handling guns, explosives and equipment.

Under ATF regulations it is illegal to manufacture, sell, distribute, transport or even own explosives without a federal explosives license.  However, in the FPSRussia videos Myers uses Tannerite, an explosive civilians can buy, own and use without a license.

Tannerite is legal because it’s labeled as a binary compound, meaning a pre-packaged product consisting of two separate components.  This does not fit the ATF’s definition of “Explosives.”

When Guns.com talked to the ATF about this incident the ATF spokesman Richard Coes said he didn’t know why ATF agents suspected Myers of wrongdoing.  However, he told local media that “the claim is that he was using explosives and getting paid for it via YouTube.”

Wandel expanded on that concept saying, “It’s difficult for people to understand how [Myers] makes a living off of a monetized Youtube channel.”

Myers is 26 years old and lives a financially comfortable life by making videos where he shoots guns and blows stuff up, or, more to the point, does stuff people want to see. The FPSRussia channel is just shy of 4 million subscribers and half a billion views.

While Wandel wouldn’t say how successful the channel is, she did explain that “it’s not as much as our fans believe, some fans think it’s around a million [dollars], but it’s nowhere near that. It’s enough to make the videos and live comfortably.”

This raid comes almost three months after Myers’ business partner Keith Ratliff was found dead by a gunshot wound to the head inside his home/workshop. The two started what would be a type of firearms company called FPS Industries, but since Ratliff died the venture has fallen through.

Wandel explained that the office Ratliff was found in, was going to be a part of a new Youtube series that would focus on what happens behind the scenes of FPSRussia.

Whether or not the raid had anything to do with Ratiliff’s death is still up in the air. Wandel said no, Coes with the ATF didn’t know, but local authorities said the searches were in connection to Ratliff’s death but wouldn’t delve any deeper. Guns.com contacted both the Franklin County Sheriff’s Department and the Hart County Sheriff’s Department, but neither offered new information.

Although no arrests were made, Coes said that the warrant is usually the beginning of an investigation.

Wandel said that she and Myers are in shock about all this, but are trying to help with authorities the best they can. “I offered them the accounts over a month ago,” she said due to the lack of understanding of how Youtube paid it’s directors like FPSRussia.

“We can only hope this helps [the ATF] understand how we make our money, so it doesn’t hurt another Youtuber,” she said. “We really want to protect all the other Youtubers who [shoot guns and use Tannerite]. That would be horrible if something happened. These are the loudest, most vocal people for the gun community, I’d hate for them to be muted.”