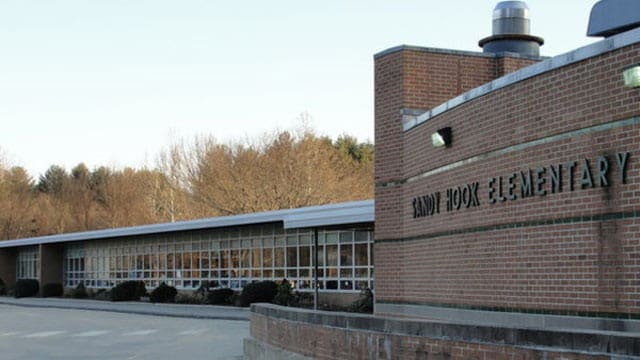 A Connecticut court released new details on the Sandy Hook shooting yesterday including items gathered during searches of the gunman’s home after a 90-day hold on the information expired.

In a lengthy, carefully worded statement, Stephen J. Sedensky III, the State’s Attorney for the Judicial District of Danbury, revealed a handful of details about what Adam Lanza did before and during the shooting that left a total of 27 people dead including 20 children and seven adults.

Information was not immediately given to the public due to the sensitive nature of the case and the ages of the victims, but since the incident sparked a state and national debate on gun control, authorities thought it was prudent to reveal what they could while still respecting the families of the victims and without jeopardizing the ongoing investigation.

“The investigators and myself are aware of the work some members of the public, the Governor and the General Assembly are trying to do,” Sedensky said. “It is with that work in mind and our obligations to the investigation … [that] some facts of the case are described and only limited redactions to the search warrants and returns were requested.”

“After consultation with the investigators, it was decided that much of the information in the search warrants would not sought to be sealed and that the release of the … basic crime scene information would not jeopardize the active and continuing criminal investigation into this unprecedented tragedy.”

According to the statement, on the morning of Dec. 14, 20-year-old Lanza shot his mother Nancy Lanza, 52, at point-blank range in the forehead with a .22-caliber rifle while she was lying in her bed in the master bedroom on the second floor of their home. When police found her they also found a rifle on the floor near the bed. 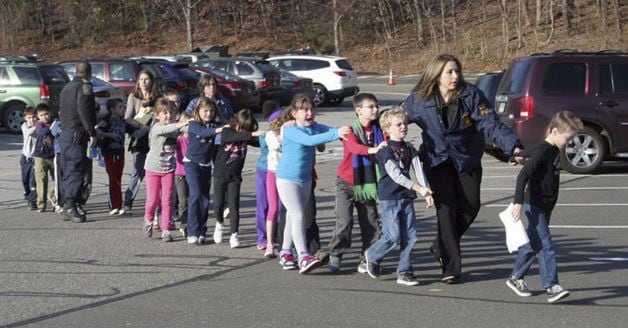 Later that morning, Adam Lanza loaded his mother’s car, a 2010 Honda Civic, with several firearms and drove over to Sandy Hook Elementary School around 9 o’clock, parked in a fire lane in front of the school, got out and started shooting his way through the building with a Bushmaster .223-caliber rifle loaded with a 30-round magazine.

When police arrived on the scene they discovered the murdered children, teachers and school personnel in the first two classrooms off the main hallway of the school, adjacent to the front entrance. And they found Lanza lying dead in the middle of a classroom wearing military style clothing.

On the scene, investigators discovered that Lanza had equipped himself with a Glock 10mm pistol, which is what he used to kill himself, a SIG P226 chambered in 9mm, three magazines for the handguns, and a total of six extra 30-round mags for the Bushmaster. As investigators inventoried his gear they found that the AR magazines contained 0, 0, 0, 10, 11 and 13 live rounds, and recovered 154 spent .223 casings from the scene. Inserted in the Bushmaster was a magazine containing 14 live rounds and one in the chamber.

When police searched Lanza’s vehicle they discovered a loaded 12-gauge Saiga shotgun with two magazines containing, according to authorities, a total of “70 rounds of Winchester 12 gauge” in the passenger “compartment.” After discovering the shotgun police put it in the trunk.

Investigators estimated that from the time Lanza entered the school to when he killed himself lasted around five minutes.

While details of the scene begin to paint a more vivid image of what happened on that dark day in December, five search warrants that were granted to police for the initial investigation dated Dec. 14, 15 and 16 were also released yesterday. 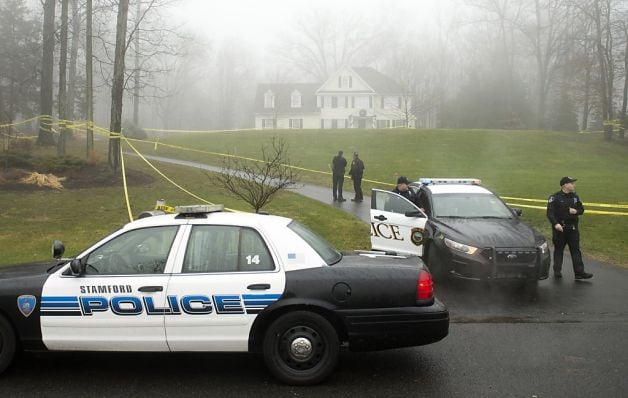 In the documents, investigators list items seized from inside the Lanza home, a two-story, pale yellow colonial style house with dark green shutters and a two-car garage. The items listed give a glimpse of what went on inside the Lanza home, something that family friends have said they kept private. Investigators say the documents help piece together who the shooter and his mother were and possible motivations for violence.

According to the documents, the FBI interviewed people who knew the family (the interviewees’ names were redacted) and they described Adam Lanza as “a shut in and an avid gamer who plays Call of Duty, amongst other games.” The person added that Lanza “had attended Sandy Hook Elementary School and that the school was [his] ‘life.'”

Another person told the FBI that Lanza “rarely leaves his home” and considers him to be a “shut in” as well.

Inside Adam Lanza’s room, police found a smashed computer hard drive and miscellaneous computer accessories, video game consoles including an Xbox and a Playstation 2, as well as several “personal items” and the gun safe.

Inside the gun safe investigators found lots of ammunition including 12 gauge shotgun shells and .22, .40, .45, .223 and 5.56, and .303 rounds. In addition to the ammo they found gun holsters and similar accessories, tools, a knife and a bolt-action Enfield rifle. 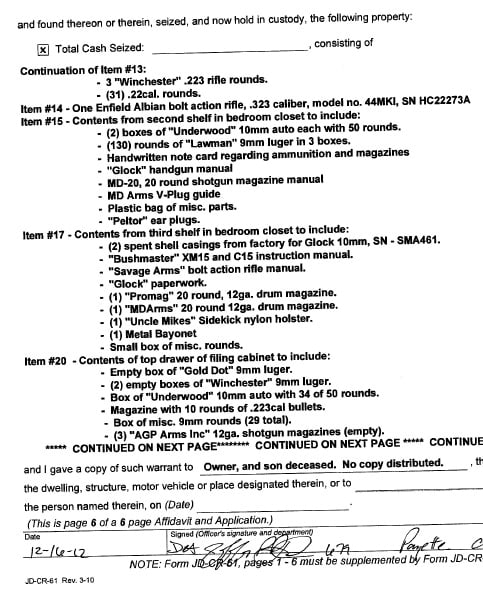 A snapshot of the search warrant granted by a Connecticut judge Dec. 14, 2012.

In the bedroom closet investigators found more ammo, a gun and gun accessories. Police found stored in the three drawers inside the closet: .22, 9mm, 10mm, .223 rounds and 12 gauge shotgun shells, but with several 20-round shotgun magazines. They also found paperwork and instruction manuals for most of the guns his mother owned.

Sitting in the closet was a Savage Mark II .22-caliber rifle loaded with a magazine containing three rounds, cardboard targets, several items stained with a blood like substance, empty shell casings, and another magazine. There was also a shoebox, a duffle bag and a small tan bag.

Lastly, they found nine knives, three samurai swords, a 6 foot 10-inch pole with a blade on one end and spear on the other, a Volcanic .22-caliber revolver, and a BB-gun.

Scattered around the house police listed other items they consider pertinent to the investigation. Items seized include: 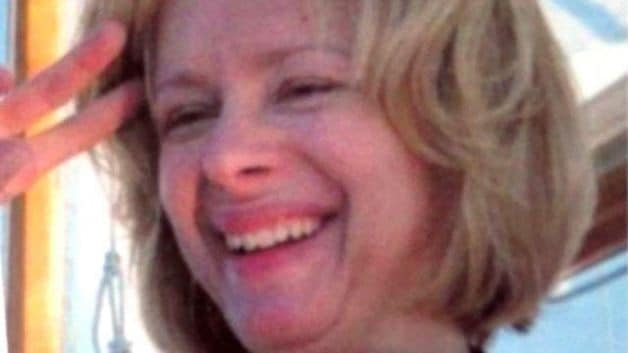 Nancy Lanza in an undated photograph.

While the items listed above are interesting — inventory items from inside anyone’s house and it would certainly pique most folks’ interests — and give insight to what Nancy and Adam Lanza took interest in, it isn’t unusual for avid, recreational shooters to stockpile such a large quantity of ammo, magazines and guns. Recent interviews of Nancy Lanza’s friends revealed that she and her son bonded by target shooting together, but they said that she also had a difficult time connecting with him in other ways. Who exactly they were and what they wanted to do is still developing and with time journalists and investigators will reveal both their lives in and out.

These newly revealed details are only part of the story, but the part that the authorities believe to be enough for state and national lawmakers to intelligently continue the heated gun control debate and ultimately make informed, reasoned decisions when shaping future gun laws.

As for the investigation, it is still active and ongoing.

“No conclusions have been reached and no final determinations have been made. The estimation of completion in the summer remains,” Sedensky said. “After the investigation is complete, I will prepare a report regarding the matter which will include an evaluation of the crimes committed and whether or not there will be any prosecutions as a result.”