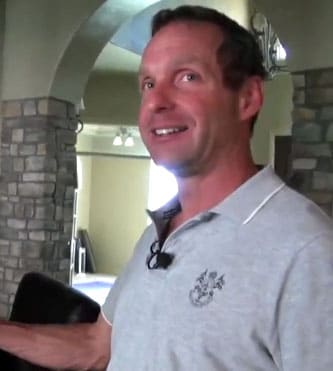 “I’m in bed sleeping, I get up, I retrieve my sidearm, I chase him out the front door. I’ve got him pinned on the ground. It’s 4:55 in the morning and I don’t have a stitch of clothing on.  I’m basically telling him at this point, ‘Stay on the ground, don’t move, because if you do move, I will shoot you.’”

When the times comes to protect your house, you do what you got to do.  This is what happend to Eric Martin, a Utah homeowner who woke up to an intruder in his house this past Thursday.  The suspect, Clinton Keller, had made his way through various rooms in the home before being noticed.  As his girlfriend called 911 and his 8 year old son lay asleep, Martin who was naked only holding his sidearm chased the burglar out on to his front lawn.  The suspect ended up tripping over his duffle bag, where Martin held him at gunpoint until police arrived.

The police lauded Eric Martin for his actions in handeling the situation.  The suspect Clinton Keller was booked on residential burglary and theft.

“Imagine five police cars and seven officers rolling up to a scene with a naked man holding a weapon pointing at someone, and holding him down on the ground,” Martin said. “The police got a kick out of that.”