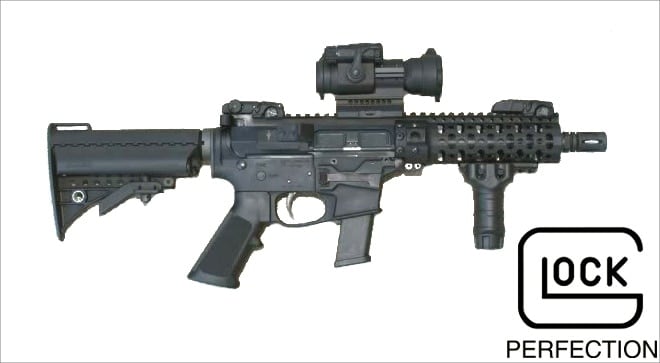 After years and years of consumer, law enforcement and military demands, Glock will soon unveil their newest type of firearm, pistol-caliber carbines that accept ubiquitous Glock magazines. Glock plans to officially launch the new Glocks at this year’s NRA Expo.

Glock will be launching three versions of their carbine at first, chambered for their small-frame magazines in 9mm, .40 S&W and .357 SIG (.45 GAP has not been mentioned). They will be tailored for both law enforcement and consumer segments, with an SBR, an AR-pistol type gun and a standard carbine with a 16-inch barrel. Both the pistol and SBR Glocks will have 6.5-inch barrels.

Glock told us they are  considering a model with a permanently-attached muzzle shroud, similar to the TacSol SB-X barrel, which will accept any standard silencer inside while still measuring in at 16 inches. This will give you the option of running a compact Glock carbine suppressed without requiring that you register the lower as an SBR.

A second line of Glock carbines for their large-frame magazines chambered in .45 ACP and 10mm Auto is due later, most likely in 2014.

These Carbines accept standard AR triggers and most other AR-15/M16/M4 accessories, like stocks, pistol grips and furniture. It isn’t clear at this point whether or not Glock will sell caliber conversion uppers separately, but we hope so, that would be a smart, not to mention profitable, move.

Glock will be using a straight-blowback operation for these guns, making the bolts and bolt carriers compatible with existing pistol-caliber AR parts. They’re not breaking any molds other then their own.

This shortly follows the announcement of the SIG MPX which has taken everyone by storm. While the design is simpler, the fact that it uses standard Glock magazines — and has the Glock pedigree for durability, reliability and excellence — we’re positive that these carbines will be universally popular.

Actual details and availability will be finalized at the NRA Expo, but we expect to see the first batch of these hit the American market by the fourth quarter of this year. It’ll be a tough wait; it’s been years since people have first asked Glock to make this gun or any Glock magazine-accepting pistol-caliber carbine. A few more months will be worth it.

The one major question is price. Glock has been totally silent on this subject, but says they’ll be “affordable” and “in-line” with common service rifles.