O, How the Masses Love Glorious Helical Magazines for Defense of Motherland

In the past month, the “fearless and supreme leader” Kim Jong-un of North Korea, marshal of the Korean People’s Army (and voted sexiest man alive by The Korean Worker magazine two years in a row), was been photographed in public with his loyal and most trusted bodyguards—and they had some interesting hardware. Seen escorting the people’s joy, two camouflaged soldiers armed seemed to be armed with standard 5.45×39mm AK74 rifles. What was non-standard about said AKs however were the huge (loaf of bread) sized helical magazines attached in place of the common banana clip.

Were they real? Where did they come from? What are they? Do they work? Keep reading.

In the past century, submachine guns and assault rifles have most commonly have 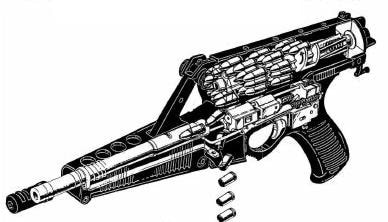 used detachable box magazines. While box mags are nice and easy to use, they typically can only hold 30-40-rounds of ammunition before they become too unwieldy. Some early designs, such as the Thompson, Finnish Lahti, and Soviet PPSH, experimented with large, finicky drum magazines, but this was considered by many to be an evolutionary dead end and never proved as effective as the box mags in the field.

In the early 1980s, two west coast gentlemen, Michael Miller and Warren Stockton, worked out the design of a magazine that stacked the rounds in a spiral, much like the double helix of a DNA strand. The tube-shaped magazine placed the rounds lengthwise in a series of spirals parallel to the axis of the body of the tube and drove the whole thing, like any other magazine, with a spring.

Born into the bosom of the Cold war, this was the first helical magazine. 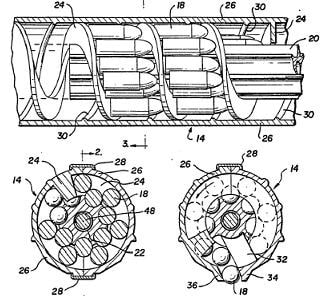 It gave an immense increase in capacity, while streamlining the magazine to the gun. This device was used as the centerpiece of the Calico Light Weapons Systems from 1985 to present. The company, in its various forms, offered 50 and 100 round helical magazines for their unique guns in 9mm, and 22LR.

Since then the helical magazine has been often imitated, but never duplicated—in the US. Overseas however, in Communist countries where patents are taken less seriously, it’s a different story…

With the Calico turning heads, Izhmash, the same people that brought the world the AK47 and the SVD sniper rifle began working on a submachine gun that used a helical magazine. Speaking of the AK and the SVD, the sons of the inventors of those two guns, Kalashnikov and Dragunov, collaborated on this new design and with a lineage like that to live up to, you can imagine that hopes in the Kremlin for this new burp gun were high.

The Bizon in all it’s glory.

Legacy aside, the overall effect of their product, the PP-19 Bizon (Buffalo), seems to have lived up to their expectations and it was even patented in the US in 2003 by Izhmash.  These guns are increasingly becoming standard kit for Russian grunts and have been used frequently in Russia’s recent troubles in Chechnya, Dagestan, and other points Central Asian. 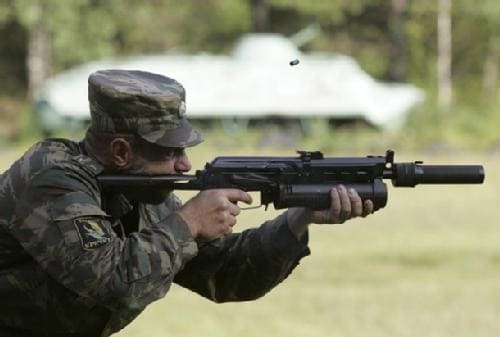 Put into production in 1996, this 4.6-pound, 16.7-inch long room broom is available in all of your popular subgun calibers. Using a shortened AKS-74 receiver as a starting point, it has almost no recoil. Firing from a closed-bolt and using many AK design features (go figure), it has a nice, steady 700-round per minute rate of fire. Going one better than Calico, the gun uses a 64-round helical tube mag that fits a hinge-like assembly under the barrel rather than above the action like on the American gun. Thus, those who don’t know any better often mistake the Bizon for a mini-AK with a grenade launcher attachment.

But now you know. 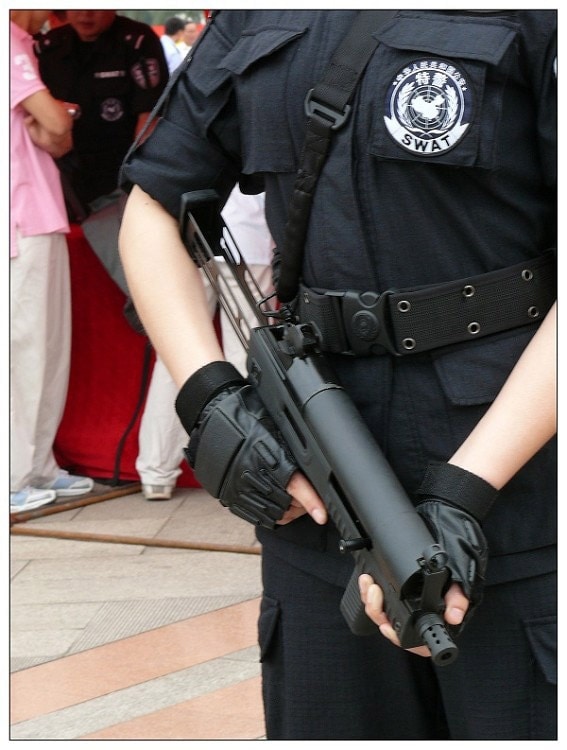 In the early 1990s, the Chinese were looking to replace up to a quarter million 7.62×25 mm Tokarev chambered Type 79 submachine guns. One of the entries in this competition (China is a capitalist communist country—what a tasty contradiction!) was the Chang Feng Corporation’s new polymer framed subgun design. Using a telescoping bolt like the Uzi, and a Calico-style helical magazine, it was chambered in 5.8x21mm. The company lost the competition to the less complicated and still 7.62x25mm Type 85 subgun. Not to let some good R&D go to waste, Chang Feng changed gears, went with 9x19mm, and offered it as a police gun that has been much more successful. 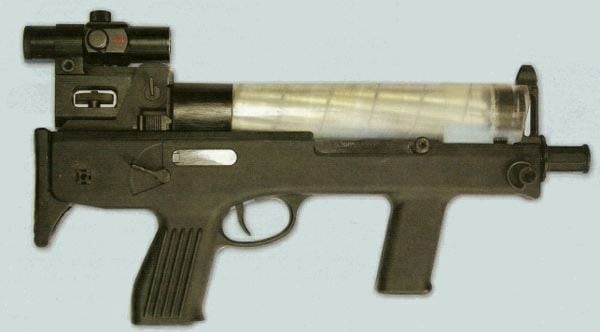 The Chinese have been eager players in international (military) aid in the past decade including giveaways to lots of smaller, third world countries in exchange for favorable 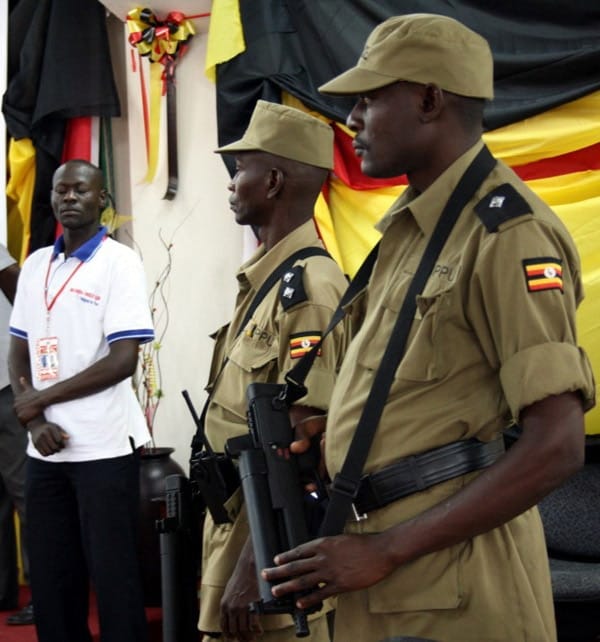 votes in the UN on issues close to China. This has meant the Chang Feng Submachine Gun has been seen popping up from Uganda and Zimbabwe to the newly absorbed Hong Kong. With that being said, they are bound to make cameos in a warzone where US troops are any year now.

Speaking of Chinese helicals, it is believed that China is where Kim Jong-un’s posse got theirs. While Chicom firearms megafactory Norinco isn’t big on press releases, it is thought that they have developed 75 and 100-round 5.45mm magazines for their Type 88, Type 98, and Type 98-1 rifles.

The PP-90M1 (no, that is not a papertowel tube under the barrel).

Besides China, North Korea, and Russia, helical magazine weapons have appeared in some of the strangest places in the past couple decades. In Hungary, there is the Danuvia VD-01, a stockless 9mm machine pistol that looks like a CZ-75 frame has been married to a MAC-10 slide with a 33-round under barrel helical mixed into the batter. Kazakhstan, always a big name in the weapons game, is currently issuing the PP-90M1 subgun to its troops. Built in Russia by KBP, it officially has nothing to do with Izhmash’s Bizon—yet uses the same 64-round 9mm helical mags. 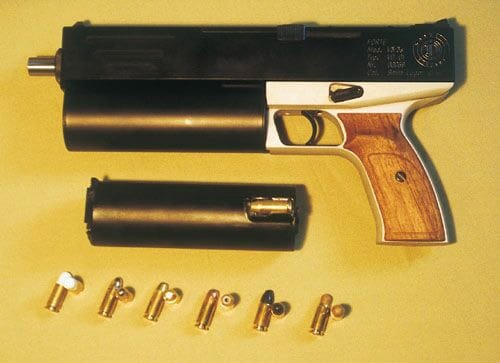 Hey, we don’t judge here, we just report what we find.

And odds are, we’ll find some more helical magazines out there in unusual places soon. Watch this space for updates.