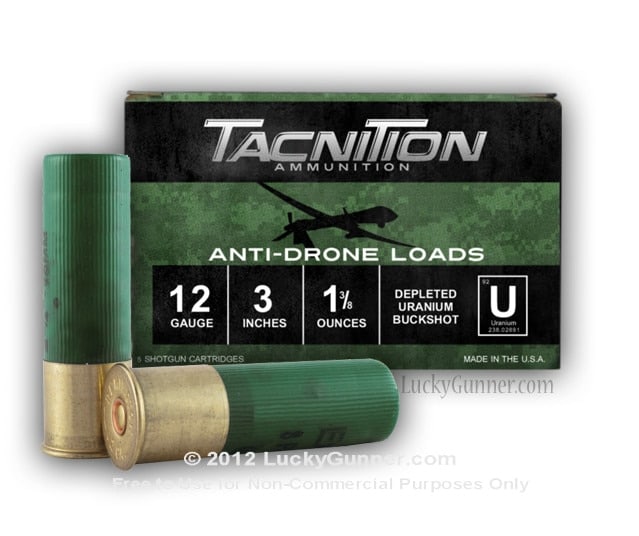 LuckyGunner.com has partnered together with Tacnition to bring to market a new type of anti-drone ammo for the concerned citizen.

These are 3-inch magnums loaded with depleted uranium, so safe storage and handling is of utmost importance.

“Big Brother is watching, and with modern technology, if Big Brother can see it, he can turn it into a giant smoking crater with just the press of a button. Even your secret remote wilderness bunker is no match for today’s military drones. In partnership with Tacnition Ammo, Lucky Gunner is happy to introduce a new way for you to fight back against the All Seeing Eye with our new anti-drone shotgun loads.

“Years of research and development have gone into these highly effective 12 gauge shells that can turn even Joe Biden’s double barrel shotgun into an instant anti-aircraft platform. Specially formulated propellant is capable of launching 9 pellets of depleted uranium rounds up to 1 km straight up into the air. With accurate shot placement, this armor piercing buckshot will disable vital systems on modern military drones. At minimum, the force of impact will disable navigation systems, but in over 60% of our field tests, the drones were incapable of remaining airborne after contact with our Anti-Drone Loads.”

They’re a little spendy at $3.55 per shot, but hey, when it comes to putting drone on the table no patriot sportsman should buy less.