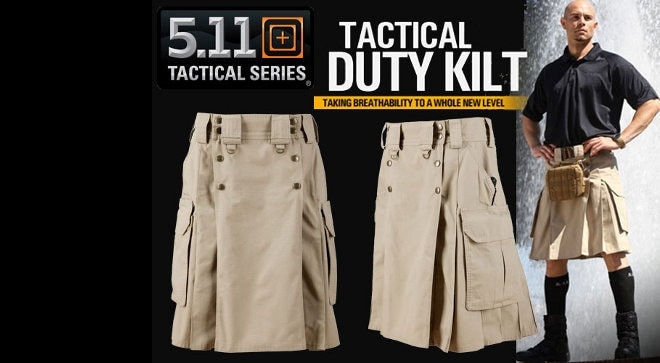 When 5.11 Tactical first introduced the Tactical Duty Kilt, it turned out to be an April Fool’s joke. They underestimated men’s desire to wear dresses and be armed. Demand was so high that 5.11 was eventually pressured into making the kilts for real, and they were, for a time, popular.

Here’s the original 5.11 Tactical Duty Kilt promo, with a visit from the Dropkick Murphys’ own Scruffy Wallace.

Sadly, the Tactical Duty Kilt was discontinued, and men in need of tactical dresses everywhere were left wanting. This would include Mr. Wallace, and would not be forgotten.

Scruffy Wallace has come out against the discontinuation of the Tactical Duty Kilt, and is demanding that Tom Davin, the CEO of 5.11 Tactical, brings it back, in every color of the tactical rainbow.

Joining Wallace in demand for more Tactical Duty Kilts is Kyle Lamb of Viking Tactics a producer of training guides and online accessory retailer and the good people at Breach Bang Clear, who had this to say:

“We were Skyping with some of the band before they rolled out for Australia and the subject came up again.  (Note, important safety tip — don’t video chat with Wallace, or for that matter any drunken Celt, when he’s been drinking if he’s in a kilt, you’ll see tattoos in places that will make you want to gouge your eyes out.) In any case, he got to brooding about it and now he’s thrown down the gauntlet and called 5.11 Tactical out. In fact, not only did he call them out, he specifically called Tom Davin out — on video — and sent it to us.”

Together they hope to not only raise awareness of men in dresses and the ideal Tactical Duty Kilt, they also want to raise money for Wallace’s charity, We Salute You Veterans, an organization that aims to get homeless vets off the streets.

If you want to show your support for Wallace, the Dropkick Murphys and down-and-out vets everywhere, head over to 5.11 Tactical’s Facebook page and let them know you want the Tactical Duty Kilt to come back.