Americans have some sort of weird fascination with oddball European handguns. There are collectors who gush over Russian Nagants, Polish Vis (often called the Radom), and Spanish made Astras and Ruby pistols to the point of obsession. One of the latest additions to this list of hot collector’s pistols from European lands is the CZ 52. Its looks like a Walther PPK on steroids, but it’s one interesting, deadly effective, and affordable pistol. 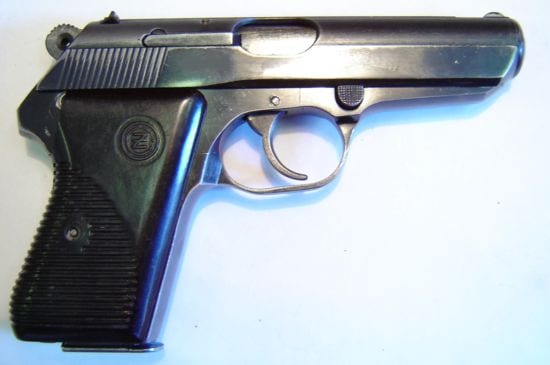 After World War II when the Germans dismantled their Army, the central European country of Czechoslovakia needed new arms as an uneasy peace settled across the continent. Brothers Jan and Jaroslav Kratochvíl of the Czech firm Ceská zbrojovka Uherský Brod (better known around the world as CZ) had earlier designed a .32 ACP 8-shot pistol known as the vz. 50 for the Czech police. The vz. 50 were nearly identical to the Walther PP without the warm, international reception. Just two years after its adoption, the Czech military sent the brothers Kratochvíl back to the drawing board to come up with something bigger and better.

The most common combat pistols in European service in 1952 were 9x19mm Parabellums like the Browning Hi-Power, Walther P38/P1, and earlier vintage Mauser and Luger handguns. The K brothers (we’ll borrow CZ’s marketing strategy here) designed a large frame single-stack, single action pistol in 9mm and submitted it for review. The prototype was similar in size to a Colt 1911, running 33-ounces empty, 8.3-inches overall, and using a 4.7-inch barrel. This design was sent back by the powers that be after the Soviets quietly pulled a ‘nyet’ card on the use of such a ‘Western’ round. 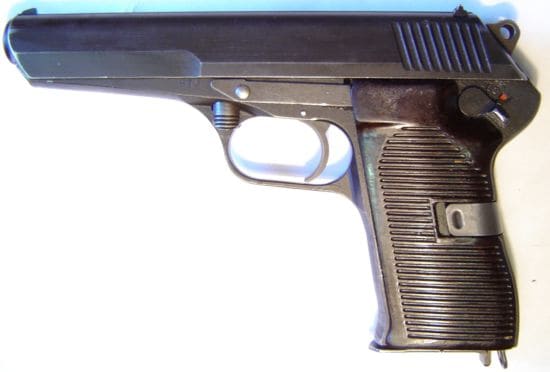 Czechoslovakia was an interesting case during the Cold war.  At the end of WWII, the country was under Soviet occupation and control by default; it was also seen as strategically valuable in Moscow, being on the frontline of 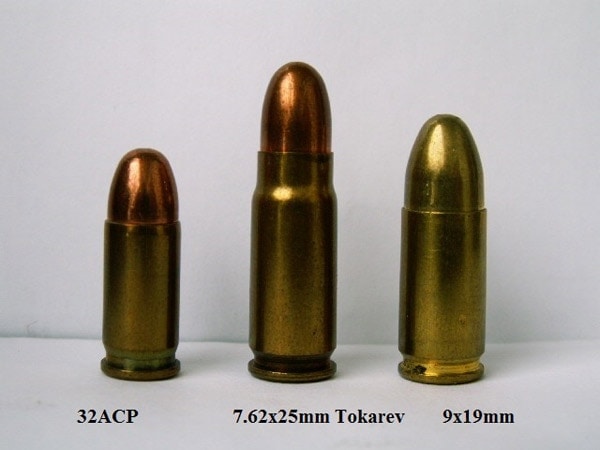 the Iron Curtain, so the Russians took a keen interest in making their presence known.  However the country also had had strong connections to Western Europe and had fostered its own successful, gun manufacturing culture, which the Ruskies hoped to reform in their own image. Such was the case here and what the brothers came up with was the 7.62x25mm Tokarev round as a high-power substitute for 9mm.

This round is a bottlenecked pistol cartridge that the Soviets designed in the 1930s from the super-similar 7.63×25mm Mauser used in the old Broomhandle Mausers of the 1900s. This round used a small 85-90 grain bullet on a long case to achieve velocities of over 1700fps. For an idea of just how fast this is, this faster than the vaunted .38 Super. In recent tests done with ho-hum factory ammo run out of a CZ52, the 7.62x25mm round penetrated 11-inches of gel after it ran through both sides of a NIJ Level II ballistic gel. That’s some big medicine. 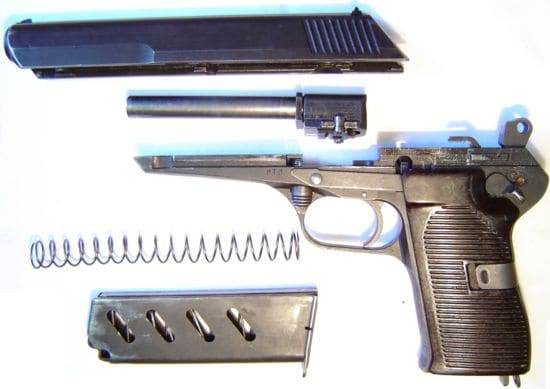 To tame the fury of this round, the CZ-52 is rather unique in the fact that it is the only pure roller-locked pistol we know of that was ever in factory production (can you think of another?).

Instead of having a fully gas operated system, that’s prone to failure, clogging, etc., a German mathematician named Dr. Werner Gruner designed a simple set of rollers that used these parts for locking. The set up was nothing short of genius: Gruner’s concept was tried out first on the MG42 machinegun, arguably one of the most successful designs of modern history.

This mode of roller locking was then tried on rifles later in World War 2. One-off designs such as the Gerat 03 and StG.45(M) led to post war developments such as the SIG STGW-57. HK took the roller lock, coupled with direct blowback, and designed the CETME/HK91/G3/MP5 family of weapons around it. What all of these guns have in common is that they are super-efficient, durable, and effective.  What makes them different is that they are capable of taming high-powered rounds. 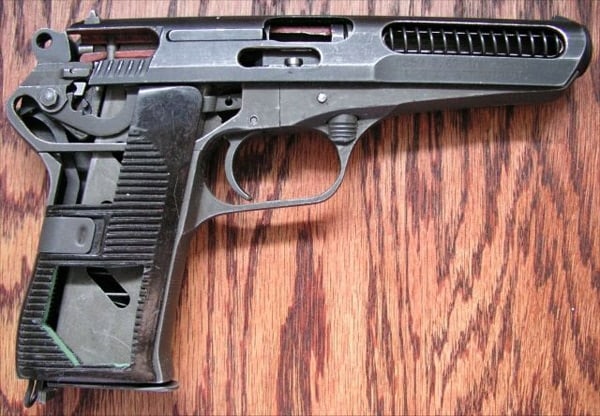 This is the concept that the CZ52 brings to the table. The roller lock on this Czech funny car is composed simply of the barrel, two rollers, and a locking cam. When not firing the recoil spring compresses the cam which pushes the rollers outwards into the slide. When the round is fired, the recoil opens the cam and the pressure further extends the rollers out of the detent and allows the slide to travel. At the end of the arc, the recoil spring snaps the slide forward again and the rollers are cammed back out to hold it locked.

Even in a 33-ounce gun, the fast little bottlenecked round still produces a good bit of felt recoil and a muzzle blast that is sure to scare away bystanders on both ends of the gun. But it works.

Use and Collectability Today

The CZ52 was a hit with the Czech military and some 200,000 were churned out by 1954. These guns served with the Czech Army until the 1980s when they were replaced by the 9x18mm chambered CZ82 but with the Cold War still frosty, the Czechs held on to their used but not abused CZ52s just in case. Once things warmed up and the Soviets disappeared back east, those arsenals of gently used military pistols translated into fast cash for struggling soldiers and citizens in the late 1990s, explaining their recent strides on the collectors market. 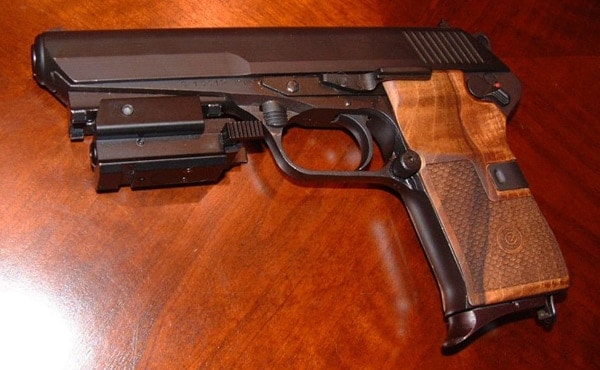 Custom “Americanised” CZ-52 with aftermarket grips and other mods.

Czech handguns have always had a small but loyal element of the collector population in the States. When the famous CZ75 was introduced, one of the first double-stack, double-action wondernines, the guns, and their legion 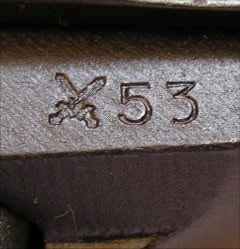 of clones garnered a cult following that paved the way for the easy introduction of the older CZ52.  The fact that they are C&R eligible also made them instantly attractive.

When first imported into the country these guns came in at super low prices. It was not uncommon to see them for $150. Today the pipeline has dried which means the prices are closer to the $250-$300 realm but are still very much affordable. The main problems with these guns is that US-made ammunition is pretty much a non-starter, forcing CZ52 owners into buying surplus Soviet bloc corrosive rounds, or new made (in the Czech Republic!) Sellier & Bellot commercial grade ammo.  That costs about $25/50. 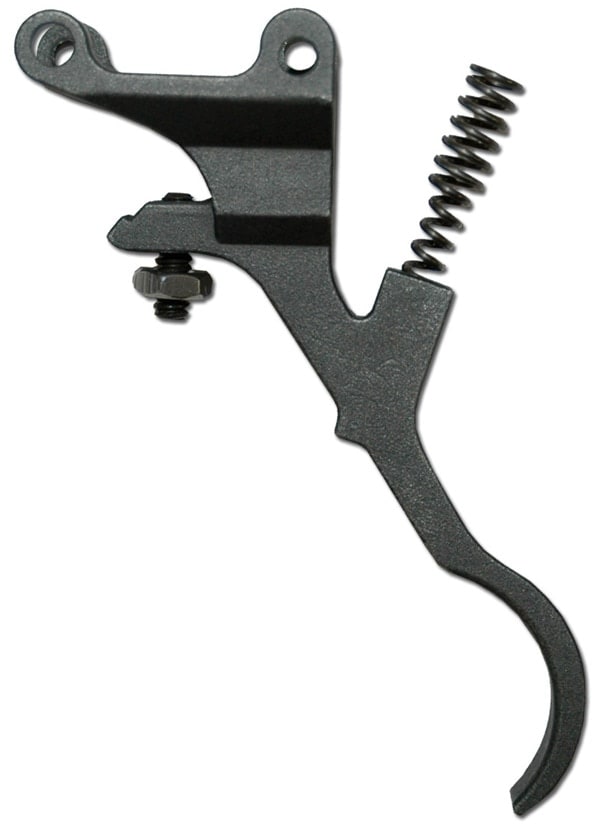 Of course, be aware that the newest CZ52 is still almost 60-years old and the current stock of magazines and spare parts date to the same era. Some competition companies like Harrington are now making limited supplies of new rollers, detents, extractors, and other small internals so if you decide to walk down the CZ path you may want to grab those while you can. The odd two-part grips held on with a clip band have been a source of worry for US owners but companies such as Marschal have stepped up to make replacements in any number of semi-custom grades.

And like the Statue of Liberty says, “Give me your tired, your poor/Your huddled masses yearning to breathe free”…Americans have opened their homes to yet another cast off gun in need of a forever home.  No questions asked.