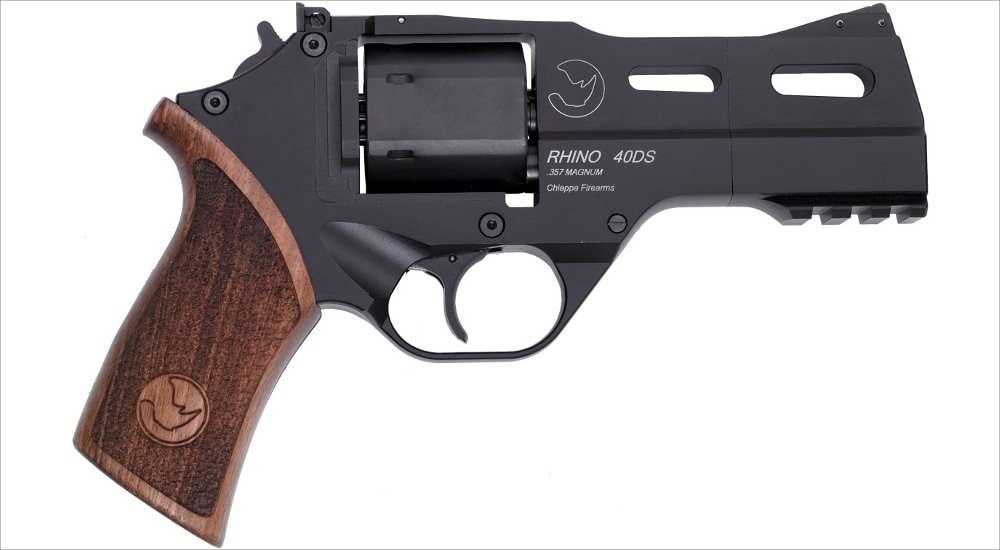 Chiappa recently sent out a press release detailing their Rhino, one of the least conventional revolvers ever designed, reminding the world that it, well, exists. The Chiappa Rhino still exists.

Maybe in the panic to buy up everything ever made for the AR, ever, period, even things like all the buffer tube retainer plates and remaining gas rings on the market, people have forgotten about the humble revolver. Except that’s not true and even wheelguns in oddball calibers like .32 Colt are tough to find because they shoot the only ammo that’s still on shelves.

So what’s the deal with the Rhino? On paper, it’s fairly appealing. It’s a full-size revolver available in sought-out barrel lengths in a lightweight alloy package that balances well in the hand.

It’s low-recoil even with intensely hot .357 Magnum loads, because its bore axis is practically in-line with your wrist. After a long day of shooting, you’ll still feel it, but for that instant when you’re behind the muzzle blast, it’s surprisingly soft.

So why isn’t this the most popular revolver out there?

For starters, Chiappa screwed up the first batch with an unusable trigger. The double action pull was off the scales and crippled the gun’s accuracy. In single action it wasn’t so bad but because of the reversed internals, the faux hammer often took both thumbs to cock. And it’s not like you can take it to the gunsmith to get an action job; on the inside, it’s not like any other firearm.

The bad trigger outpaced the low recoil and turned people off, but thankfully, Chiappa redesigned it to be lighter. It’s not the best in the world, but it’s not in last place, either.

Another update brought a new caliber, .40 S&W. The Rhino handled the snappy round well, but left people wondering why wasn’t it chambered in 10mm? At the case head, the dimensions are close enough that a revolver chambered in 10mm can also fire .40 S&W, sort of the way a .357 can chamber .38 Special.

Finally, some people just can’t get over the looks. There are a few out there who say appearances don’t matter, and you should only focus on the performance. But it’s a chunky, funky-looking gun that doesn’t fit into the revolver mold.

The Rhino is a niche gun, almost a novelty. At the same time, it’s not so different that people are willing to overlook some of its tradeoffs to pick it over other revolvers, or any other firearm for that matter.

That may change soon, though. Chiappa is planning to launch a new generation of Rhinos “in the near future,” maybe the NRA show, one with a polymer frame. We can’t lie, we’re pretty interested all over again. Polymer revolvers tend to have less recoil than alloy ones and some even have better triggers. Who knows, maybe Chiappa developed the Rhino trigger rev. 3 for this model. It could be pretty sweet…

Currently available in 2-, 4-, 5- and 6-inch models with your choice of blue, nickel and now gold anodized finishes chambered in .357 Magnum and .40 S&W, are you (still) interested in the Rhino?