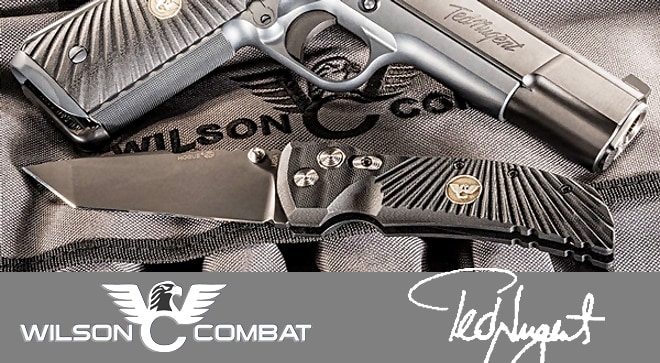 Ted Nugent once said to us, “Guns.com, eh? Story of my life.” Truthfully, we think The Nuge likes more than just guns, but we’re positive he likes everything better with them, just the same. Which is why in order to raise money for the organization Knife Rights — shocker, a knife rights organization — he’s ponying up one custom Wilson Combat handgun.

Ted Nugent said, “I joined Knife Rights to support the great job they are doing; you should too! God Bless Knife Rights!” 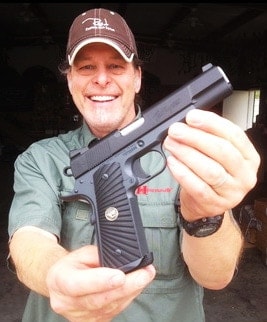 “Knife Rights is at the forefront of knife owner advocacy in this country and Wilson Combat is proud to support their outstanding efforts with a donation of this extraordinary Ted Nugent Signature pistol,” said Ryan Wilson. “We are delighted to work with our good friend Ted, an ardent supporter of Knife Rights, to help further their efforts in fighting the second front in defense of the Second Amendment.”‘

This isn’t just any old 1911, either, it’s a custom Ted Nugent-edition 10mm  CQB Elite, with the rocker’s signature engraved into the slide and a handful of other tweaks personally selected by himself, including Wilson Combat Starburst G10 grips and Bulletproof Magwell, a solid medium trigger and a two-tone black and grey Armor-Tuff finish.

“This full-custom 1911 pistol exhibits everything Ted wanted in a 10mm defensive and general use handgun and is the only mate in existence to his personal Wilson Combat 10mm,” added Wilson.

There are two such guns in existence, and naturally, Nugent has the other. The gun by itself is valued at $4,305.

But that’s not all you get. The prize 1911 comes with a knife, too, a Wilson Tactical-Hogue Knives Star-Light four-inch tanto tactical folder. Designed to be lightweight and sporting a matching set of G10 grips, the Star-Light is a great everyday-carry piece that sports the same Armor-Tuff finish as Ted’s CQB Elite. The knife retails for $250, and will be autographed by Nugent at the NRA Expo next month. 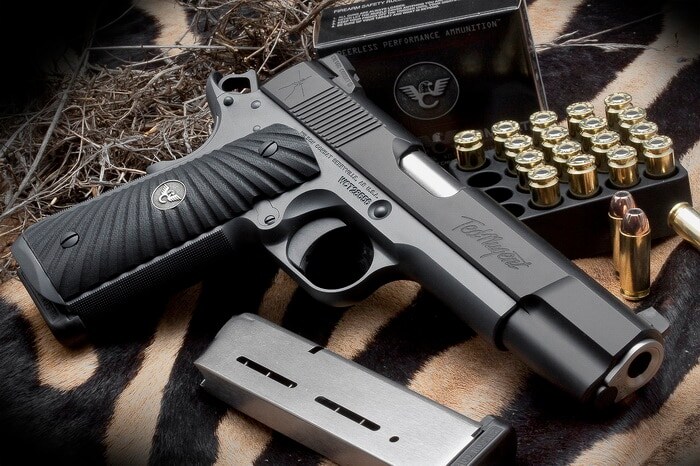 The only way to get the Nugent-Wilson combo is to >make a donation to Knife Rights.

One raffle ticket runs $20, and if you buy three or more you get free tickets and gifts including knives and a free annual membership to Knife Rights.

Head over here to help support Knife Rights and get a chance or two to win this custom Ted Nugent combo.

For more photos of this amazing pistol, check out the gallery.