In the wake of an “assault weapons” ban that has so far been blocked by other legislators, Sen. Dianne Feinstein is now talking about video game control.

Speaking to an audience of about 500 at a San Francisco event, Feinstein said “If Sandy Hook doesn’t do it … then maybe we have to proceed, but that is in the future,” and “a very negative role for young people, and the industry ought to take note of that.”

She said this in light of evidence that Adam Lanza, the shooter, was a fan of “Call of Duty” and “Starcraft,” two of the most popular — that is to say common, mainstream — video games series ever made.

Feinstein is not the first person to come to this conclusion. After the Newtown shooting spree, Sen. Joe Lieberman said, “The violence in the entertainment culture — particularly, with the extraordinary realism to video games, movies now, et cetera — does cause vulnerable young men to be more violent.”

“Very often, these young men have had an almost hypnotic involvement in some form of violence in our entertainment culture, particularly violent video games, and then they obtain guns and become not just troubled young men but mass murderers,” Lieberman added.

Colorado Gov. John Hickenlooper is on the same page. “There might well be some direct connection between people who have some mental instability and when they go over the edge — they transport themselves, they become part of one of those video games. Perhaps that’s why all these assault weapons are used.”

The National Rifle Association’s own Wayne LaPierre has also pointed the finger at video games. “There exists in this country a callous, corrupt and corrupting shadow industry that sells, and sows, violence against its own people. Through vicious, violent video games with names like Bulletstorm, Grand Theft Auto, Mortal Kombat and Splatterhouse.”

Even Donald Trump has chimed in. “Video game violence and glorification must be stopped — it is creating monsters!”

But there’s a problem with this. Just as the number of guns and gun owners has increased as violence and mass killings become less common, so has the popularity of video games, including violent video games. 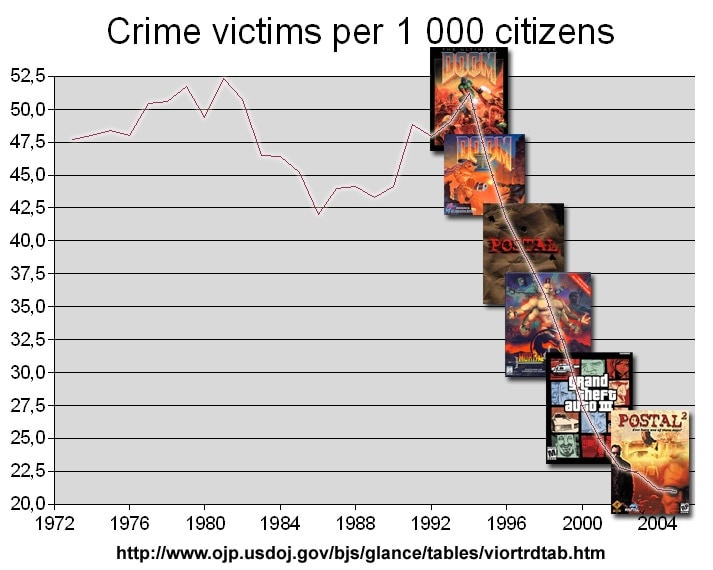 “Grant Duwe, a criminologist with the Minnesota Department of Corrections who has written a history of mass murders in America, said that while mass shootings rose between the 1960s and the 1990s, they actually dropped in the 2000s. And mass killings actually reached their peak in 1929, according to his data. He estimates that there were 32 in the 1980s, 42 in the 1990s and 26 in the first decade of the century.

“Chances of being killed in a mass shooting,” he said, “are probably no greater than being struck by lightning.”

However the chances of owning a copy from the “Call of Duty” series is considerably higher, with estimates putting the number of copies sold at well over 100 million, and that’s just one franchise.

And the industry has taken note of that. With legislators talking about establishing some type of video game control, it’s important to recognize that the industry already has a voluntary ratings system in place, on that’s considered to be more effective than the film industry’s.

If Feinstein does attempt some type of video game control, it will be an uphill battle, as not only do video gamers make up a sizable percentage of the nation, but the Supreme Court has also held that video games constitute protected First Amendment speech.

“‘As a means of assisting concerned parents it (the law the Supreme Court overturned) is seriously overinclusive because it abridges the First Amendment rights of young people whose parents (and aunts and uncles) think violent video games are a harmless pastime,’ wrote Justice Antonin Scalia for the majority.”

After Feinstein finishes with video games, which amendment do you think she’ll go after next?