With the help of two armed citizens, police arrested a man accused of robbing three different pharmacies in Phoenix, Arizona, on March 25. 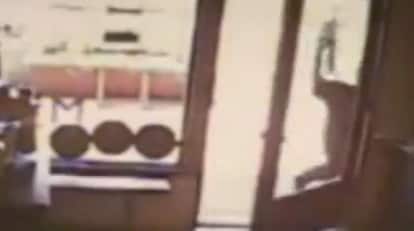 James Johnson, 43, complies with the two armed citizens who begin to detain him.

In all three incidents Johnson walked in the store, pointed a handgun at the clerk and demanded prescription painkillers, which has become a popular drug in the area, according to area police.

Police said Johnson’s crime spree started around 9:30 that Monday morning when he walked into a local pharmacy, pulled a handgun on an employee and demanded Oxycotin. The clerk compiled and quickly turned over the pills. With the drugs in hand, Johnson ran out, jumped into the passenger seat of a black Ford Expedition and took off.

About two hours later, Johnson ran into another pharmacy located about 20-minutes away from the first scene, pointed a gun at a pregnant employee and passed her a note demanding Oxycotin pills, but before she or the clerk beside her could comply, a third employee stepped out with a gun in hand and trained it on Johnson.

Staring down the barrel of a gun, Johnson began to comply with the armed employee’s demand to “get down on the floor” as seen in the video. However, before the employee could make another move Johnson hopped up and dashed out the store empty-handed.

About 40 minutes later, Johnson walked into a third pharmacy, located about 23-minutes away from the second, and, once again, pointed his gun at an employee and demanded their entire supply of Percocets.

According to local reports, while employees were gathering the pills, a customer slipped out of the store to go get help.

The employees handed Johnson the pills and he promptly exited the store, but outside he was confronted by two armed citizens.The video shows the citizens walk toward Johnson with their guns trained on him and Johnson complying to their demands by getting down on the ground. The two armed citizens disarmed and detained Johnson until police arrived to arrest him.

Johnson was taken without incident and is facing charges of armed robbery and aggravated assault, however, police are now on the lookout for a second person who they believe acted as Johnson’s getaway driver.