We here at Guns.com feel it is our duty to keep a beat on what’s being done “back home” to serve those who have served us through their participation in the U.S. military. It’s a sad reality that in 2013 heroes, from those who saw combat long ago to those just returning from Iraq and Afghanistan today, are still struggling, often alone, to maneuver back into civilian life, be it because of physical, financial or psychological handicaps. We’re also dog people. Combine all of it and throw in the word ‘free’ and you can bet you’ve got our attention. 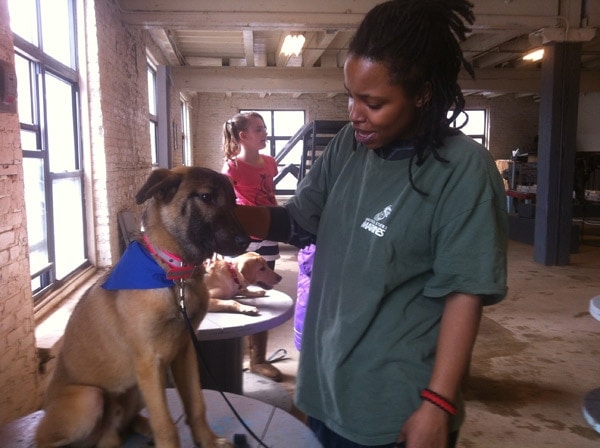 Founded by dog trainer Toriano Sanzone , 7DDV is a Chicago based non-profit program that pairs veterans with dogs in an intensive four-week training program, designed to improve the quality of life for veterans at no cost to the service member. Vets and pets are matched according to temperament, lifestyle and the specific needs of both soldier and canine. ‘Needs’ include service dogs for wounded veterans and with a specific emphasis on those suffering from Post Traumatic Stress Disorder. Animal companions have been clinically proven to have a positive impact on PTSD symptoms and dogs in particular are helpful for minimizing anxiety and encouraging greater socialization.

“We started this program about a year ago … after I got the opportunity to ‘hang out’ with five Army Rangers for four months,” said Sanzone, who also runs his own dog training school and who’s client list boasts some of the biggest names in the NFL. “Some of the stories I was hearing about what was going on with returning veterans were horrendous. [They] can’t get their benefits here at home. One guy told me about how he had to fight to get his glasses covered and his medication.

“What we’ve done [with 7DDV] … is everything is 100 percent free for service members. [In the coming months] this facility will be only catering to veterans.”

And from where we’re standing it’s a heck of deal too: Veterans accepted into the program will receive four weeks of bottom up training, continued support after the program ends on a walk-in basis with a personal coach and also still get to go home with a doggie bag, which includes a leather leash and collar, a crate, and a two month supply of food. In the age of organic dog food and designer collars, these “start-up” costs can get substantial quick, and the program aims to create companions for these veterans with as few headaches as possible. Guns.com stopped by 7DDV’s facility the other day on Chicago’s south-side to see the program in action and we met Jennifer Mccarter, a U.S. Marine with three tours in Iraq on her resume. Jennifer told us she met ‘T’ (Toriano) through a friend about six months ago:

“I did 8 years in Iraq and I got out in ’09. I was in the hospital for about a year and half and in the past it was hard where I was living to have a dog … so once I got turned on to ‘T and 7DDV’, I couldn’t stop. When I feel alone all I have to do is talk to the dog and he’ll listen … he’s there for you with unconditional love and I love that.” 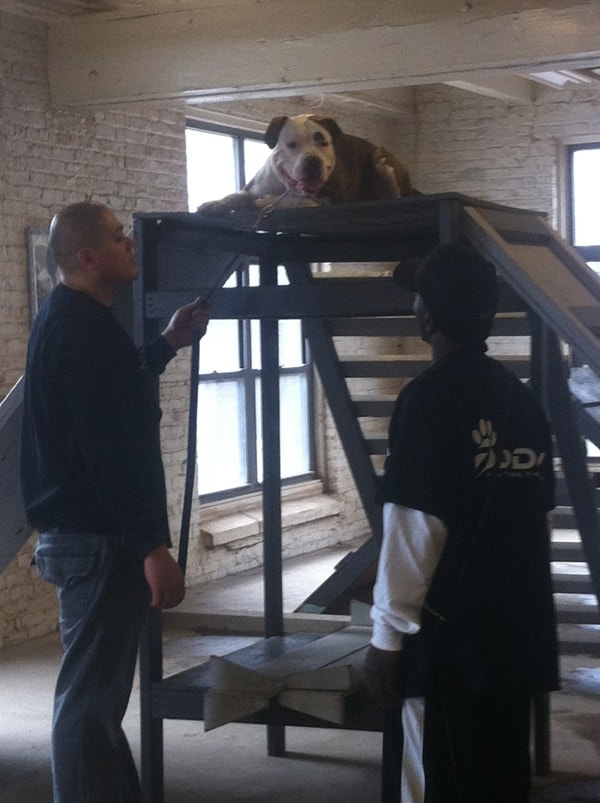 Toriano works with vet and pet on agility training at his Chicago facility.

New classes start the first Saturday of each month and participants must commit to four weeks of training to fully develop the intended relationship between dog and owner. At the end of the course, veterans take the Canine Good Citizen test (conducted by an independent AKC recognized administrator) to demonstrate their mastery of commands, safety and overall compatibility with the animal.

The service is free for all Veterans, but with a special invitation to those recently returning from Iraq and Afghanistan. 7DDV recently formed a partnership with the VA and there are plans to take this program to the national level very soon.

7DDV co-founder Rachel Silverman told us, “We spoke with the VA and we’re planning on setting up chapters of 7DDV across the country.”

Additionally, if you are a civvie and 7DDV’s program/philosophy interests you, you can attend at a cost of $40 a class — half of this money will go directly to funding the non-profit 7DDV program.

“What we’re trying to do is bring awareness to what’s going on with our [veterans] … the VA is open to the public and I encourage everybody to go see the situation for yourself, ” added Sanzone.

With the VA working on a backlog of benefit claims, which has grown to nearly 1 million-more than double what it was when President Obama took office, Guns.com applauds any civilian organization adapting what they do professionally to serve those who have given so much for the freedoms we enjoy in this country. We’re hard pressed to think of a better spokes animal to get people’s attention about a serious issue most folks simply don’t want to think about than man’s best friend.

Be sure to check out 7DDV’s site here and any veterans interested in joining this program can submit an application here.