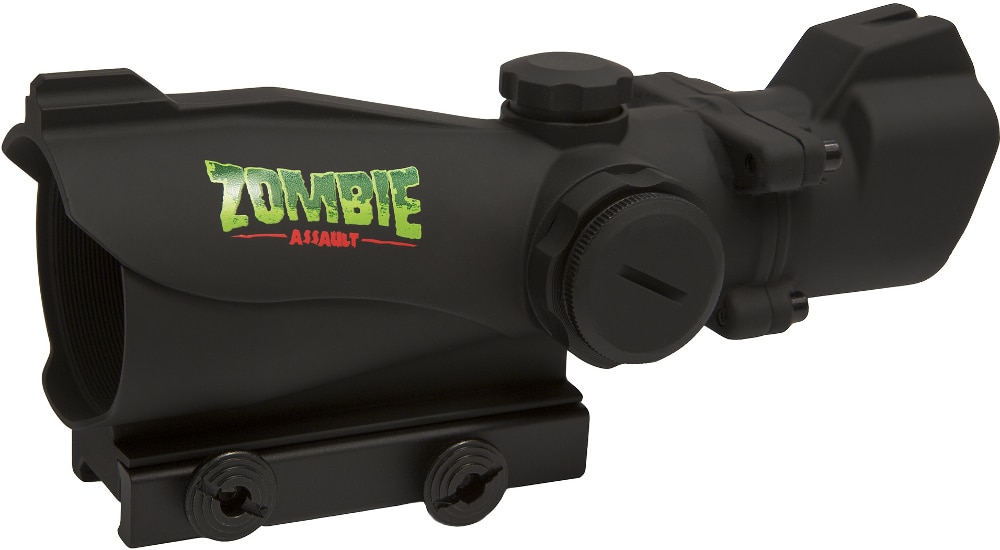 For when you absolutely, positively need to kill every zombie in the horde, but are on a budget, you want a Bushnell 1X MP Zombie Assault sight. Despite being a lower-cost option in the undead optic showcase, the newest MP-series red dot is solid and reliable.

Based on the existing Bushnell 1X MP red dot sight, the ZA model comes with a multi-color brightness-adjustable reticle that can be set to display in either red or green with five brightness settings, giving you options whether you’re shooting zombies, or practicing your anti-undead skills indoors and out.

It also has a set of iron sights built into the body of the scope for when things really hit the fan.

Realistically, it’s no different than Bushnell’s existing 1X MP, a popular low-cost red dot sight that’s proven to hold its own and withstand rough handling without needing to be re-zeroed and having a rugged polymer exterior that doesn’t show wear too easily. About the only thing people have found about this sight is that, because the ocular lens is a bit restricted it doesn’t work well mounted far forward on a rifle, even though it has unlimited eye relief.

With its smaller 3-MOA center reticle dot, it’s precise for longer shots and with a T-dot reticle for fast transitions and up-close shooting.

It is of course waterproof and shockproof and nitrogen purged. It measures in at just under seven inches long and one pound heavy.

The Zombie Assault branding is about all that sets this red dot apart from its predecessor, and it’s not like Bushnell is charging more for it. The MSRP is $200, which means that it, like the standard 1X MP, will retail for $150-175.

If you’re putting together a zombie gun on the cheap, want to have fun with the whole undead thing without dropping a lot of scratch on your project rifle, you may want to check this out. It’s a whole lot cheaper than the EOTech Zombie Stopper and Leupold VX-R, which run around $500-600.

For more info, check out the press release. While Bushnell doesn’t have a product page listed yet, we would be greatly surprised if it’s an iota different than the standard 1X MP.