No Serbu For You, Soup Nazi Wants His Image Back

Mark Serbu, owner of Serbu Firearms, has gotten the Florida based gun company into some hot water with Seinfeld “Soup Nazi” actor Larry Thomas.  Thomas is most well known for his guest star appearance as “The Soup Nazi,” on episode 6 of Seinfeld‘s seventh season, which aired on November 2nd of 1995. 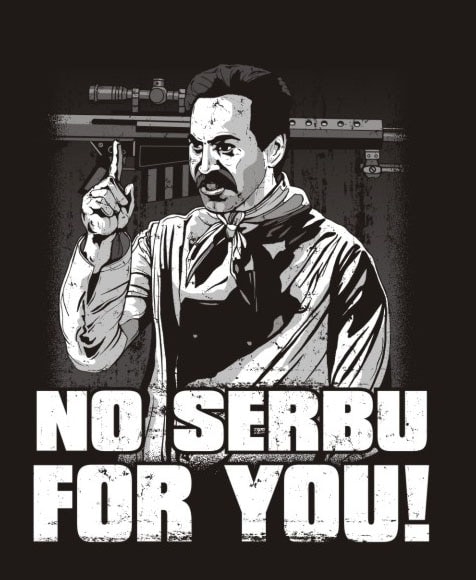 This whole thing started when Serbu decided that the company wouldn’t sell guns to the state of New York.  Not the citizens of New York.  The state prohibited that.  But the governmental agencies and law enforcement officials who were interested in the capabilities of the Serbu 50 BFG.

While no actual orders had been placed, the NYPD had submitted a request for evaluation guns.  But after the passage of New York’s SAFE Act, Serbu politely declined the invitation to send their rifles up for testing.

Company founder Mark Serbu wrote to the NYPD, “Unfortunately, we have a policy of selling to state law enforcement agencies only what is allowed to be sold to private citizens in that state. Since the passage of the NY SAFE act, the BFG-50A is considered an assault weapon and as such is no longer available to private citizens in the state of New York. Therefore we have to respectfully decline to supply your department with BFG-50A rifles.” 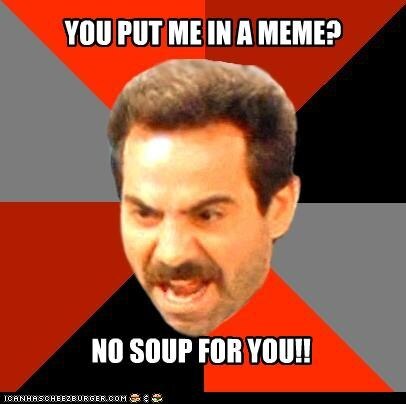 No meme for you!

The decision to forgo gun and ammunition sales to states that are denying guns and ammunition to their citizens has proven popular with just about everyone who supports second amendment rights.  Still, Serbu didn’t let it rest there.  Instead, the company commemorated their decision with a T-shirt.

The shirt is meant as a satire.  It is an apt social statement that is built less on Larry Thomas’s role as the Soup Nazi and more on the simple “No soup for you!” catchphrase, which has become an internet meme. 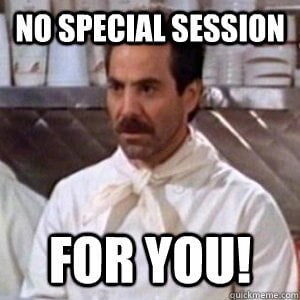 For those unfamiliar with the episode, I’ll provide a bit of contextualization.  Seinfeld, the show, was intimately linked with New York City.  And Larry Thomas’s character, The Soup Nazi, is uniquely New York.  He’s an ambiguous ethnic portrayal of New York angst.  The Soup Nazi denies the sale of soup to customers he finds annoying.  He denies soup the same way the SAFE Act denies guns.  And almost as arbitrarily.

This is exactly why the Serbu shirt is funny.  In a sad kind of way.  Not the shirt, I mean the irony.  Even in the midst of these depressing and legislatively dark times, Serbu can make fun of itself, and laugh, and make a poignant political satire out of a piece of tired 90’s pop-culture.

But Larry Thomas, the actor who portrays the Soup Nazi, isn’t laughing.  Despite the bastardization of his Soup Nazi image, Thomas felt protective when it seemed like his image might be endorsing a firearm company.

“I own the rights to my image as the Soup Nazi,” Thomas told the NY Post. “Serbu did not ask my permission, and Facebook won’t take the image down. Not only did they do this without my authorization, but also I am an advocate of gun control.”

No t-shirt for you!  The uproar over the Serbu shirt has put him back in the spotlight, but not in the light he would like.

“I was pretty shocked,” Thomas told The Huffington Post.  “Really? You’re clinging to the second amendment of the Constitution and you wear it like a blanket and yet you’re totally not aware that you’re not allowed to use someone’s personal image on your product without their permission?” 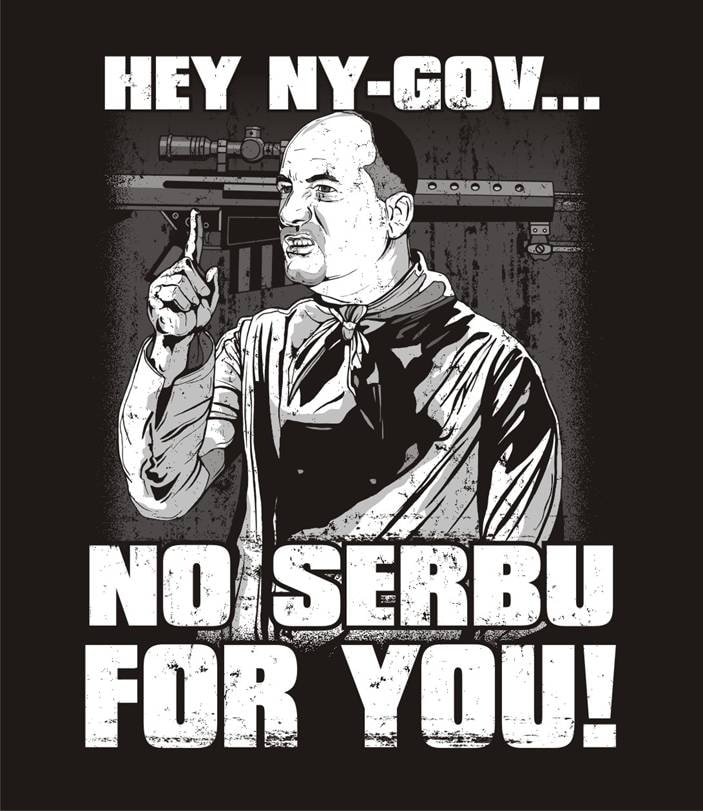 He has a point.  And Serbu acknowledged as much by immediately pulling the t-shirt idea.  He’s put out a new version of the shirt with his image in place of Larry Thomas’s.

“Anyone who doesn’t think we need some kind of gun control worries me,” Thomas told the Huffington Post. “I don’t think I’m extremely political in any way, but boy, I’m getting a lot of heat from the gun enthusiasts like I’m going to be the guy taking away their guns.”

Thomas claims Serbu’s appropriation of his image is the most egregious misuse of the Soup Nazi yet.  He must not remember Albert Gonzalez, who used the online moniker “soupnazi.” Gonzalez, a former government informant, was convicted in 2009 of hacking 170 million credit and debit card accounts.

Thomas’s desire to protect his image is understandable.  In addition to his Soup Nazi role that earned him a 1996 Outstanding Guest Actor in a Comedy Series Emmy nomination, Thomas has portrayed such cultural luminaries as Osama Bin Laden and Saddam Hussein.  Image is everything.

So, just so we’re all on the same page here….  Larry Thomas did not write the Soup Nazi character, or the episode.  Thomas actually based his character’s accent on that of Omar Sharif in Lawrence of Arabia.  Thomas, who’s character is actually based on a living person who is upset by both the “Nazi” title and Thomas’s fictionalized portrayal of him, doesn’t want someone else to cut in on his territory.  That’s how copyright works.

I spoke with Mark Serbu last week about picking up one of Serbu’s ass-kicking .50s, and he’s still laughing about the situation. “Our guns have been in more movies than he has,” Serbu said. 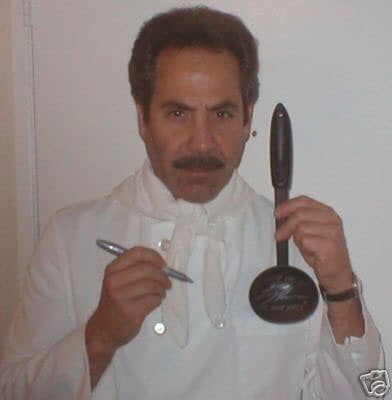 Serbu acknowledges that the image is a clear violation of copyright.  Thomas owns the rights to his image as the Soup Nazi.  “As soon as he contacted us, we agreed to stop.  We didn’t want a lawsuit.”

“The media’s been making a big deal out of this,” Serbu said, “but it really wasn’t that ugly.  But the coverage has really blown up.  Our Facebook page went from like 2,000 likes to 8,000 overnight.”

As I write this, they’re at 8,430 likes.  I think we can do better than that.  While Guns.com doesn’t support the violation of copyright, we do stand behind Serbu and the people of New York.  And we feel for Larry Thomas.  But he’s getting good press time, too.  And, if you pay him money, Thomas will write his name in a spoon.