In the battle over reforming the nation’s gun laws, gun control proponents are always angling to get law enforcement on their side.

Because it’s all about establishing authority on the subject.  Rhetorically speaking, it’s called ‘an appeal to authority,’ for those familiar with Aristotle’s On Rhetoric the term ‘ethos’ should ring familiar.

To explicate, the argument for tougher gun laws instantly appears more credible to the public if police officers, those who are tasked with protecting and serving a community, are seen backing the cause.

That’s part of the reason why President Obama spoke last week at the Denver Police Academy Campus, in front of a bunch of rank and file law enforcement officers.  He wanted to exploit their authority on the subject to garner support for his gun control agenda.

Consider the following excerpt from his speech:

And from the beginning of this effort, we’ve wanted law enforcement front and center in shaping this discussion and the reforms that emerge from it — because law enforcement lives this every day.  Law enforcement are the first to see the terrible consequences of any kind of violence, certainly gun violence — lives lost, families broken, communities that are changed forever.  They’re very often in the line of fire.  The law enforcement knows what works and what doesn’t, and so we wanted that experience and that advice.

Then on Monday, when Obama traveled to Hartford, Connecticut, to make yet another pitch for universal background checks, bans on so-called military-style ‘assault’ weapons and magazines that hold more than 10 rounds, he again brought up police officers in his address.

Then again, later on in the same speech:

It’s a cunning tactic.  And it’s typically effective in most contexts.

However, with respect to gun control, the argument that the everyday police officer – not the top brass, i.e. those high-ranking officials who can be bought and swayed by political elites (Bloomberg types) – but the beat cop or average patrolman supports Obama’s agenda or believes it would be effective at reducing violent crime is specious.

A new poll, conducted by PoliceOne.com, that surveyed 15,000 current, former or retired police officers confirms that when it comes to the White House’s push for tougher gun laws the vast majority of law enforcement is not on board.

Here are some highlights from the poll:

Officer safety.  As Obama said, “That’s what this is about.”  Well, what percent of respondents believe that tougher gun laws would improve officer safety? 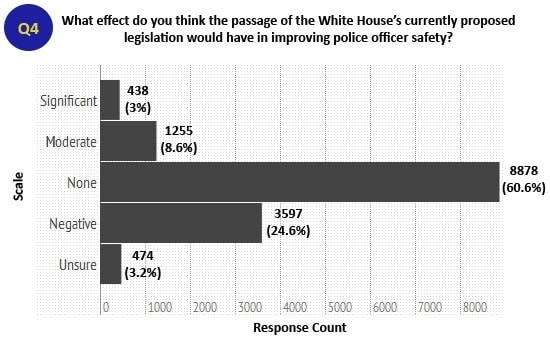 As noted by the author of the poll, approximately 85 percent believe that “the passage of the White House’s currently proposed legislation would have a zero or negative effect on their safety.”

To take another hot-button topic, banning magazines that hold more than 10 rounds and its impact on violent crime.  Here’s what respondents had to say to that measure: 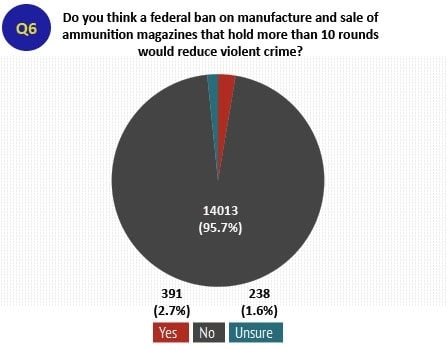 As with the magazine ban, a majority of respondents also felt that banning ‘assault’ weapons would not have an impact on violent crime: 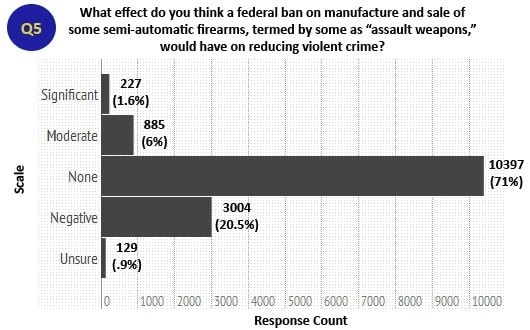 As for supporting arming teachers and/or school administrators, something the National Rifle Association has recommended as part of its Shield Program, a majority of police officers believed that as long as the individual is vetted, trained and qualified annually, it’s a good idea. 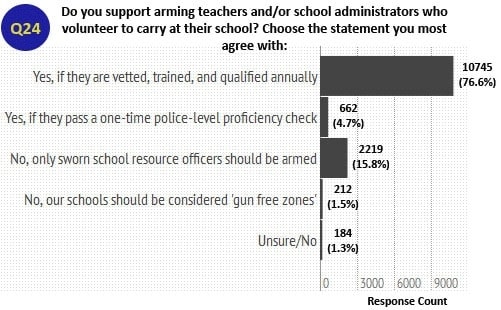 Respondents were also asked about the best way to prevent future mass shootings.  Of the options presented, more expansive concealed carry laws was the number one choice. 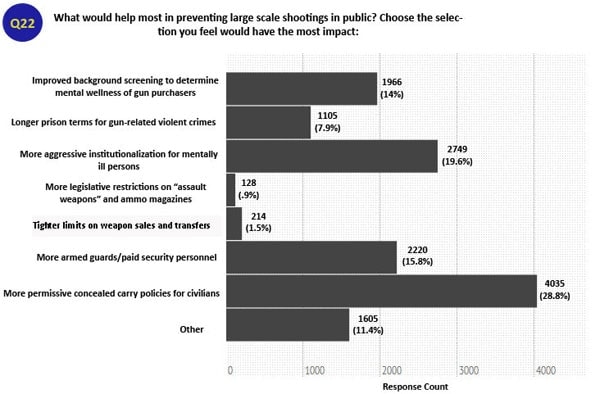 Finally, and to continue with the notion of concealed carry, an overwhelming majority of police officers support allowing law-abiding citizens to carry a firearm for self-defense outside the home.

Well, for starters, I think the author of the poll — Doug Wyllie, the Editor in Chief of PoliceOne —  said it best:

Contrary to what the mainstream media and certain politicians would have us believe, police overwhelmingly favor an armed citizenry, would like to see more guns in the hands of responsible people, and are skeptical of any greater restrictions placed on gun purchase, ownership, or accessibility.

The officers patrolling America’s streets have a deeply-vested interest — and perhaps the most relevant interest — in making sure that decisions related to controlling, monitoring, restricting, as well as supporting and/or prohibiting an armed populace are wise and effective. With this survey, their voice has been heard.

But, beyond that, I’d like to add that we constantly hear gun control advocates say that “90 percent of the public supports universal background checks.”  They typically follow that up with, “You cannot get 90 percent of the people to agree on the weather.”

Well, I’d like to start reminding the public that, according to this survey, 90 percent of police officers favor the concealed carry of firearms by civilans.  And due to the fact that they are, as the President said, “very often in the line of fire” and that they “know what works and what doesn’t” we should all take their advice seriously.

On this front, why isn’t the President pursuing legislation that would legalize ‘shall-issue’ concealed carry laws in all 50 states, with universal state-to-state CCW reciprocity?   Seems a logical step to help combat violent crime, if we are really listening to what law enforcement is telling us.

You can read Doug Wyllie’s coverage of the poll here or see the entire 28 questions here.  Check ’em both out.