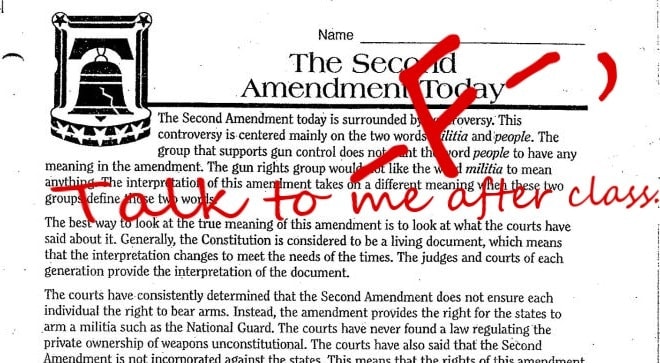 A Bristol, Connecticut, dad, Steven Boibeaux, is furious at his son’s school for teaching him and the other eighth grade middle school students that the Second Amendment and gun rights are not individual rights.

The worksheet, published by Instructional Fair used in the kids’ social studies class, reads “The Second Amendment today is surrounded by controversy. This controversy is centered mainly on the two words ‘militia’ and ‘people’. The group that supports gun control does not want the word ‘people’ to have any meaning in the amendment. The gun rights group would not like the word ‘militia’ to mean anything.

“The best way to look at the true meaning of this amendment is to look at what the courts have said about it. The judges and courts of each generation provide the interpretation of the document.

“The courts have consistently determined that the Second Amendment does not ensure each individual the right to bear arms. Instead, the amendment provides the right for the states to arm a militia such as the national guard. The courts have never found a law regulating the private ownership of weapons unconstitutional.”

“I am appalled,” said Boibeaux in an interview with Fox News. “It sounds to me like they are trying to indoctrinate our kids.”

The worksheet is, of course, completely incorrect as the courts have affirmed the Second Amendment as an individual right and overturned many laws regulating private ownership of firearms, in famous decisions such as District of Columbia v. Heller and McDonald v. Chicago, both of which are in stark opposition to the lesson.

It’s also misrepresenting the way the court system works, and it stands to reason that no such worksheet should be used to teach any class.

“This idea that this school is propagating that the Constitution can simply be changed at the whim of someone — or that the Second Amendment does not protect the individual right to bear arms is absolute propaganda and absolutely false,” said Mat Staver of the Liberty Counsel. The school has pulled the worksheet from the curriculum.

“It is no longer an assignment in that particular school,” said Ellen Solek, the superintendent of the school district.

That still leaves a lot of questions. If this worksheet is misrepresentative of the Constitution to this degree, what about the other lesson plans? Did Instructional Fair produce the works prior to Heller and McDonald? Is the lesson still in use at other schools?

This should worry more than just the Boibeaux family. Even if you’re not gung-ho about guns, this lesson is just a fabrication, a lie, and puts not just one teacher, one class or one school in a negative light. This brings up concerns about the entire curriculum.

Do you help your kids with their homework? How about after this?