Here’s a question for ya: What the heck should we do about North Korea?

I’m not sure I have a cogent answer.  Personally, I’m conflicted. The libertarian side of me is telling me to “Let ’em be,” that “They’ll eventually collapse under the weight of their own dysfunction.”

But the Neo-con in me is saying, “Non-interventionism is a fundamentally flawed approach to a failed state that has a nuclear arsenal and a track record of committing human rights violations against its own people.”

To answer this question, it might help to consider where things are currently at with The Democratic People’s Republic of Korea and its rotund, man-boy leader Kim Jong-un.

Like a railbird at a poker tournament, North Korea likes to talk a lot of junk.  And lately, they’ve been doing a lot of chirping. 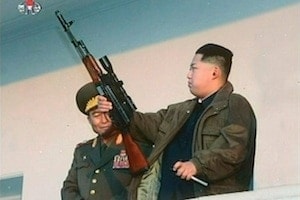 This week, in fact, the Korea Asia-Pacific Peace Committee, a North Korean state agency, released a statement instructing foreigners to leave South Korea because the North “does not want to see foreigners in South Korea fall victim to the war.”

“The situation on the Korean Peninsula is inching close to a thermonuclear war due to the evermore undisguised hostile actions of the United States and the South Korean puppet warmongers,” said the North Korea Peace Committee (There’s something so Orwellian about that agency’s name, see Hitchens video below for more on the parallels).

Further warning that, “Once a war is ignited on the peninsula, it will be an all-out war.”

Backing into a corner

Those were fighting words.  But many in the international community see North Korea as all bark and no bite.

Consequently, dear leader aka Kim Jong-un feels like he has to put up or shut up.  He recognizes that he’s got to do some serious saber rattling otherwise he’s going to lose what little street cred he’s got left.

He’s backed himself into a corner, as Adm. Samuel J. Locklear III, commander of the U.S. Pacific Command, explained to the Senate Armed Services Committee at a recent hearing.

“His father and his grandfather, as far as I can see, always figured into their provocation cycle an ‘off ramp,’ ” said Locklear.  “And it’s not clear to me that he has thought through how to get out of it. And so that’s what makes this scenario, I think, particularly challenging.”

So, now, dear leader wants to test fire some mobile, long-range ballistic missiles to prove to the world — and, perhaps, himself and his inner circle of chicken hawks — that he says what he means and he means what he says.

According to a U.S. official who spoke to CNN on the condition of anonymity, the test launch is of these missiles could be considered “imminent” and is likely to occur without warning.

“We hope they issue a notification, but at this point we don’t expect it. We are working on the assumption they won’t,” the official said.

Thankfully, the U.S. has satellites and radars circling the skies that will be able to determine the trajectory of the missiles once they’re fired.  If they are headed toward South Korea or Japan or any other nearby country, the U.S. has said that it has the capacity to shoot them down.

Is the threat real?

Well, to sum up Locklear’s assessment: in the long term, it’s not good.  In the short term, we’ll be okay. 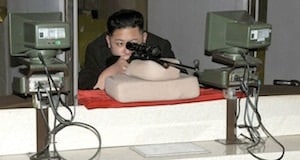 “A major conflict in Korea could have unpredictable, long term and far reaching impacts due to the central location of the Korean peninsula in Northeast Asia and the vital importance of Northeast Asian trade to the global economy,” Locklear told the Senate committee.

“North Korea’s nuclear weapons and ballistic missile programs, its illicit sales of conventional arms, and its ongoing proliferation activities remain a threat to regional stability and underscore the requirement for effective missile defense,” he added.

It should also be noted that with over 1.1 million troops, North Korea has the fourth largest standing army in the world.  That’s a lot of manpower.  Assuming they’ll all be strapped with AKs, that’s a pretty formidable force.

We’re back to where we began.  What do we do?

Some suggest that China could be the key to getting North Korea to play nice.  Due to the fact that China is North Korea’s sole trading partner, it has invaluable leverage over Pyongyang.

To some extent, China has already telegraphed its dissatisfaction with Kim Jong-un’s war posturing.  This past weekend, Chinese President Xi Jinping said that no nation “should be allowed to throw a region and even the whole world into chaos for selfish gain.”

Locklear believes that China will eventually come around to helping the U.S. put North Korea back in its place.

“There no benefit to the Chinese of having this type of activity occurring on their borders, no possible benefit that I can see from this. So they will, I believe, in time, work this problem to their national interest just like we do and the South Koreans do,” Locklear said at the hearing.

However, can we depend on China to give us a hand?

But in the meantime, what should we do to stabilize the region?  Should we consider swift and direct military action?  Or should we let things play out, continue to allow the dear leader to play his war games?

EDITED TO ADD THIS VIDEO: