For a long time now, Sen. Dianne Feinstein (D-CA) has been in an imaginary war with firearms that has had negative, real world consequences for gun owners.  The clarion voice of the modern gun control movement, aside from maybe New York City Mayor Michael Bloomberg or increasingly President Obama, no one works more obsessively to subvert the Second Amendment rights of law-abiding citizens they don’t even know than she.

In the eyes of many gun owners, Feinstein is public enemy number one and on Thursday, the senior senator from California took to the airwaves (as she has done for the past 30 years) to appear on MSNBC’s Morning Joe.  The topic of discussion: Congress’s latest effort to reform the nation’s gun law and the interview lasted almost a full 12 minutes.  But what struck us wasn’t the length, rather how much ., misinformation Sen. Feinstein was able to fit in that short span of time.

Now we’ve all heard Feinstein shoot from the hip before, in fact in 2013 it’s easy to dismiss her because it’s all many of us have come to expect, but in Guns.com’s elephant-like memory this interview may take the prize.  Literally, every other line Feinstein delivers is nonsense; she blatantly misrepresents the truth, hews the conversation to her gun control agenda and appears so generally clueless about guns and gun law it baffles the mind that this person has crusaded against these tools for the past three decades.  To understand what I’m talking about, (and maybe save yourself 12 minutes of your life) here’s a breakdown of some of some of the biggest whoppers we caught:

1.  “We have a terrible regulatory system on these weapons.”

With an innumerable number of gun laws on the books, it’s pretty evident that regulation isn’t the problem.

If anything, the problem is enforcement of these laws. It’s cracking down on criminals, i.e. those who willfully flout the law. That’s our main problem and should be the main focus of Congress moving forward (Reid’s gun bill does contain a measure that would enhance penalties for straw purchasers), along with preventive ways to keep guns out of the hands of the mentally ill.

2.  “Can a terrorist currently buy a gun in this country? Yes. Can a felon? Yes.”

This is very misleading.

While it’s true at face value, because there are always going to be people who slip through the cracks of an inherently flawed background check system, the real question is how often does it occur? How prevalent is it?

Looking at a study conducted by Daniel Webster of the Johns Hopkins Center for Gun Policy and Research, it doesn’t happen all that often.  After surveying incarcerated offenders who had committed gun-related crimes, he found that this is how they obtained their guns:

3.  “Weapons grow more and more sophisticated over time. And the kill power increases.”

Semi-automatic technology has been around for over 100 years. And fully-automatic weapons are virtually banned* under federal law. In a functional sense, which is really what matters (cosmetic features are ultimately irrelevant), firearms have not changed or evolved that much over the past century.

“Kill power”  or stopping power is not so much predicated on the style of the gun or the platform, but on the round that the firearm fires. This is basic knowledge to anyone who owns a gun or who even has a cursory understanding of the subject.

4.  “These weapons are very attractive to people who want to remedy a grievance, who just want to kill.”

Statistically speaking, rifles of any make or model are used in less than 4 percent of gun-related homicides.

Commonly owned handguns, like the two that were used at the Virginia Tech massacre, the deadliest in U.S. history, are – if one looks at the numbers – the preferred weapon of those who want to kill or remedy a grievance.

But in all honesty, for a sociopath or a deranged killer, any available weapon is a “very attractive” weapon. Just the other day a lunatic slashed the throats and faces of 15 people with a box-cutter at Lone Star College near Houston, TX.

No, the truth is AR-15s are great for hunting, as Guns.com reader Will Carey highlighted in his essay, “12 reasons I hunt with an AR-15 (and you should too). 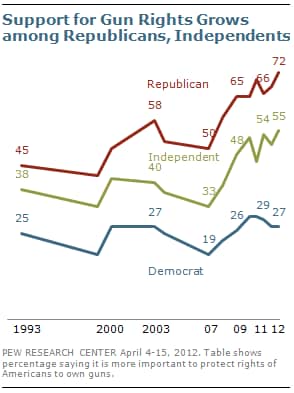 A recent poll, conducted by PoliceOne.com, that surveyed 15,000 current, former or retired police officers found that about “85 percent of officers say the passage of the White House’s currently proposed legislation would have a zero or negative effect on their safety, with just over 10 percent saying it would have a moderate or significantly positive effect.”

The overall point being, there’s a large group of folks that are not on board with tougher gun laws despite whatever Sen. Feinstein believes to be true.  That’s what the polls say.

Again, these are just a few of the half-truths and falsehoods Sen. Feinstein stated in the interview. There are more.

By now, gun owners should not be surprised by her antics. She’s been doing this for years. I suppose the only depressing thing is that she continues to get away with it.

On that note, C’mon MSNBC, where’s your journalistic integrity?

EDITED TO ADD:  Fully autos are not completely banned under federal; they are – as many as our scrupulous readers noted – heavily regulated, a fact that I’m keenly aware of.

I’ve added the modifier “virtually” as in “fully autos are virtually banned under federal law” to improve the accuracy of the statement.   That was my intent from the beginning.  In effect, for all intents and purposes, regular Joes – like myself – either cannot afford or do not have the time or patience to jump through all the hoops to get a fully auto.  Consequently, they’re not in widespread circulation and they are rarely used in any gun-related crime.

To all of those who replied, I appreciate the demand for clarification.   As Richard Feetkicker pointed out: “Words mean things.”

Indeed, sir, you are correct.