The Franchi SPAS12 Shotgun: For velociraptors, spared no expense (VIDEO)

Today everything is tactical. I mean you have tactical bacon, tactical umbrellas, tactical pens and even tactical kilts. Well back in the 1970s, when shotguns were either pump or semi-auto and they all had wood stocks, one company introduced one of the most classic combat shotguns of all time. It was called the SPAS-12.

Moreover, it’s a shotgun with a hook.

The history behind the gun 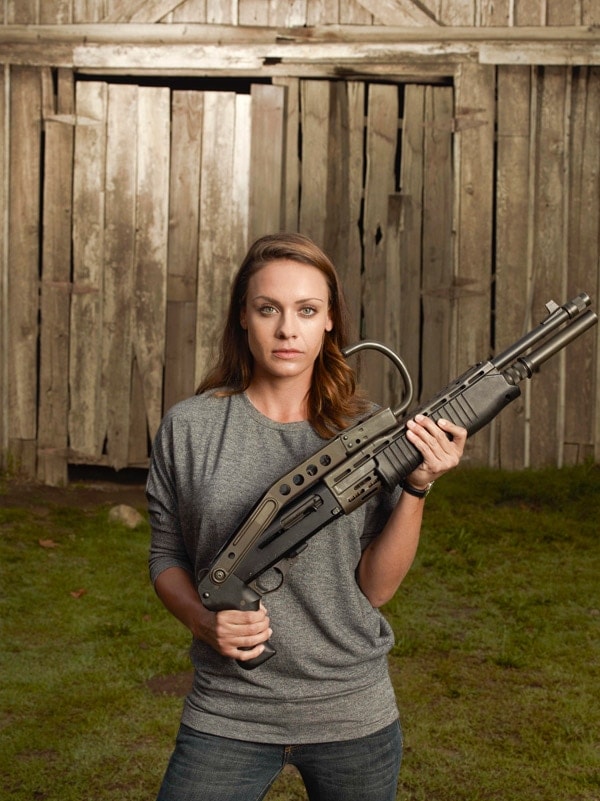 In the late 1970s, the Brescia, Italy-based firearms legacy of Luigi Franchi S.p.A. was still owned by the same family that started it back in 1868. After flirting with a number of failed submachine gun and carbine designs for the military market in the 1950s, the firearms firm had settled into the commercial shotgun niche with their Black Magic series autoloaders (still imported to the US by Benelli as the 48AL) and the Aristocrat series of over and under shotguns. With a 30-year itch coming on to offer a military design once more, Franchi redirected its experience in making some of the best scatterguns around to designing a combat shotgun. This gun was the SPAS12.

Designed from the ground up for military sales

Military and police shotguns at that time were usually commercial designs adapted for use in the battlefield or on the beat; after all the life of a military shotgun is much the same as your average duck gun in many cases. These guns are carried for miles without cleaning or even being shot, dragged around everywhere, dropped in the mud and muck, then expected to fire reliably every time under harsh conditions. Chemical salt bluing, scrollwork, small bead front sights (none on the rear) and checkered wooden furniture was common.

There were however, some crucial differences in the field to consider in workshop.  Unlike a commercial shotgun that may only have a pocketful of shells cycled through it at a time, a military shotgun in the heat of combat may 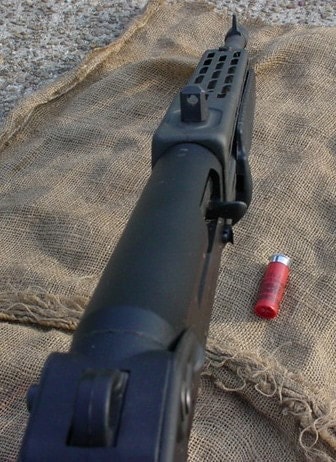 fire several dozen rounds rapidly. To accommodate this brutal use, a purpose made combat shotgun needs thicker construction and a heat shield to better protect the user from burns in the field (like when having to break from cover with a smoking hot gun). Franchi engineers also wanted to accentuate the combat shotguns known virtues—the ability to make fast shots on moving targets in the nightmare of urban combat—by incorporating oversized sights.

The SPAS12 covered all of these bases and then some: a huge heat shield, giant rifle-style front and rear combat sights, a thick and solid with phosphate coatings (with no wood or embellishments), an internal recoil buffer to help keep high power tactical loads from eating up the gun and a threaded barrel for accessories.

It also used a magazine loading door for those grunts in low crawling situations to keep debris out of that open space normally seen in commercial shotguns. The large capacity magazine tube of eight 2.75-inch shells fit flush under a European style cylinder bore, with a 22-inch barrel. To shrink this 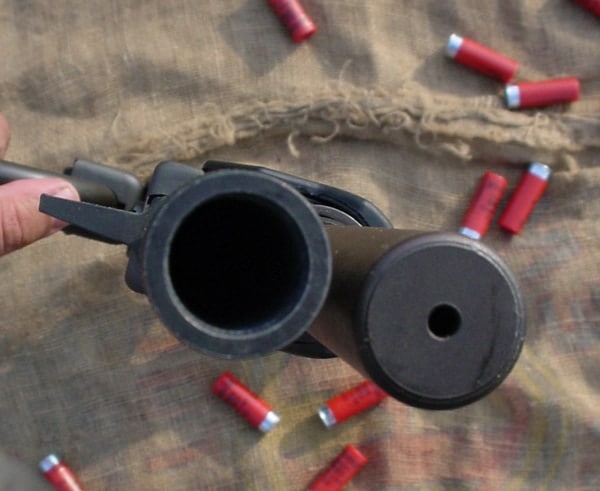 Franchi SPAS12 as seen from the front. Check out the thickness of the barrel.

41-inch long Italian beast down to size, it was equipped with an over-receiver folding stock that would chop the overall length down to a stubby 31-inches. Of course, it tipped the scales at just over 10-pounds even when unloaded, but hey, you can’t say it’s not rugged.  A Browning style magazine cut off (borrowed from the A5 design) allowed the user to choose to load directly into the chamber. This was useful for those special occasions when a breacher round or a slug is needed but the magazine is full of buckshot.

For functionality, it used a curious hybrid action that could fire as a gas-operated semi-auto, or with the push of a button on the forward handguard, as a pump action. This dual-mode operation gives the user the emergency backup to rely on the lighter recoiling gas action to fire up to 8-shots in just under 2-seconds, with the comfort of being able to manually cycle the shotgun if it fails. 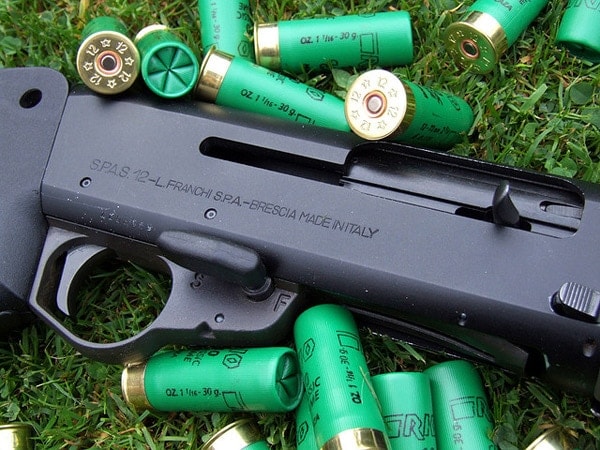 Close up of SPAS12 receiver. Note the controls.

When in semi-auto mode the shotgun required at shells with at least 3.25 powder dram equivalent to cycle it, so if lighter loads were used the pump kind of had to get involved. Super light crowd-control rounds, like rubber bullets and beanbag rounds, would also benefit from being used with the pump action. Interestingly enough the Benelli M3 convertible is the only other shotgun that uses such an action.

Franchi SPAS12 with the hook.

Hybrid action aside, there was another feature on the SPAS that was singularly unique: when the over-folding steel skeletonized buttstock was in the collapsed position, a prominent hook protruded from the end. Franchi salesmen 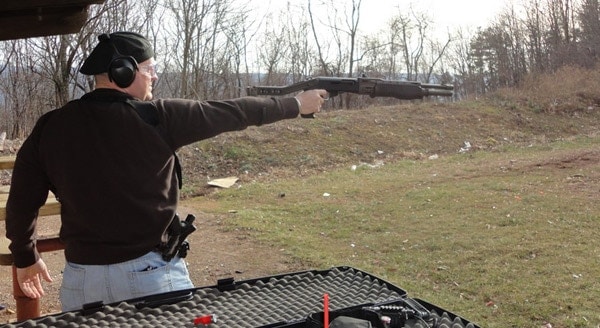 billed this hook as the equivalent of firearm duct tape—a million and one uses for every scenario. When folded, it could be used, as a carrying handle much like on the M16 (because we have seen that used so many times). The hook could also be used to store the gun or secure it to a rack. When extended it could be rotated and used to encircle the user’s strong side underarm. In theory if this was done right the SPAS could be fired one-handed with the gun in semi-auto mode and a firm grasp on the pistol grip.

Candidly, I owned one of these guns in the late 1990s, and couldn’t resist trying this out with Number 8 shot low brass.  I was not impressed. Hooks are for fish and Franchi agreed.  They sold more models without the folding stock (and optional hook) than with.

The gun went into production in Italy in 1979 and was soon picked up a few (minor) military and police customers. By 1982 they started to trickle into the US with the title SPAS12 explained as “Sporting Purpose Automatic Shotgun” to help certify to the Regan-era ATF that the gun met the post-1968 Gun Control Act’s requirement that imported guns meet a ‘sporting purpose’. The more likely explanation offered for the origin of the SPAS12 title was that it was from Luigi Franchi S.p.A. and a 12-gauge shotgun. But hey, I’m not arguing. 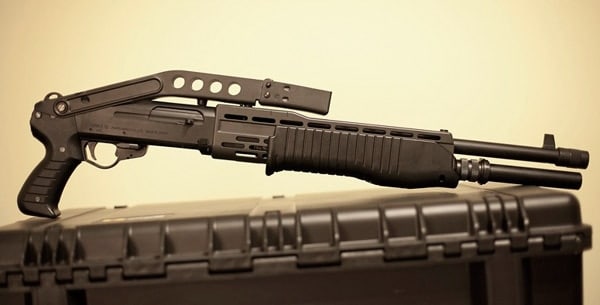 The gun gained some traction in the US with SWAT teams, police agencies with money to spend, those who wanted the groovy new gun on the rack (“It’s got a HOOK!”), and most unfortunately, Hollywood prop masters. It soon appeared in the hands of a cyborg with a German accent sent from the future to kill Sara Connor in 1984, a bunch of Elvis impersonators and a dinosaur hunter in Jurassic Park (which is currently getting the 3D treatment). This exposure and its association by the gun lobby with the unjustly vilified Streetsweeper and USAS12 put a target on the SPAS12’s hook but the fact that the gun was 2.75-inch only (whereas newer designs were 3-inch magnums), brutally heavy, cost 2-3 times as much as a good pump action 870 riot gun, and more complicated than a Hungarian Sci-Fi flick without subtitles ensured only sporadic sales.

By 1994, even though the gun was actually used for sporting purposes against Velociraptors, Senator Feinstein, and the Clinton-era Assault Weapons Ban sideswiped it. Prices shot up to the $1200 range and have never really come back down from there.

Press fast-forward to 2004 when the ban lifted and Franchi wasn’t the same company. The company itself had been sold from its founding family to a conglomerate then picked up by Beretta once the conglomerate lost its shirt. Without American commercial sales, the company had ended production of the SPAS12 and its LAW12/SAS-12 half-brothers years earlier. They went back to what worked the last time they shuttered the military firearms line—nice commercial shotguns.

You know what they say, “Those who fail to learn the lessons of history are…” well let’s just say the next tactical shotgun may not have a hook.