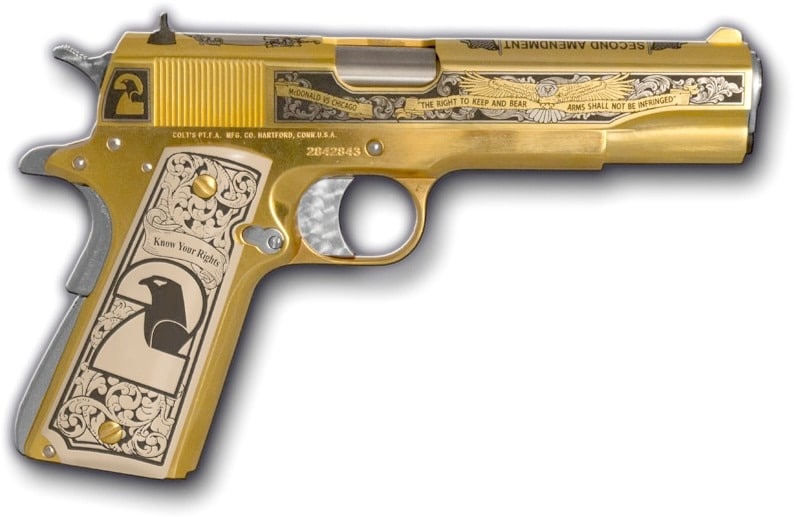 “On the left side of the slide, you will find an American Bald Eagle holding a banner that declares ‘The Second Amendment protects the rights of individuals to keep and bear their own firearms.’ The two court cases, U.S. vs. Emerson and District of Columbia vs. Heller were landmark decisions that ‘…guarantee an individual’s right to possess a firearm unconnected with service in a militia, and to use that arm for traditionally lawful purposes, such as self-defense within the home.’

“On the right side of the slide, you will find an American Bald Eagle holding a banner that states ‘The right to keep and bear arms shall not be infringed.” The court case, McDonald vs. Chicago, overturned Chicago’s ban on handguns. The Supreme Court decision stated that “The Second Amendment right to keep and bear arms for self-defense in one’s home is fully applicable to the states through the Fourteenth Amendment.'” 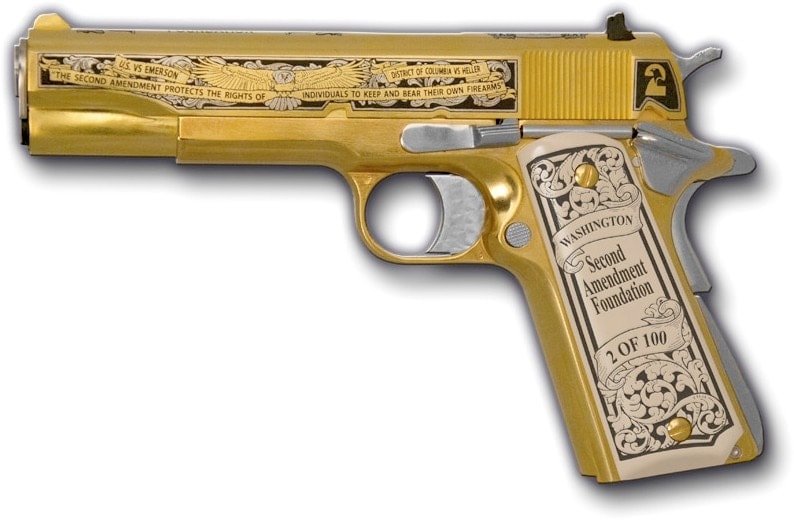 Built on a .45 ACP Colt 1911 Government Model, the pistol is fit with engraved faux-ivory handles and a jeweled hammer and trigger in addition to the having the fram plated and engraved.

American Legacy Firearms is making a limited run of these Second Amendment Foundation pistols, 100 for each state, and each state gets its own individual style of grips. The grips are engraved with the gun’s number out of 100. Every gun also comes with a custom oak display case with the gun’s edition number on it as well.

We spoke with American Legacy Firearms to get the story behind these guns.

“Well, the owner — Steve Faler — has been in the business since the ’70s and he’s always been a big supporter of the NRA and the Second Amendment Foundation — the people who give us a voice in Washington,” said Chantel Pritchett, American Legacy Firearms manager.

“Steve met Alan Gottlieb at SHOT Show a while back and they started talking, and we decided to make the Second Amendment Foundation pistol. We introduced it last year, but they’ve really taken off this year with all the talk about gun control.”

If you’re interested in having one made for you, give them a call. These guns run $1,795, which isn’t all that bad for this type of work, especially when you take into consideration how much they’re raising forthe SAF. For each gun sold, $200 goes straight to the SAF.

And they make a lot of other interesting and eye-catching firearms, too. For the Second Amendment Foundation Pistol and more, head over to American Legacy Firearms.