The 'American Joe' by Cabot Guns and Joe Faris 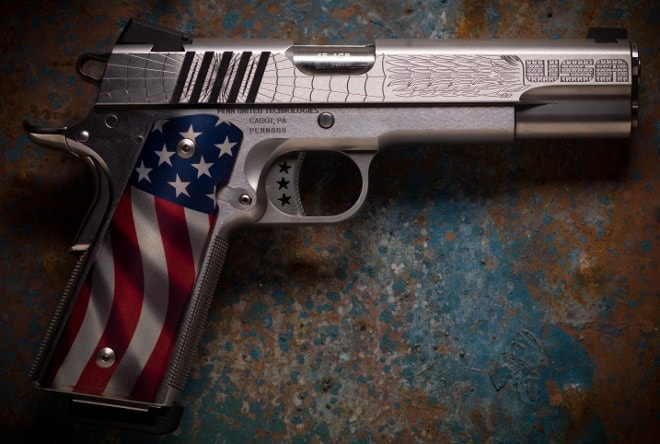 Joe Faris is a new name in the gun world, but as a designer, his work is well-known to many. The Detroit-based fashion designer was once a guest on the show “Project Runway” and works hard to bring style back to the Motor City.

It’s just that Faris isn’t going to limit himself to just clothes. Tapped by Cabot Guns, he’s designed the “American Joe,” a heavily-stylized 1911 that is covered in Motown Americana as a tribute to “American exceptionalism.”

We first spied the American Joe at SHOT Show earlier this year, a red, white and blue full-size 1911 with a brushed stainless frame and Stars and Stripes grips.

The slide is engraved with USA in a tire-pattern burnout at the muzzle in tribute to Detroits automotive industry, carried on feathered eagle wings. Behind that across the rear slide serrations is a spider’s web.

“A spiders web in nature is one of the most complex patterns and is broken down every day but built back up every night. In America we continue to build just as our forefathers did for generations.” 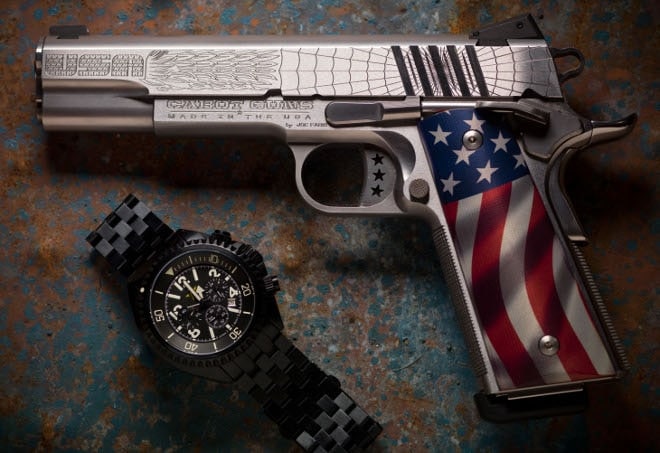 Some Detroit residents found the design offensive, like Michael Bernacchi, a marketing professor at University of Detroit Mercy.

“You tell me if there’s another city in America that is so ravaged image-wise by violence by guns. This is a toxic mixture, inevitably in the marketplace, for our image. If (Faris) wants to be controversial and or wants to appeal to the National Rifle Association, then he’s absolutely doing the right thing,” Bernacchi told the Detroit Free Press. “If there’s any other reason, this guy is insane.”

“I don’t know any other fashion designer that’s designed a gun,” said Faris. “I think it’s about raising my profile. If it helps do that. If a $7,000 gun helps to do that, then I’ll stand behind it.”

The American Joe actually retails for $7,450. Whatever Faris’ reason, the result is one singular 1911.

In addition to the 420 stainless steel construction, the gun has front and rear grip checkering, a lowered, flanged ejection port, top serrations, an extended slide stop and beavertail safety and a skeletonized hammer and “Tristar” trigger. It is, of course, chambered in .45 ACP.

Cabot makes some of the finest 1911s we’ve ever had the pleasure of shooting, and by turning to this “rockstar” designer, they’ve made one of the most avant-guard-looking pistols available today.

If you’re interested in finding out more about the American Joe or any other Cabot Guns, head over to the product page and have a look around. You might find your next dream 1911 — or at the very least, you next desktop wallpaper.