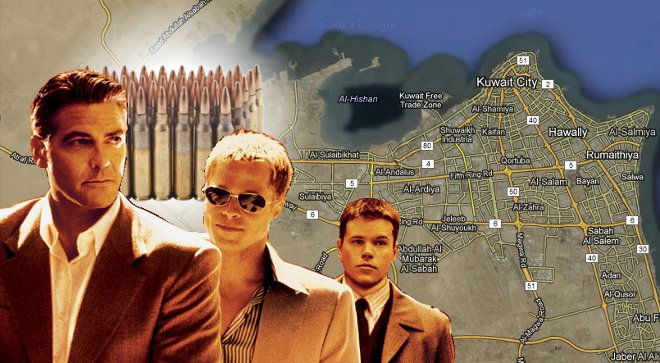 The great ammo drought of 2013 is clearly reaching around the world, as Kuwaitis turn to alternate suppliers for ammo.

The government of Kuwait is reporting that a significant amount of ammunition has been stolen from the Kazma armory, a training facility. While a larger investigation is still ongoing, at least one senior officer got fired with many others now reassigned.

An inside job is suspected as the thieves knew exactly when the shift change took place. At least five people have been taken into custody following the break-in, two Kuwaitis and three Bangladeshis employed at the armory.

The investigators said that they have some fairly compelling evidence, including testimony and fingerprints.

This follows a series of complaints filed by guards to increase security at the site, which was still under construction. The ammunition was stolen from the senior staffer’s office, which was not secured. It was supposed to have been returned to safe storage, but instead found its way onto a small truck that quietly left the facility a little heavier than it arrived.

We’re not saying they have their guy but it sounds like they’ve got a solid lead on the weak link in the chain. Investigators should look into whether or not the officer recently purchased an AR-15; a new AR and no ammo has driven people to much worse.

The Kuwaiti parliament is moving fast to root out guilty parties, cracking the whip on ministers involved in the operation of the facility to get their investigation tied up in the next eight weeks.

Minister Saad Al-Bous said, “The Interior Minister should form a ministerial committee to investigate the facts and if the committee fails to yield results in two months, we will demand the formation of a parliamentary commission of inquiry to uncover the circumstances of the incident.”

Other ministers have stated that the theft has much more sinister roots, and that the 35,000 rounds of ammo will be repurposed to destabilize Kuwait.

“We all know that there are many people who do not want to see Kuwait secure and stable. They work to sow seeds of division among the Kuwaitis to stop its growth, progress and development,” said minister Yaqoub Al-Sane. “It is clear the stolen ammunition can fall in the hands of criminals who can use it in sabotage activities and to create a state of chaos.”

It is clear that the ammunition shortage is having far-reaching consequences; prior to the drought, 35,000 rounds, by some standards, wasn’t something to stage an international heist over, it was just an amazing weekend. Today, it’s grounds for another “Ocean’s” sequel.