BREAKING: U.S. Supreme Court declines to hear case concerning the right to carry firearms outside of the home

On Monday, April 15, the U.S. Supreme Court declined to hear a New York gun law case concerning whether or not the Second Amendment demonstrates a person’s right to carry a gun outside of their home. 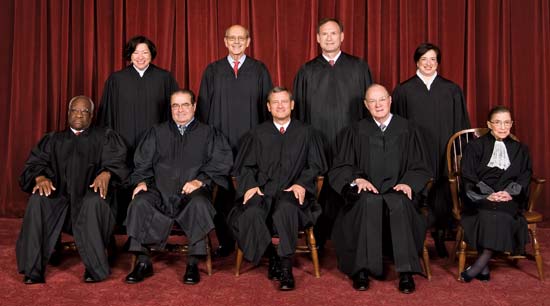 U.S. Supreme Court Justices: We hear what you’re saying, but “No.”

The case, Kachalsky v. Cacace, 12-845, was filed by a group of five Westchester County, New York residents, and while this is currently one of the biggest questions concerning gun control, The New York Times reported that the justices gave no reason for refusing to hear the case. In addition, this marks the third time that the Supreme Court has had the opportunity to answer and clarify the question, but has opted not to.

New York is what’s known as a “may-issue” state, which as the name implies, gives the state the authority to either accept or reject applications for concealed carry permits. The state requires that those applying for a permit must show “proper cause.” In other words, they must demonstrate a special need, “a good and substantial reason” for carrying a firearm, one that goes beyond just simply the inalienable right to self-defense. California, Hawaii, Massachusetts and New Jersey also have similar restrictive laws.

However, as previously noted, depending on the county or city of residency, the “may-issue” state for all practical purposes might as well be a “no-issue” state, since those applications may — and likely will — be denied. This essentially gives the state the authority to bar firearms in public places without actually, legally banning them. The National Rifle Association pressed the justices to hear the case concerning the law, which the NRA refers to as, “a de facto ban on carrying a handgun outside the home.”

In 2008 the D.C. v. Heller case resulted in the Supreme Court’s landmark decision that the Second Amendment does, in fact, demonstrate the people’s right to own firearms, a right that is retained by all citizens, not just those in an organized militia. However, the Heller case only focused on the actual ownership of firearms for the purpose of self-defense within the home, essentially ignoring the actual right to bear arms, which is restricted in many states via conceal carry permits.

New York has been at the center of much gun control controversy in recent months, starting with passing a bill with some of the toughest gun control measures, just a month following the Sandy Hook tragedy. The state then went on to offer a reward for turning in illegal gun owners, followed by an embarrassing blunder in their quick efforts to enforce restrictive measures. Top that off with the nearly 150 companies boycotting the sale of certain arms to New York’s law enforcement and the state’s decision to revoke a responsible, law-abiding father’s conceal carry permit due to his 10-year-old son “threatening” a school bully with a water gun, and the State of New York just can’t seem to stay out of the news when it comes to gun control.