It’s a numbers game at this point.  And that magic number is 60. Can Sens. Pat Toomey (R-PA) and Joe Manchin (D-WV) — the architects of a proposal to expand background checks for gun purchases made at gun shows and via the Internet — get the 60 votes they need to ensure their amendment is added to Senate Majority Leader Harry Reid’s baseline gun bill?  At this point in time, the answer is: no.

CNN, Washington Post, and POLITICO all have the two lawmakers coming up short.

Both Manchin and Toomey acknowledged that it’s going to be an uphill battle to get their peers in the Senate to jump on board with their 49-page amendment.

“I’m cautiously optimistic,” Toomey told reporters on Monday.  “We’re not there at the moment but were working on it.”

Manchin then said: “I’m talking to everybody.”

One of the key selling points of their measure is that it now has the backing of the Citizens Committee for the Right to Keep and Bear Arms, a pro-gun organization with 650,000 members.  In terms of membership numbers, the CCRKBA takes a backseat only to the National Rifle Association as far as power and influence are concerned within the gun community.

Manchin indicated that this could be a tipping point for those who are currently on the fence or for those who were initially opposed to expanded background checks.

“Some of them [senators] who might not have voted for cloture [in favor of the GOP filibuster] might be more receptive once they see the facts,” Manchin explained. “Now that we have gun groups coming out in support, it really helps us.”

Manchin and Toomey are also hoping to get a bump from silver-tongued, Vice President Joe Biden who – according to Democratic aides – is personally calling senators and urging them to support the measure.

So, with all that said, how does the voting breakdown? 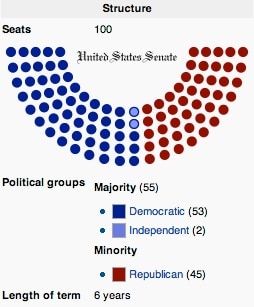 Well, the Washington Post conducted its own analysis and found that only 21 of the 100 Senate votes are in play, “The 16 Republican senators who voted last week to proceed with debate and six moderate Democrats who face difficult reelections in 2014 or represent rural states with strong gun cultures and would face strong political pressure at home for supporting new gun-control legislation.”

Of those 16 Republican senators, 9 of them have formally said that they will vote against Manchin-Toomey (POLITICO reported that number to be 11).

Thus far, none of those six moderate Democrats have publicly stated how they’ll vote.  If you’re keeping track of the math that means there are roughly 50 in favor of the measure with 40 against it and 10 up in the air.

In short, it’s going to come down to the wire.   And if you’re an oddsmaker, it might be fair to say that the chances of Manchin-Toomey getting 60 votes is roughly 50/50.  A coin flip.

A vote on the Manchin-Toomey amendment is expected to happen by week’s end.