Room clearing is one of these must have skills for gun owners intent on keeping their home secure—among defense instructors this is not a point of debate.

However, with technology always advancing, our knowledge base always widening and the world constantly changing, there comes times when every shooter has to ask, are the basic rules of room clearing still relevant i.e. are the old school, tried and true tactics really the best tactics?  Well a nostalgic walk back through our defense training history (well, nostalgic for LEOs anyway) can reveal some surprising answers.

When I was first taught room clearing, slow and deliberate were the buzzwords and, in service of these virtues, we practiced the dreaded ‘duck walk’ endlessly.

Walking with knees fully bent and ankles and gluts nearly touching each other, drilling the duck walk was particularly painful for those with knee injuries and even those just not so young and spry as they used to be. Pain is one thing (no pain, no gain) but the duck walk also quickly leads to fatigue and I found that you tend to focus more on quad burns and muscle aches then the threat at hand.

So, what are the benefits? A low profile? A smaller target? Yes. Absolutely. Shooting from an extremely crouched and squatted position is fine, even ideal in many situations, but the option to move rapidly is diminished when you assume the classic duck walk squat. Considering the aforementioned pains, taking a knee does the job just fine and with a steadier base to fire from. 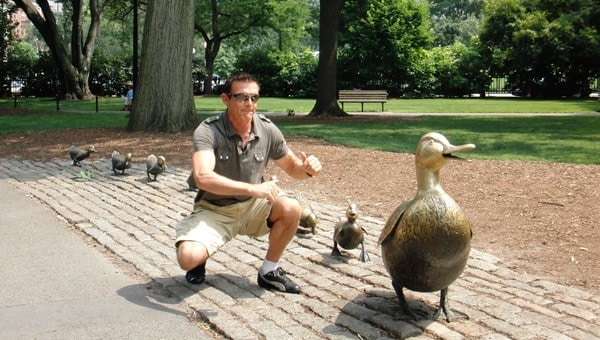 Greg Carver does the duck walk.

What’s the answer?  Well, standing and walking with legs more fully extended, (think Groucho walk vs. duck walk), has been making more sense to tacticians in recent years. The bottom line is, when it comes to animals and positions, ducks aren’t all that tactical.  Man was meant to walk upright, and to maintain your mobility, save the squatting for Russian dancing, not room clearing.

The quick peek has obvious benefits. Shooters can rapidly check an area by thrusting their head around a corner rapidly enough to get eyes on their target and fast enough to avoid fire. If they have to check twice, a shooter can peek again, but in a different spot along the vertical plain of the corner.

Good enough? Sure. But the drawback is that there is no gun involved with this technique. The quick peek is meant to be so fast that a lethal option isn’t necessary, however, this has proven time again to be a failed assumption. Should the threat be standing directly near the corner where the quick peek is initiated, the ‘peeker’ won’t have a gun on the threat while the attacker most definitely have his gun aimed at the newly revealed position and likely get the jump on the shooter.  Walls and doors oftentimes do not stop bullets.

But then there is also a real draw back pie-ing—the corner nearest to you won’t be totally cleared.

Slicing the pie only goes so far as there will always come a point in the geometry of building and barricades navigation, where the shooter cannot fully see what’s hugging the corner.  An old school option is hybrid of two classic techniques: pie and then peek around a corner. The gun can still be at the ready or a compressed ready position and the shooter can clear the corner after scoping out the room but before entering. Pretty good option, wouldn’t you say? 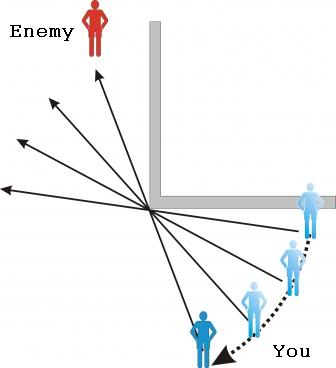 It is, but it is also not without disadvantages.  While clearing the left side, for example, the shooter will be exposed to what’s “down range” in the room but even more dangerously, blind to what’s on the right of the wall or barricade. A sort of tunnel vision effect can take place in these scenarios where shooters focus on specific locations (like behind the left side of a door) while shutting off their periphery. Depending upon the location, situation and terrain, however, clearing the backside of the obstacle or the near corner of the other side of the wall with a combo pie and peek may be the best way to go… if you are alone.

If you are working with a partner or team, the myopic aspects of room clearing techniques can be avoided by working in concert. A second shooter can keep a gun and a pair of eyes on any blind spots and cover in front of the shooter doing the peek around.

Today however (or at least for the past several years) it’s important to note that when a tactical team knows a threat is in a room, they often forego this type room clearing entirely.  Instead of wasting time checking the corners, these shooters will simply enter the room or past the obstacle and address any threats immediately. Even though they practice the fundamentals of a slow and deliberate clearing technique, speed and surprise are deemed to be more tactically important. Besides, a team of two or more entering a room can intimate and shock any would-be attackers.

But how do these tactical teams know that there is somebody in the room?  Many use a mirror on a boom pole. This is why, despite the dynamic entry, room clearing is still in many ways slow and deliberate.  These shooters can take their time to count the threats and ensure the corners are cleared prior to putting themselves in greater danger.

When shooting around barricades or even conducting room entries, it was taught for several years—and still is in some cases—to switch hands if holding a pistol or use bilateral shoulder shooting if sporting a long gun. The thought was that people should shoot left handed around the left side of a wall or barricade, thereby lowering their profile. Doing so helps keep the body behind cover, but, with a proper pie-ing technique, there’s only really about two inches sacrificed (and that’s if a right-eye dominant, right hand shooter is pie-ing around the left side of a barricade).

Because it takes some practice and some practical know-how to slice the pie well, many instructors just have students switch hands; admittedly it is sometimes taught because of a that’s-the-way-we’ve-always-done-it philosophy. But under stress cognitive skills rapidly deteriorate. Muscle memory takes over.  In some cases, anything viewed enough times on TV (but never practiced) becomes the reaction and the reality. 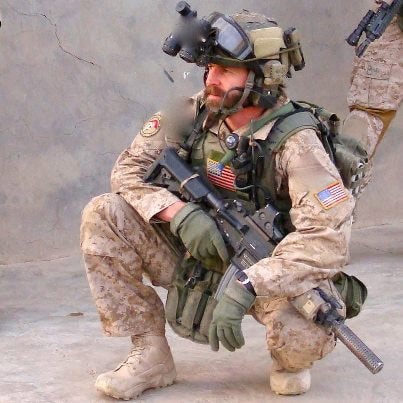 Some people can switch hands and shoot incredibly well, but it takes a lot of practice and, on the professional level, literally hundreds of thousands of rounds. Even then, they might not be able to do it under stress. That’s why when the question was posed to Tom Spooner, a former Delta Force member and co-founder of Invictus Alliance Group, he explained that some people might be able to switch hands or switch sides (bilateral shooting) well, but that he never has done so in any tactical scenario.

A few cliche sayings come to mind when addressing old school tactics. For example, “old habits die hard,” and “you can’t teach an old dog new tricks.” That said, even if it’s ‘old school’, you should never challenge the old guys with a bunch of defense / military certificates on their walls about tactics. They’ve been around the block. They know a lot of different options and they have a sizable toolkit of knowledge, tactics and experience to draw from so question their judgment at your own peril.

But I also know that some are still saying, if it worked for years with good enough results, why not keep it? The answer: because good enough isn’t always the best.  Like anything in life, improvement is constant and whatever a shooter learned about tactics years ago may have slowly evolved along with terrains and the situations. So how does a shooter keep relevant? Staying aware of the latest tactics is important (which is why reading Guns.com is an important element in your tactical repertoire) and keep up with your formalized training.