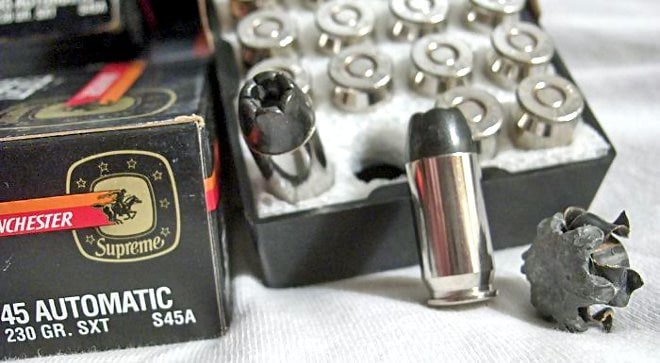 In the massive surge to draft new gun control legislation across the nation, you could be forgiven for not noticing the local San Francisco push to ban hollowpoint ammo.

Specifically, the new law bans Winchester Black Talons. This is interesting if for only the fact that Winchester hasn’t made Black Talon ammunition for two decades.

Why ban the sale of practically nonexistent ammo? California’s history of shooting sprees is at the heart of the issue. Following the 101 California Street shooting, where Gian Luigi Ferri used a blend of ammo, notably including Black Talons, along with a pair of modified TEC-9s to shoot up the wrong office, killing eight people and injuring six others before committing suicide.

And that is why the legislation specifically targets one brand of ammo. It also bans the sale of any ammo “that has physical properties resulting in ballistics performance identical to such ammunition.”

While that could potentially encapsulate modern hollowpoint ammo, it’s not likely to. Although Black Talons were the predecessors to Winchester’s current lines of expanding ammo, including Ranger-T and PDX1 hollowpoints, Winchester’s recent designs are not “identical” in performance by any indication.

The fact of the matter is that bullet design has continued to develop and improve, yielding new products that perform much differently — that is to say, better — than the old Black Talons. And anything not Black Talon is on the OK list, unless it’s for departmental use.

The bill goes on to ban the commercial sale of ammo that’s labeled “for law enforcement only,” unless you are indeed in uniform. This is where things get a lot more vague (.pdf).

“Ammunition designated by its manufacturer for purchase by law enforcement or military agencies only, unless other ammunition is available to the general public that has physical properties resulting in ballistics performance identical to such ammunition.”

This is awkward because you’d be hard-pressed to find two cartridges from the same box that have identical ballistics performance. And identical how? Compared to factory numbers? Compared to the performance of the cartridges operating in your firearm? And what’s being measured? Velocity? Penetration in ballistics gelatin? Retained weight?

While the ordnance doesn’t codify the definition of identical performance, it does charge the city with creating a list of prohibited ammo types. This doesn’t mean that ammo not on the list is safe to own, which is why the NRA is currently filing suit against the city.

“[The] NRA sought more specific information from SFPD, but it wasn’t provided in the SFPD’s letter. For example, NRA experts inquired about the testing procedures that would be performed to determine whether ballistics performances are identical in all respects. And NRA sought detailed information regarding the ballistics performance for Black Talon ammunition to allow the City to establish a baseline for comparison with other ammunition. The SFPD didn’t produce this information, because it most likely hasn’t (and won’t) take these steps. And if the SFPD does decide to engage in such testing procedures, it is a virtual certainty that ammunition performance will not be ballistically identical to Black Talons in all respects.

“The NRA is already suing San Francisco over the unconstitutionality of its existing ban on the sale of hollow-point ammunition and its requirement that all handguns be kept locked up in the home when not being carried. That case, Jackson v. City and County of San Francisco, is currently before the Ninth Circuit and seeks to resolve many of the issues left unanswered by the Supreme Court in Heller v. District of Columbia.”

In fact their “We don’t know what’s illegal ammo until we see it” policy has already been singled out as potentially unconstitutionally vague. Penalties for possession of to-be-determined banned ammo can be up to $1,000 and six months in prison.

One thing’s for certain: if you’re in San Francisco, or just passing through it, you had better cycle out your 20-year old self-defense loads for something less illegal.

For that matter, if you still have any Black Talons, you should put them in a box with your Members Only jacket and gasoline jeans and dispose of them safely. It’s time to let them go.