Two men met in south Forth Worth to complete a Craigslist transaction on Tuesday afternoon, but the meeting ended in both men being shot, one fatally, after the transaction turned into what police call “a robbery gone bad.” 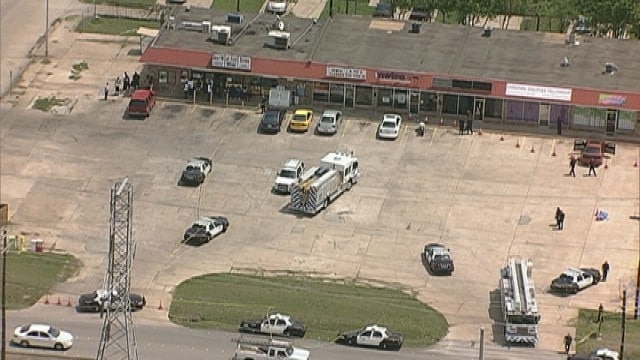 The local Fox affiliate reports that the two met at the Metro PCS store, which sells cell phones and wireless service, a little before 1:00 p.m. One of the men had agreed to sell the other man a cell phone. The man who was to buy the phone was a valid Concealed Handgun License holder and was carrying a gun, just in case, when he arrived at the store.

20-year-old Desmond Paige claimed that he had a cell phone to sell to the other man, but according to the police, when the two met up to complete the transaction, Paige apparently attempted to rob the other man instead.

There are conflicting reports about whether or not Paige was armed, but detectives have identified him as the robber. However, the CHL holder was shot in the wrist, although it’s not known if he accidentally shot himself or was shot by Paige. Paige was shot several times in the chest.

One witness, who did not wish to be identified, heard the gunshots and called the police. She went to help one of the men, the CHL holder, when she saw him holding his wrist, falling to his knees and asking for help. She stayed with him and applied pressure to his wound until paramedics arrived.

Another witness went to Paige’s aid when she saw him lying in the parking lot. He was bleeding from his mouth and chest. She kneeled next to him, telling him to hold on and that the ambulance and police were coming.

Paige died at the scene and the CHL holder was taken to a nearby hospital in Fort Worth to be treated for non-life threatening gunshot wounds.

Fox 4 News also reported that a criminal check revealed that Paige had recently been released from prison after serving time for a violent crime. He was currently on parole.

Police have not stated whether the CHL holder is expected to face any charges for the shooting.