With recent talks of budget cuts, fiscal cliffs and sequesters, and the potential for sweeping Federal gun control, Arizona lawmakers have come up with a creative, yet controversial, way to increase revenue and reduce government waste: To resell the guns turned over in gun buyback programs to the public instead of melting them down. The measure was approved by the state Senate on Tuesday by an 18-12 vote and was approved by the state House last month.

Supporters state that it is a waste of money to hold gun buybacks, only to turn around and destroy the guns that have been collected.

During a buyback in January, Arizona officials collected more than $10,000 worth of firearms, two of which were found to be stolen. The state offered grocery store gift cards in exchange for the firearms and high-capacity magazines: $100 for handguns, shotguns and rifles, $200 for assault weapons, and $10 to $25 for high-capacity magazines that accompany a weapon. However, the funds – for this buyback anyway – were from private donations, not taxpayer money.

Three more gun buybacks are currently scheduled to take place in May. In addition to getting unwanted guns out of the hands of citizens, the program will also offer free gun locks, as well as lessons on safe storage of firearms.

Opinions vary on the effectiveness of the buyback programs. Hildy Saizow, president of Arizonans for Gun Safety, states that the goals of the program – to have a safe place to get rid of unwanted firearms and to increase gun safety at home – “are important, if not critical, to public safety. This is how we can actually save lives.”

However, president of the Phoenix Law Enforcement Association, Joe Clure expresses that the buybacks, “Make people feel good, but they do nothing to reduce violence on the street. The reality of the matter is gun buybacks are doing zero percent for public safety.”

Even Arizona lawmakers aren’t all on the same page about the buybacks either.

Sen. Olivia Cajero Bedford, D-Tucson, cites a study that links loose gun laws to deaths by gun violence, and identifies Arizona as having the fourth-highest rate of gun deaths in the nation.

Yet Sen. Judy Burges, R-Sun City West, states that those who are blaming guns for taking lives are missing the point. “Many here in this body want to blame 30-round magazines and semiautomatic weapons for violence, based on their desire to deal with things that can be controlled. Unfortunately, murder, violence and insanity are built in to the human condition and likely always will be.”

And yet Sen. Rick Murphy, R-Glendale says that it’s not about gun rights at all, but rather property rights. “It’s about protecting taxpayers. It deals with valuable property that is being destroyed … for no good reason, to accomplish nothing other than to make people feel good.”

While gun buyback programs have certainly been a hot topic in the news recently, they aren’t anything new, at least not in Arizona, who has held them for years. 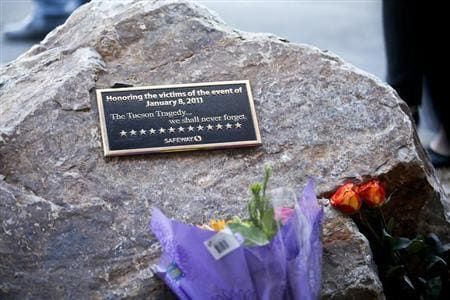 Arizona has also been at the center of much of the latest gun control debate, starting with a Tuscan shooting in 2011 that killed six people and wounded former Representative Gabrielle Giffords.

Giffords and her husband, retired astronaut Mark Kelly, have formed the non-profit Americans for Responsible Solutions in addition to being active advocates for changes in gun laws. Of course, Mark Kelly has done his part to keep unsafe guns off of the streets and out of the hands of criminals as well, all without the use of buyback programs, taxpayer money or grocery store gift cards.