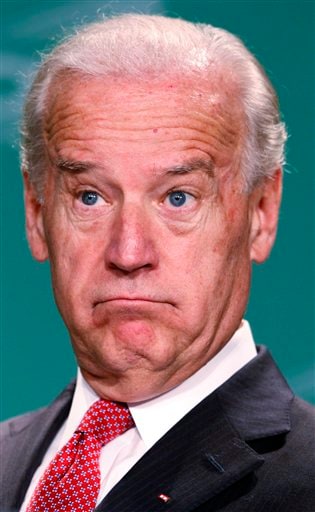 Vice President Joe Biden: ‘The president is already lining up some additional executive actions he’s going to be taking later this week.’

It was reported earlier today by Buzzfeed.com that Joe Biden told a group of ‘stakeholders’ on a conference call that the President is preparing a new group of executive actions in response to the Senate’s failure yesterday to move forward on any gun control initiatives.  As you can see in the block quote below, Biden is referring to possible actions on mental health funding and possible tweaks to the background check system.

The White House responded to Vice President Biden’s comments stating that President Obama has no plans for any additional executive actions beyond those presented in January.

So whose statement do you trust more, Obama or Biden?

“Look, I know you’re going to say that I’m just being an optimist and I’m trying to put a good face on this. But, you know, I’ve been around here a long time and we’ve already done, because of you, some really good things,” Biden said. “Number one, the president is already lining up some additional executive actions he’s going to be taking later this week.”

After the Newtown shootings, Obama took a number of executive actions to expand research into gun violence and other areas favored by the gun control community. He took the actions without congressional approval, leading to outrage by some conservatives.

Biden mentioned several areas where executive action has been taken, including helping schools that want them to hire more armed police offers and training teachers to identify and treat possible future school shooters.

“Secondly, we also have pushed forward grants for new and available funding for dealing with training teachers and dealing with alerting them to high-risk, you know, kids in their communities and their school that are signs that they’re going to have a real problem and may be the very kids you need to get to now before they end up like an Adam Lanza,” he said. “We also are going to have a national mental health dialogue where we’re going to vastly expand mental health availability under the Mental Health Parity act as well as the Affordable Care Act.”

Biden said the White House is looking at ways to increase the number of people denied the right to buy a firearm under the current background check system.