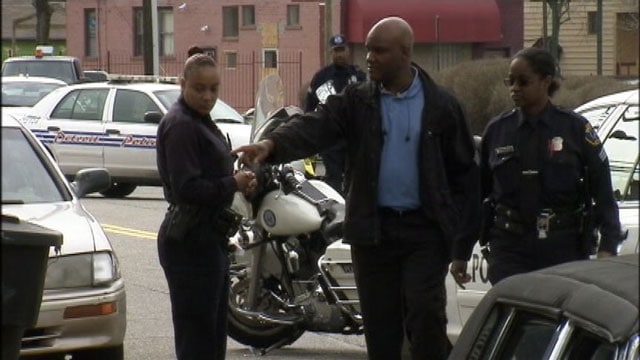 Tyrone Gray, an off-duty police officer, who stopped an elderly woman from being attacked by pit bulls. (Photo credit: My Fox Detriot)

An elderly woman is lucky to be alive after she was brutally attacked by two relentless pit bulls on Tuesday afternoon.

Witnesses say that the dogs were beaten with a pipe and an automobile anti-theft device similar to “The Club” in an attempt to stop the attack. One man even tried to hit them with his car, but it wasn’t until the dogs were shot that they finally stopped mauling the woman.

The incident happened in Detroit’s east side, about 7 miles away from downtown, where 64-year-old Jessie Clarke was sitting on her front porch when the dogs unexpectedly attacked her.

Family, neighbors and even passerby’s tried everything to help the woman, but it was of no avail until Tyrone Gray, an off duty police officer who just happened to be passing by, stopped to help. He pulled out his revolver and shot the two dogs, a total of five times, finally stopping the attack. At which point Clarke had already suffered severe injuries to her face, head and arms.

One dog died at the scene, while the other dog, which was bleeding profusely by what was believed to be a shot in the head, ran off into a nearby school building. That dog was later captured by authorities and is still alive, reported Michigan Live.

Neighbors said that the dogs lived in a nearby abandoned middle school that’s currently undergoing renovations. And apparently this isn’t the first incident with these dogs. Residents said that the dogs are often found wandering through the streets and have even chased some of the neighbors before.

However, when a local Fox affiliate interviewed an employee for the contractor who is working to renovate the school, he said that the pit bulls, which attacked Clarke, aren’t the same ones that usually inhabit the school. He also explained that the dogs are owned by another employee and that they are dropped off at the school when the workers go home to protect it from scrappers, people who steal scrap metal.

Clarke’s family and friends know that if it wasn’t for Gray being there and being armed with his revolver that the situation could have ended much worse.

Gray said, “In my 15-year career, this is probably the worst situation I’ve ever seen in my life. I’ve seen a lot. But to see this, it really touches my heart.”

Clarke remains in a local hospital where she is said to be in critical, yet stable condition.

There is no word yet on who owns the pit bulls, and authorities have not said if that person will face any charges when they are found.