The Remington 1100. After 50 years, and millions of guns, the venerable old shotgun is still a fan favorite. The gun’s dependability, light recoil, and ability to cycle almost anything has made the 1100 a go-to for hunters and sportsman for half a century.

And now the folks at Remington is celebrating their predecessors’ accomplishments with an anniversary edition of the 1100. This isn’t a gun that should be dressed up. But the commemorative 1100 has just enough decoration and significance that it will be collectable.

I’ll be darned. Field and Stream dug up this old Remington gen.  It’s long.  But worth it.

Remington put together the piece as an extended plug for the 1100 at a time when there was very little way to actually disseminate the message.  This is 1963.  Television is growing in popularity, but it is hard to imagine this spot running as a commercial.

And I just have to revel for a moment in the sincerity.  My favorite moments come at the 7:15 mark, when we’re asked to believe that they test the DuPont “bowling pin finish” by setting up 1100 stocks, ten-pin style, and knocking them down like Jesus Quintana.

And the computer.  The gargantuan mainframe beast that requires dry ice to keep it cool.  A computer the size of my house that has less memory than my watch.  That is some serious technology.

But this is the point, right?  This technological wonder, “the computer” used to design the Remington 1100 now looks like a brontosaurs.  Yet the 1100 that there hooking up to the oscilloscope looks like a Remington 1100.  It looks exactly like my uncle’s 1100, a gun that’s just as capable of knocking down deer today as it was when he bought it in 1965.

This is an easy one to answer: it is still here.  But it had to be a gamble in 1963.  The 1100 was the first practical and widely accepted gas actuated automatic shotgun.  Before thew 1100, and for the first half of the century, automatic shotguns had relied on Browning’s basic recoil operated design.  The Auto-5.  Remington had even licensed the design and made it their Model 11.

But the Auto-5, which deserves a lot of respect, had one problem.  If you wanted to use different loads, the A-5 needed to be physically adjusted.  Friction rings had to manipulated, and positioned just right.

After the initial 12 gauge 1100, variations were made in 20 gauge, 28, an .410.  All four are still being made now.  And if you don’t like walnut, there are other options.  Like many guns that have existed for half a century, there are way too many deviations to even count.  Understandable when you add up the production totals.  Remington has made more than four million 1100s.

The 50th anniversary addition Remington 1100 is handsome.  The engraved receiver is gold filled, and the artwork is based on designs built into the two millionth 1100 produced, which is on display at Remington’s museum.  The serial numbers have been marked with an homage to the gun’s first production year.  The B-grade walnut stock is finished like a bowling pin, in case you want to take it to the lanes and knock it around a bit. 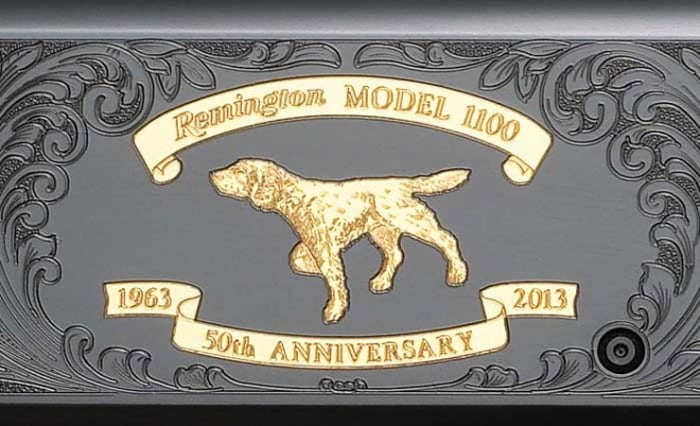 Yes sir, that sure is a real shotgun. It’s enough to make a man quit work.

Somehow or other it is always time to go.  But maybe we’ll get back tomorrow.  You better get down to your dealer today if you want to take a look at the greatest automatic shotgun ever made.

Or maybe you already have a 1100.  If you do, I bet you have a story to share in the space below.