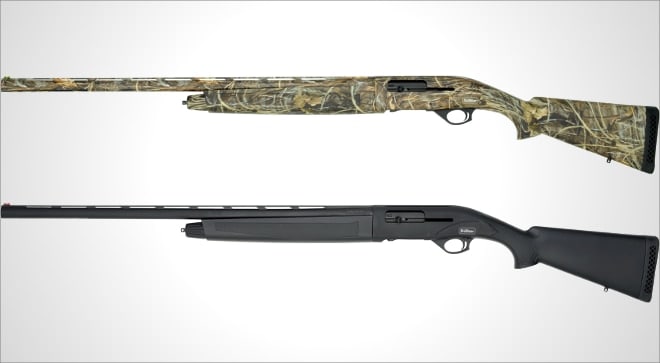 TriStar’s adding a pair of left-handed semi-automatic 12-gauge shotguns to their catalog, expanding on their Viper G2 series.

The two shotguns are functionally identical but one is flat black and the other has a leafy camo pattern finish.

“The Viper G2 has proven to be dependable when hunting game birds and shooting sporting clays since the product was first launched in 2009,” said Gus Bader who owns TriStar Arms. “For any hunter or target shooter who is interested in a firearm with multiple functions, superior construction and is a fraction of the cost of other guns with the same features, the Viper G2 is it.”

TriStar’s shotguns have been growing in popularity as their construction is on-par with much more expensive models from bigger brands, while still often coming in under $500.

Like the other Viper G2s, the left-handed models have chrome-lined barrels and chambers and accept up to 3-inch magnum shells. The 28-inch barrels are fit with vented ribs and a front fiber optic bead sight. They’re threaded for chokes and come with three, improved cylinder, modified and full.

The magazine holds five shells and has a manual magazine limiter that makes it easy to comply with hunting regulations, but includes a magazine plug if necessary. It also has an end cap with a sling swivel stud built in. Unloaded, the Viper G2s weigh 6.8 pounds.

If you’re a left-handed hunter on a budget, or just want a shotgun for southpaws, check out TriStar’s new models. With a suggested retail price of $550 for the black and $630 for the camo, we expect these to have real-world prices closer to $450.

If you’re not a left-handed shooter, TriStar offers plenty of standard shotguns, including the recently-announced TEC 12, a hybrid semi-auto/pump-action tactical shotgun that we thing is pretty damn cool.

For more information about the TEC 12 check out TriStar’s product page. Whether you’re interested in it for it’s novelty or because you want one shotgun that can cycle it all, you definitely want to check out the TEC 12.